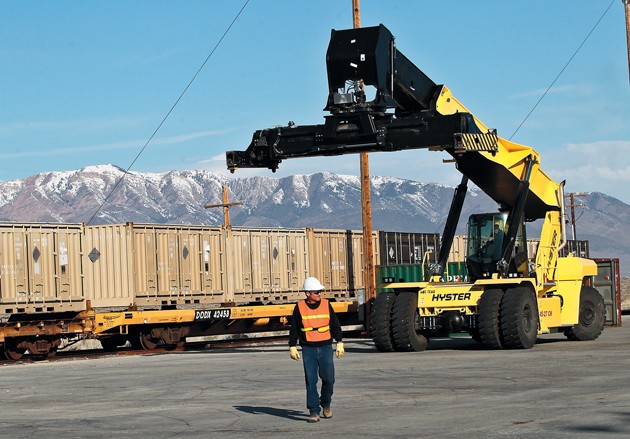 Furloughs of two days per pay period, called for in the automatic budget reductions known as sequestration, will drop federal workers’ income by 20 percent, said Lee Lemmon, president of the American Federation of Government Employees Local 2185.

“That’s going to be a hardship for many families,” he added. “Most federal employees in Tooele have already experienced a 15 percent pay reduction when they lost overtime work a year ago.”

The average age of a worker at the depot is 49, according to Lemmon.

“At that age they have worked for the government for several years, and if they leave to find new employment, they will lose all the retirement benefits they have built up,” he stressed. “It’s going to mean tough times for some families.”

Miceal Unrein has worked at the depot for four years. He has a wife and two children, ages five and seven.

Miceal Unrein and Lee Lemmond, members of American Federation of Government Employees, talk about potential effects of government sequestration Wednesday at the union office. Sequestration could mean a drop of about 20 percent in income for federal workers like them.

“The depot provided us with classes to learn budgeting and how to save money, but it is still going to be hard,” said Unrein. “If sequestration happens it will mean no more family vacations, we will buy less food and gas, and have to be more careful about making trips to the doctor with our children.”

For depot workers, the plan for furloughs means they will go from working four ten hour days to five eight hour days. Fridays will be the furlough day of each week.

Essentially, employees at TAD will still work four days a week, but for eight hours instead of ten, according to Kathy Anderson, TAD public affairs officer.

The depot has already instituted several cost saving measures, including deferring maintenance, eliminating overtime, not filling vacant positions, and canceling a program that hired local students to cut grass during the summer.

“I had a call from Dugway warning me that if the furloughs happen, they will have to send a lot of their people to the food bank for assistance,” she said.

The furloughs will not only affect families in Tooele County but will also remove a significant amount of money from the local economy.

Department of Workforce Services statistics show that there are 1,634 federal jobs in the county with a combined annual payroll of $26 million.

A 20 percent reduction in the federal payroll will mean $5.2 million less in federal pay for county families. Most federal employees at Tooele County federal installations live and work in the county.

At TAD, 76 percent of its federal employees live in the county, according to Anderson.

Lemmon noted, “That means a lot less money being spent at local stores.”

The threat of furloughs comes at a time when Tooele County is showing signs of pulling out of the recession.

Also, sales tax revenues in the county increased by 8 percent in the third quarter of 2012, according the Utah State Tax Commission.

The furloughs have created a morale problem for federal employees, largely because of uncertainty, according to Lemmon.

Originally scheduled to take place in mid-April, the furloughs were delayed and are now scheduled to start May 5, unless Congress intervenes, said Lemmon.

Many families of federal employees have already stopped making a lot of ordinary purchases out of fear, noted Unrein.

“I wish Congress would just make up their minds and tell us yes or no so we can make some definite plans,” he added.

The sequestration effects may be lightened for Department of Defense employees. Yesterday the Associated Press reported that Defense Secretary Chuck Hagel will reduce the number of furlough days from 22 to 14.

The change is made possible by recent budget adjustments passed by Congress. The AP cited defense officials, who spoke on condition anonymity because the decision has not been made public, as its source.