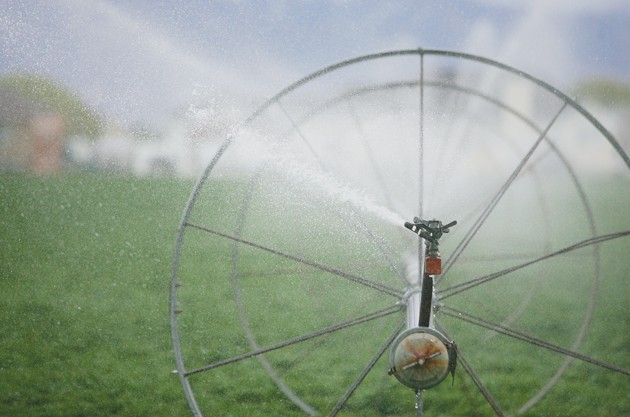 Hotter temperatures and increasing demand has prompted Settlement Canyon Irrigation Company to restrict water use for the rest of the growing season.

“Last week it dropped 18 inches and the week before it dropped 12 inches,” he said. “At that rate we would be out of water by the end of July.”

Under the restriction, residential and agricultural shareholders are prohibited to use water from 7 p.m. Fridays to 7 a.m. Mondays until further notice.

Also, the irrigation company has divided Tooele City into four zones with specific user days and times. They are as follows:

Furthermore, farms are limited to Mondays through Thursdays from 8 p.m. to 7 a.m. Tooele City is allowed to water parks and the cemetery on Monday and Thursday nights.

Schools, churches and the Rocky Mountain Care Facility can water Wednesdays from 7 a.m. to 6 p.m. and Fridays from 11 a.m. to 3 p.m.

For agricultural use, farmers can use one sprinkler head for every two shares, and users must have at least four shares per acre. Two or more acres is considered a farm by the irrigation company.

Bevan noted that in years past when this same restriction plan was implemented, “we’ve made it. If people live by it, we’ll get by.”

In addition to the arrival of hotter temperatures and shareholders’ increased water use, Bevan said the absence of good snowmelt and some key springs not producing normal flow have contributed to the situtation.

“The Rocky Ridge Spring never came in this spring, and other high water springs have started to dry up, too,” he said. “Hopefully, when we get the pipeline in, that will make a difference.”

Before fall, the irrigation company is scheduled to install a new two mile-long pipeline from springs at Sawmill Flat in Settlement Canyon to the reservoir. Bevan is expecting the $1.06 million project to add about 270 acre feet per year (about 336 gallons per minute) to the reservoir.

“If we had that pipeline in right now, I’m convinced we wouldn’t need restrictions,” he said.

But until then, Bevan stressed that water users are vigorously encouraged to conserve and to adhere to the restriction. Those who don’t will be given only one warning to comply. A second offense will result in a loss of irrigation water for the rest of the season.

The irrigation company has approximately 870 customers who own 4,400 shares.

At Grantsville Irrigation Company, the situation is not so dire. According to Watermaster Lynn Taylor, the reservoir is currently five feet below being full. Because residential users are on meters, the irrigation company knows exactly how much water is being used.

“The way we manage it, we’ll have water to the end of October,” he said. “We will read the meters in July and we’ll caution those who are getting close [to using up their seasonal allotment]. Those who are over, we’ll shut them down. … It’s up to them to conserve and use their water wisely.”

This year, the seasonal allotment for a residential user is 250,000 gallons per share. It normally is 325,900 gallons. The allotment is determined by Taylor and the irrigation company board each year based on snowpack and precipitation totals.

The irrigation company has approximately 1,400 customers who own 10,197 shares.