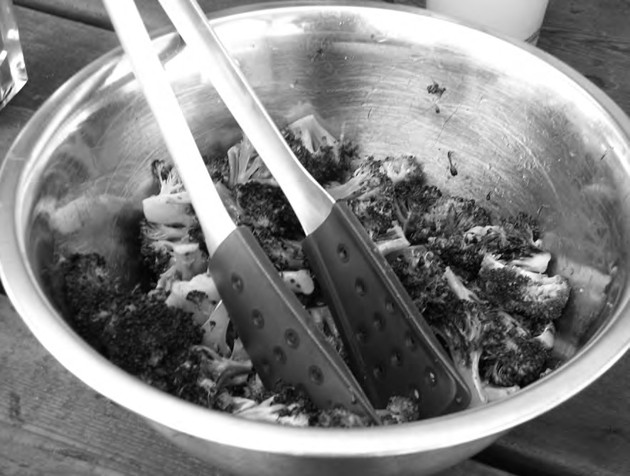 Cooking broccoli in dry heat enhances the sweetness of the vegetable. Roasting it with herbs, breadcrumbs and cheese gives it a different flavor and texture.

What are those bright, green, tree-looking things that keep appearing on our plates? They look good and they taste good — who knew?

Broccoli is practically a staple vegetable these days. It is a favorite side dish on plates at restaurants where its bright green shades make for a colorful serving plate. Put it with a few carrots and perhaps some crookneck squash and it really makes a dining statement. It also pairs well in casseroles and with chicken and other meats. It is also a “regular” on salad bars adding some crunch and color to a salad plate.

Many people like it cooked but not raw, or they prefer it raw to cooked. And the “little green tree” thing just might appeal to children who like to imagine themselves as giants eating the landscape.

When mom says “Eat your vegetables, they are good for you,” broccoli is there to back her up. Broccoli is very high in vitamin C, vitamin A, potassium and iron. It is also rich in fiber. Recent cancer research has revealed the role of antioxidants in cancer prevention, and broccoli is one of the vegetables rich in antioxidants like betacarotene. When humans breathe, they take in oxygen. The body needs oxygen for normal metabolism to take place. As oxidation takes place in the cells, molecules known as free radicals form.

They can damage tissues in the body. This damage may lead to some cancers, heart disease and other illnesses. Antioxidants apparently slow down the formation of free radicals, reducing and repairing damage to cells. Antioxidants may reduce the risk of heart attack, protect against cataracts, promote healthy eyes and skin, and boost immunity to colds and flu. Recent studies published in the Scientific Journal of Food and Agriculture show that microwaving broccoli reduces its antioxidant properties by 74 to 97 percent.

Broccoli has come into its own in recent years along with other cruciferous vegetables. They have a stronger flavor than some of the old staples like beans, peas, corn, beets and carrots, but if they are grown in the right climate and handled well, their flavor is pretty appealing. That’s a good thing, too.

While it wasn’t much in demand in the United States until recent years, it did appear on dinner plates in the Roman Empire.

The Etruscans in Asia Minor (now Turkey) are the first to have recorded eating broccoli. These people migrated to Italy, taking the vegetable with them. The Romans quickly adopted the vegetable but its original color is now considered “designer” broccoli. In recent years, designer broccoli, which is purple, has appeared on dinner tables. To us it is a novelty but the Romans enjoyed the original broccoli, which was purple when raw and green when cooked. The Romans developed a green variety called Calabrese.

Since many new vegetables are named for their appearance, it is fitting that the name broccoli came from the Latin brachium, which means “strong arm or branch” referring to its branching habit. Roman farmers called broccoli “the five green fingers of Jupiter.”

Italy was the primary place of cultivation until the 16th Century when Catherine de Medici, member of an influential Italian family, married Henry II of France and brought her taste for broccoli with her. French gardeners quickly adopted the plant and its use spread across Europe. The English called it sprout cauliflower or Italian asparagus under the assumption that it originated in Italy.

In America, Thomas Jefferson was way ahead of his time when it came to vegetables. He loved vegetables, salads and variety. From the meticulous garden records he kept we know that he planted broccoli and cauliflower on May 27, 1767 at his home in Monticello, Va.

Although broccoli came to the United States in the 1700s, Americans did not adopt it into their eating habits until the 1930s after the Italian D’arrigo brothers came to America, started growing it in San Jose, Calif., and shipped it across the country. It was not a quick success, however. Some people embraced it enthusiastically thinking it was a newly developed plant, but others heartily avoided it.

Perhaps the problem is that it is often overcooked and becomes mushy. Steamed or stir-fried, it keeps its crispness and has a sweeter flavor. Broccoli lends itself to many cooking methods such as boiling, steaming, deep-frying, pressure-cooking and microwave cooking. It is available year round, but is at its peak in the fall and spring.

Oven Prepared Broccoli You can prepare frozen blocks of broccoli or cauliflower along with an oven meal. Place block in a greased casserole dish. Top with a tablespoon or two of butter or margarine, salt and pepper to taste and cover tightly. Bake for 55 minutes at 325 degrees or 45 minutes at 350 degrees. Stir vegetables 15 minutes before cooking time is up and again just before serving.

1/2 pound bacon, cooked and crumbled (can use low fat bacon)

Mix together the mayonnaise, vinegar and sugar. Just before serving, toss the dressing with the remainder of the ingredients except the cheese. Sprinkle shredded cheese over the top before serving.

1 can cream of mushroom soup

Preheat oven to 425 degrees. Cut the broccoli florets into bite size pieces. Cut the stalk into 1/8-inch thick, round slices.

Place the broccoli into a mixing bowl and toss with a mixture of the olive oil, garlic, salt and pepper and set aside. Spread the breadcrumbs into a 9- x 13- inch metal cake pan and place into the heating oven for two minutes or until lightly toasted.