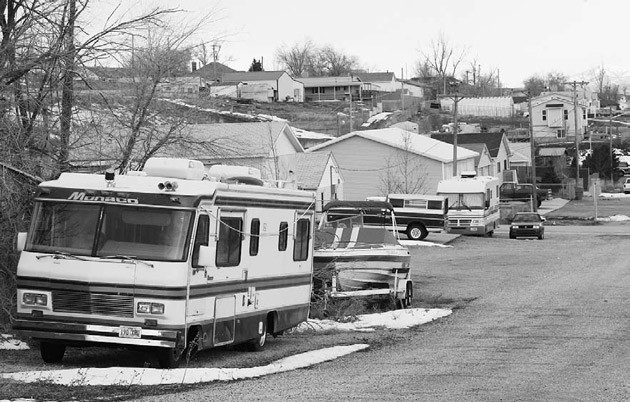 If a sewer project were to move forward, this section of Stockton (Sheridan Street) would be included. At present the project has been haulted by the town council. photography-Troy Boman

It’s been weeks since the Stockton Town Council chose not to move forward with a proposed sewer system, but contention over the matter still divides the town.

The Tooele Transcript- Bulletin has received numerous phone calls, faxes, e-mails and various other communications concerning the matter — and just like every situation there is more than one side to the story.

Some town residents have accused town council member Dan Rydalch of voting against the sewer system due to a personal conflict of interest.

Rydalch currently leases some 300-plus acres of the town’s land each month for cattle and horse grazing purposes as well as for growing crops. This same segment of property is where engineers have planned for holding ponds to be installed for the sewer project. Thus, some are saying Rydalch is opposed to the sewer because he does not want to lose that property.

However, Rydalch said, “If they think that, they are just trying to get [the sewer] in for personal gain.”

“I have lived here my whole life and I would never stop any type of progress,” said Rydalch noting that the land he presently uses would be a good place for the ponds and that he could farm to the south of where he currently does.

But one letter to the town, written by a “group of concerned Stockton citizens” notes, “Even if the sewer project was not an issue it’s our opinion no elected official should be running a business on town property especially if there is no contract.”

Rydalch has a contract for grazing purposes, but although he says he has pushed for a contract for his farming operations, there has never been one drawn up. He has used the land for grazing for eight years and has farmed it for the past three.

“I would love to see [the sewer] go in but I don’t see how we could financially afford it at this point,” he said.

When bids for the project first came in, the totals were 40 percent higher than what was anticipated, which Rydalch says “throws the whole project off” and puts the price “way up over what I think we can afford.”

He said the town council needs to “sit down and asses the project without engineers dictating or the state dictating what we should do.”

Thus, Rydalch and fellow council member Nando Meli have called for a special work session to take place Tuesday at 7 p.m. in the Stockton Town Hall with the two other council members Dan Grogan and Mary Edwards. No public comment will be taken at the meeting.

Another claim being made is that Mayor Barry Thomas wants the project to move forward for personal gain. Some complain that Thomas had a duplex built on a lot that did not meet county requirements and that he needs the sewer to set things right.

But Thomas said, “We followed all the rules and regulations,” noting that proper inspections were done by the county board of health. “We had to meet the same criteria as anybody else. It’s very frustrating to me that they would say this and I don’t see why they would.”

Thomas was also criticized by some in opposition to the project for not seeking public opinion when the project first got under way. To this allegation he said, “I followed the state recommendations all the way down the line” because the state was footing the bill.

The mayor simply hopes the “town pulls together in the final decision and makes the best of it.”

Yet another allegation being made is that because Ed Macauley of the Division of Water Quality once worked for Ward Engineering there may be some existing conflicts. (Ward is the company that has been designing the project from the get-go.)

The Tooele-Transcript Bulletin was unable to contact Macauley concerning the matter, but Ward Engineering said it was “several years ago” that he worked for them.

Due to his dissatisfaction with the current council’s vote, former town councilman Robert LaRue created an initiative petition which calls for the council to move the project forward. If the council chooses to hold fast to their no-go decision the petition requests that the legal voters of Stockton vote on the matter in a special election. It also requests that no further action be taken by the council other than to extend deadlines with the water board until the votes are tallied.

In order for the petition to move ahead, at least 25 percent of those registered to vote must sign it. This means that about 100 people must sign LaRue’s document.

He said four petition packets have been distributed throughout the town and while he doesn’t know the total amount of signatures yet received, he does know that one of the packets has already received 20 signatures.

Included with the packet was a letter written by LaRue which outlines what he feels are the main points of interest about the project.

One such point was “… Stockton’s proposal for a sewer project is ranked number 12 with the state Water Quality Board out of 250 plus other communities that are vying for a limited amount of funding.”

He backs up this statement with a copy of an e-mail from Macauley which states, “Stockton is currently ranked [number] 12 on the state’s project priority list for funding.”

He also included a letter of support for the project from Jeff Coombs, Environmental Health Director of the Tooele County Health Department.

LaRue said he isn’t trying to cause problems but to just “move forward the project.”

What about the numbers?

Originally the approximate $3 million project was going to be paid for with a $950,000 grant from the state as well as a $1.8 million loan and a $200,000 contribution from the town. But since the project was first conceived, the costs have soared up to $5.1 million dollars.

If the money from the state and the town were added together and subtracted from the new total, a balance of $2.15 million would still remain.

An approved Community Development Block Grant for low income families would knock off some of the cost (about $200,000) but the state’s total contribution in the form of a grant/loan contribution would need to total $4.7 million dollars for the project to continue as planned. This would mean that the state would be covering the cost of 92 percent of the project.

In the past the state Water Quality Board has never given a project a loan for half the cost and a grant for the other half, according to councilman Meli. While he is in favor of having a sewer system, he doesn’t think the current plan is feasible.

Thomas is just hoping for the best and would like the Division of Water Quality to make a presentation to the Water Quality Board.

Tonight the board will likely decide on how to pay back the nearly $300,000 already owed for preliminary work on the project.

Even though an official vote to kill the project and pay off the debt incurred has been made, an official letter to the Division of Water Quality has yet to be drafted.

Councilman Meli said Mayor Thomas simply refuses to write it, but Thomas says it is up to the council to write the letter. Either way, the state remains on hold as well as the project