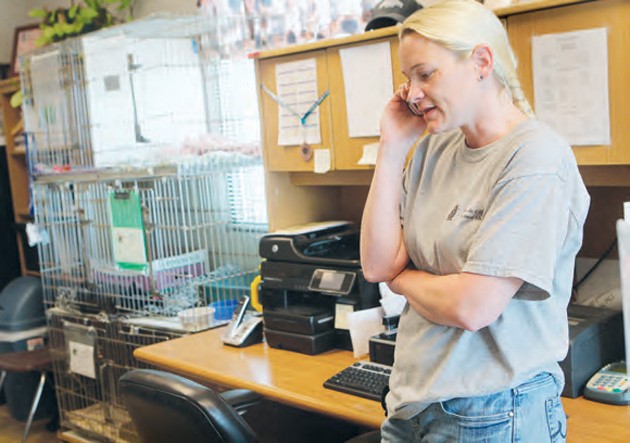 Tooele City Animal Shelter Supervisor Tawney Dewsnup talks on the phone Monday afternoon in the office area, where a tower of cages has been moved for cats with newborn kittens so shelter workers can keep a closer eye on the young cats.

Local shelters already struggled to keep up with crowding before a new law passed last summer requiring all public animal shelters in the state to house strays for a minimum of five business days before the animals can either be put down or put up for adoption. Now, the situation has only become more difficult, according to Tooele City Animal Shelter Supervisor Tawny Dewsnup.

“We’re stretched to the limit,” Dewsnup said. “Even before the new law, we were running at capacity all the time.”

As it stands, the Tooele City shelter can house 24 dogs and 30 cats at a time — and it currently admits an average of 1,500 animals per year, at a rate of 25 to 30 new arrivals per week. Because the shelter is closed on weekends, each new animal remains at the shelter for seven days while it waits for an owner to claim it, and only then can it be considered for adoption, or euthanized.

Being a public shelter, the Tooele City facility cannot turn animals away when it runs out of space. Instead, shelter staff must make room for the additional animals by either shipping adoptable animals to other animal rescues, or by euthanizing animals that have been at the shelter for more than five business days.

Animal rescues far and wide have stepped up to help alleviate the situation, and many of Tooele City’s adoptable strays are shipped to foster homes, other Utah shelters or to rescue groups in Idaho, Wyoming or Montana. Volunteer efforts have kept euthanasia rates from rising, but Dewsnup said she would still like to see more animals find homes. “We definitely euthanize more than we would like,” Dewsnup said, “but without more space, there is no way we can [decrease euthanasia rates].” Because Tooele City isn’t alone in needing a new facility, Dewnsup said, she is considering the possibility of creating a much larger shelter that could serve all three areas — Tooele City, Tooele County and Grantsville. A volunteer is currently looking for a grant that might cover at least part of the costs, Dewsnup added. The Tooele City shelter isn’t the only facility struggling to keep up with the new law. Grantsville’s shelter, which has room for 18 cats and a maximum of 16 dogs — with the eight available kennels divided in half, is also stretched thin.

“Our shelter is very small,” Grantsville animal control officer Randi Johnson said. “The new law has been tough for us.” Adoption rates at the Grantsville shelter are also low, and Johnson said she relies heavily on rescue groups to avoid putting down adoptable animals. She believes a combined shelter would give local animals a better chance at being adopted.

However, not everyone in the county animal control industry is on board with the idea. Joe Roundy, a veterinarian with the Tooele Veterinary Clinic and who runs the county animal shelter out of his office, said he believes a larger, combined shelter would not be cost effective. “It’s much more efficient to contract it out,” Roundy said, adding that the county currently pays him about $8,000 a year as a contractor. “You can’t pay someone to feed the dogs for that much.”

It would be more efficient, Roundy continued, to expand the current Tooele City shelter to make room for more animals, or to reduce the amount of time animals waiting for adoptions are kept in the facility.

“Yeah, you don’t want to see [the surplus animals] euthanized, but on the other hand, I see all these animals that are unadoptable,” Roundy said. “I’m not an advocate of just killing animals, but sometimes that’s the only option.” Building a valleywide shelter that would serve multiple communities is not a new idea. It was proposed by then-Tooele City shelter supervisor Debra Bush two years ago. Since then, the topic of a combined shelter has come up in political conversations, but no specific plan has been set into action.

“We did talk to the mayor of Grantsville, but it was just talk,” Tooele County Commissioner Jerry Hurst said. “It wasn’t really going anywhere.”

There is room in the new jail that could be used to expand the county animal shelter, Hurst added, but for now, expanding or combining local animal shelters isn’t something county government is looking in to.