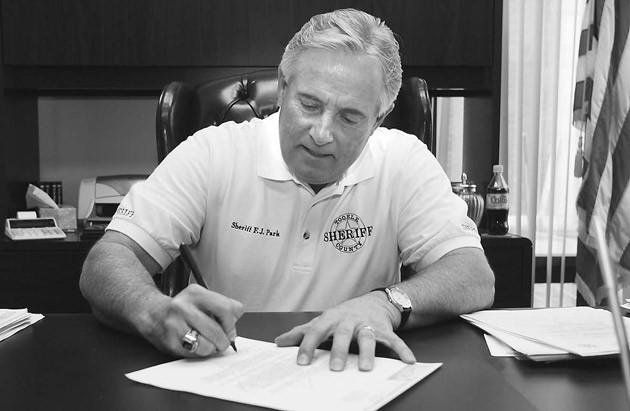 Tooele County Sheriff Frank Park signed a proclamation Wednesday designating the start of the area’s “A Child is Missing” program. When a child or elderly person is lost or abducted in the Tooele County area, law enforcement officials can now call 1,000 houses or businesses within that area, giving them information and asking for assistance in locating the person. photography/Troy Boman

Approximately 850,000 children are missing in the United States on a daily basis. While some of those children are runaways, others are abducted — or in the case of very young children, they may simply wander away from home and become lost.

Sheriff Frank Park announced Wednesday afternoon that a new program called “A Child is Missing” (ACIM) is now ready to be implemented in Tooele County.

The program has the capacity to allow law enforcement officials as well, as 1,000 residents within the immediate area, know immediately when there is a missing child or elderly individual who might have Alzheimer’s disease or other forms of dementia. With the help of modern-day technology, the sheriff can push a computer button when a child is missing and 1,000 households and businesses will all receive a call within 60 seconds announcing that information. The call will start out: “This is the Tooele County Sheriff’s office calling and we have a child missing near your area.”

The tape recorded phone call will go on to state the description of the child or elderly person, what he or she was wearing when last seen, where the person was last seen and any other information that would help locate the individual.

The 1,000 households or businesses called are asked to be on the lookout and to even go outside and help search for the missing person if they are able to do so.

Park said Tooele County phone numbers in the telephone book have already been programmed into a computer.

“If you are a business owner or individual who has your phone number listed in the telephone directory, your name and number is in our ACIM data base,” Park said. “We have all areas of Tooele County listed on a map. Anytime we get a report of a missing child or elderly person, we go to our map and activate 1,000 calls to people in that area.”

Of course before a call is activated, law enforcement officials must be called to the scene a missing person. If officers are unable to locate the missing person within 10 minutes or less, they will activate ACIM phone calls.

Park is excited about the new technology to help find missing children and others.

“The first two to three hours are critical when a person is missing,” Park said. “Chances that the person will be found alive diminish somewhat after that period of time.”

Park said anyone who has an unlisted phone number can participate in the ACIM program by going online to: www.achildismissing. org.

Click onto the “How to Join” box at the top and your telephone number will be added to the list. All phone numbers in the data base are confidential and will never be given out or sold to anyone, Park stated.

While the ACIM program is new to Utah, it has been used in other states for at least a year. Since its inception in Georgia in February 2004, more than 23,000 calls have been placed. The average recovery time for a missing person after those calls were activated was 90 minutes, according to the sheriff of Hall County, Ga.

A police chief in Elkheart, In. called the ACIS program, “A great tool we can use to … assist us in locating the most vulnerable people in our community, young people and the elderly.”

Sheriff Park and other Tooele County law enforcement agencies are certain the ACIM program will be useful in this area.

It has been reported nationwide that when individuals and businesses receive a ACIM report, approximately 90 percent of the listeners participate in looking for the missing person.