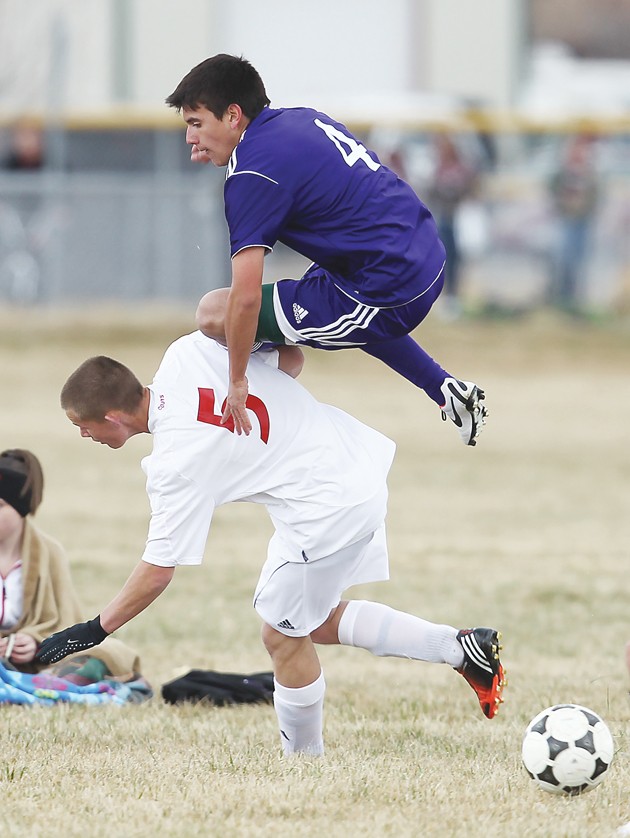 No one-man disadvantage could hold back the Tooele Buffaloes on Friday, as they squeaked out a goal in the final minutes to defeat the Grantsville Cowboys 1-0.

Jordan Shields kicked home the goal with time winding down in regulation, and the Buffaloes picked up their first region win of the season.

Shields scored the game-winning goal after breaking through the Cowboys’ defenders, and instead of passing it off to his teammates coming from the outside, he decided to take the shot himself.

“We had a great development for the play,” Shields said. “We had a few of my outside people coming in, and I didn’t have time to pass it to them. I drove through a couple of defenders, thought about it, faked it to them, and turned around and shot. I’m kind of lucky it went through a deflection and got the goal.”

Shields stayed kneeling and the grass after the goal was scored, soaking in what had just happened.

“I was just speechless,” he said. “Last minute goal, it feels great.”

Tooele’s Isael Lomeli received a red card about halfway through the second half after he knocked down Grantsville’s Wesley Allen. With that red card, Tooele played one man short for the remainder of the game.

“It really brings you down,” Shields said. “To still come out with a win feels great. It’s such a confidence booster. Hopefully we can come out with another win next week.”

Grantsville had its chances to score, especially after the red card. No chance was better than the shot opportunity by Benton Tripp off a deflection. The ball bounced back to him, and THS goalkeeper Matthew Lozano was left vulnerable on the grass. However, Tripp kicked the ball right back into the chest of Lozano. These kinds of chances frustrated Grantsville coach Travis Lowry, and he said they have to start putting the ball in the net.

“We need to take more of them,” Lowry said. “We should’ve played the odds a little more. Tooele did good. They did what they needed to do to win.”

Lowry liked the pacing of Friday’s game and felt like his players were in control.

“We played really well,” he said. “We controlled the game. We should’ve had a couple in the first half, and in the second half we weren’t as aggressive. I was pleased with the way we played just not the outcome.”

Instead of shrinking back and defending after the red card, Tooele kept up the aggressive tempo to get its goal. Tooele had three other opportunities to score before Shields’ eventual game-winning goal.

Immediately after the card, Nathan Fisk crossed a pass to try and set up a goal that was caught and cleared away. Austin Gonzalez passed a ball just a little too long, as it was scooped up before Shields could blast it in. Fisk then put a ball through the legs of Allen, but then his shot missed left.

Tooele lost to Ogden 8-0 and fell to 1-3 in the region with that loss. Grantsville hung tight against Ben Lomond but eventually lost 3-1. The Cowboys are now 0-4 in Region 11.