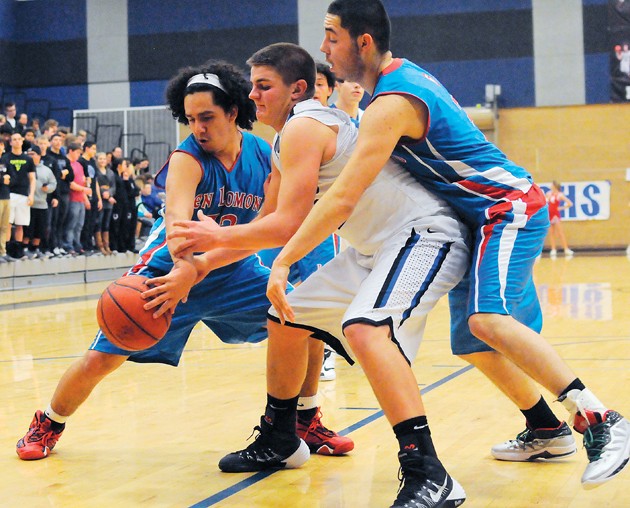 Gage Manzione battles for the ball with a pair of Ben Lomond players Wednesday night. The Stallions dropped the region game to the Scots.

The race for the final state tournament spots in Region 11 just got a whole lot more interesting.

Ben Lomond used a run in the second quarter down 19-10 to push its way back into the contest. Stansbury’s nine-point lead evaporated, and the Scots cut the lead to one point at 26-25. Gage Manzione scored 12 of his team-high 17 points during the first half to give Stansbury a halftime lead.

However, the Scots carried the momentum of their late push in the first half to take the lead during the third quarter. Shane Andrus found Justin May for the first points of the quarter to extend Stansbury’s lead to 28-25, but the Scots came down and hit a 3-pointer to tie the game. They then got a stop, and came down to score a 3-pointer again to snatch the lead away from Stansbury at 31-28. They never looked back from that point.

Tyler Jensen hit a 3-pointer with Stansbury down five to cut the lead to two at 36-34, but the Scots got one more basket before the end of the quarter for a four-point lead. Ben Lomond then opened the fourth quarter with a bucket, and then it forced a Stansbury turnover. That turnover eventually turned into points on a jump shot to make the score 42-34 in favor of the Scots, who iced the game away for the remainder of the fourth quarter.

Stansbury, Ben Lomond and Tooele are now all tied for third place in Region 11 at 1-3 behind Grantsville (3-1) and Bear River (4-0). Stansbury defeated Tooele, Ben Lomond defeated Stansbury, and Tooele defeated Ben Lomond in the first round robin of the region schedule.

Stansbury gets a chance to play a tune-up game at home against Juan Diego on Friday at 7 p.m. after suffering a three-game losing streak in the region. It then returns to the region schedule Wednesday when it hosts Tooele, which hosts Ben Lomond on Friday.