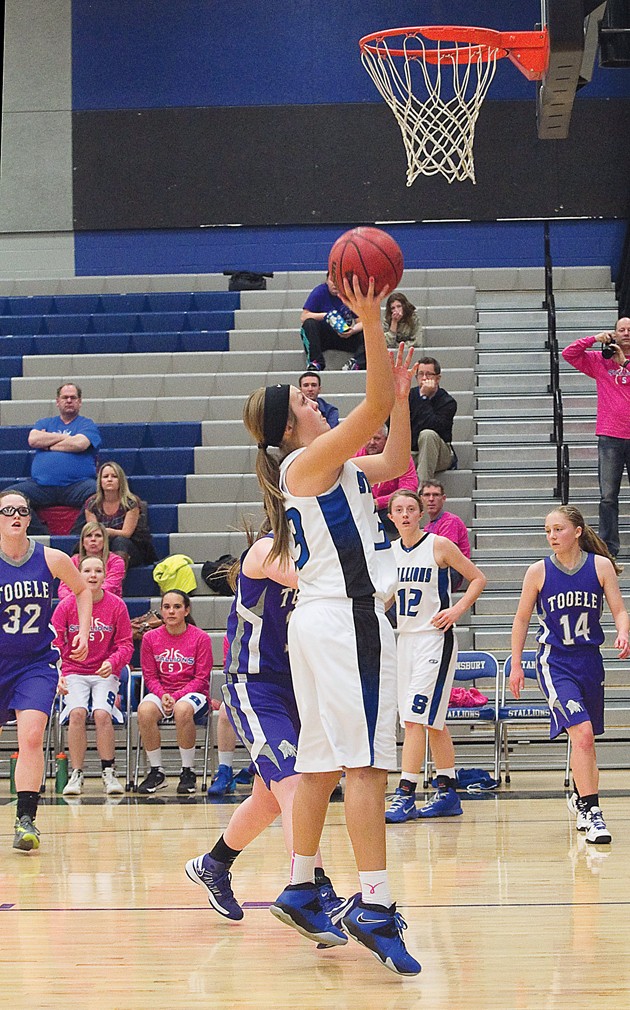 Stansbury’s Kallie Stewart was instrumental in the team’s comeback against Tooele. Stansbury swept the Lady Buffs in region games this year with Tuesday’s 54-46 win.

Stansbury needed someone to step up and be the hero against Tooele — it got two.

With the Tooele Lady Buffaloes (2-4 in Region 11) leading the Stansbury Stallions (6-0 in Region 11) 35-25 after a bucket by Tooele’s Hannah Webber, Stansbury turned to junior Kallie Stewart and senior Madie Alvey to bring it back. Those two combined for a 10-0 run to tie the game back at 35, which was then capped by a 3-pointer from Erika Lakin to give Stansbury the lead.

The run created just the momentum Stansbury needed to defeat Tooele 54-46 and move to just one win away from winning the region championship.

“I’m proud of them that they just didn’t give up,” said SHS coach Kenzie Newton. “We got down 10 in that third quarter and they just kept fighting.”

Tooele clicked as well as could be hoped for the first three quarters as Webber and Courtney Schiwal combined for 27 of Tooele’s 46 points. The Lady Buffs wanted to pull the upset, and they gave Stansbury everything it could handle.

“We’re competing with the two top teams in the region, which we didn’t do the first time around,” said THS coach Kris Ashby. “These teams beat us by more than 20 the first time, and I think that’s the biggest thing is we’re a different team if we can stay healthy.”

Newton said she was impressed with Tooele’s mid-season turnaround and how well they competed in this game.

Tooele built its third-quarter lead on the strength of Aubrey Vanderwerken, Webber and Schiwal right out of the gates of halftime. Stansbury’s Alvey opened the half with a steal on the opening possession that she brought back for a layup to make the score 22-20 in favor of Tooele. But Schiwal responded with a 3-pointer to get it up to 25-20. Following shots by Stansbury’s Bailey Wilson, Tooele’s Webber and Stansbury’s Lakin, Vanderwerken knocked down a jump shot to make it 29-24. Tooele then got a stop, and Schiwal hit a shot for a seven-point lead. Wilson hit a free throw, and then Vanderwerken dished the ball inside to Webber and two straight scoring possessions to give Tooele a 35-25 lead.

Alvey and Stewart then took over for Stansbury. Wilson inbounded from the side with a lob to Stewart in the paint, which she put in for 35-27. Alvey then picked up a steal and was fouled on a layup that went in. She hit the free throw to make the score 35-30. Stewart then had a contested hook shot that she put in.

“[Kallie Stewart] hit some big shots for us and demanded the ball inside,” Newton said. “I just keep telling her, ‘If you get the ball in there, you’re unstoppable.’ Finally, she’s wanting it and feeling confident. You could see it tonight that she was wanting take over the game, and we needed that inside presence. It really helped us.”

With Stansbury trailing 35-32, Alvey got one of her patented transition steals, but she missed the fastbreak layup. Tooele got the ball back, but Alvey was right there again, as she picked up another transition steal, giving Stansbury another offensive possession. That possession ended with the ball in Alvey’s hands behind the 3-point line. She released the ball toward the hoop and knocked down the shot to tie the game at 35.

Stansbury ended the third quarter with the lead 40-39, and it carried over to the fourth to pull away for the win. For Stansbury, it’s now just one win away from the region championship, which it can clinch Thursday against Bear River. The win would also give the Stallions the No. 1 seed from the region going into the state tournament. If Stansbury loses to Bear River, it can still win both the region championship and No. 1 seed, but it would no longer control its own destiny.

“It’s going to be a battle up there — very similar to tonight, not a lot of fouls called when we’re penetrating, so we need to finish,” she said. “The girls are excited, and I think (they will have) a little bit of adrenaline (from) tonight. That’s how these big games are — the more we can have of those, the better prepared we will be to go to state.”

The loss for Tooele simply delayed what it can possibly do Thursday: clinch a spot at state.

“The only thing this loss did to us was make Thursday’s game important,” Ashby said. “It made it a must-win for us. We want that third place spot. With the losses to Bear River and Stansbury the first time, we knew coming in that this was just for pride.”