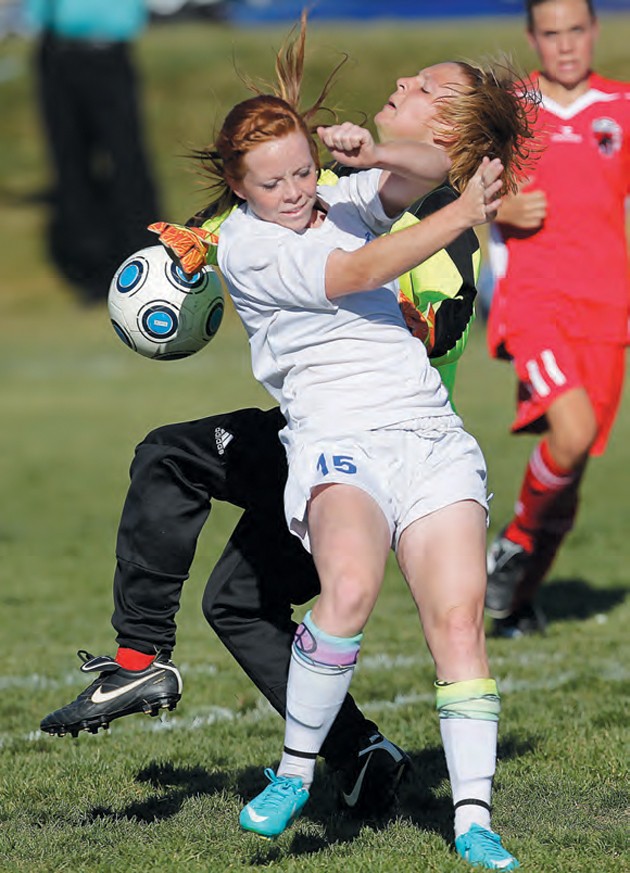 The Grantsville girls soccer team wanted to load the box and hang on for as long as it could against the Stansbury offense on Tuesday, but the strategy proved futile with the Stallions defeating the Cowboys 8-0.

The Cowboys stayed the course for the majority of the first half. Goalkeeper Ivy Montgomery pulled in several saves in the first half to stymie the Stallions’ offensive players. Even in situations where Montgomery was out of position, a Cowboy defender would be right there to save the day.

“That was our gameplan with so many players hurt,” Grantsville coach Travis Lowry said. “We just kind of had to pack in the defense a little bit. That was our focus, just try to stop them as long as we could.”

Stansbury coach Jeremy Alverson said he was impressed with Grantsville’s early strategy and how the Grantsville players were always in the right position to stop the ball.

“Their positioning was very well,” Alverson said. “We took like 20 shots right off the bat, and [Montgomery] was up to the task. Kudos to her for having all that pressure on her.”

Stallions’ midfielder Michaela Didericksen had two shots in the first half that were the best opportunities for Stansbury to break through the Grantsville defense. Didericksen shot one off the top post during the first five minutes of the game, and then another one of her shots deflected off Montgomery, but then the Grantsville defenders cleared the loose ball out of the goal box.

Finally, Stansbury broke through when midfielder Cierra Golden found the net. Golden had two shots sail over the goal, including one that sailed into the church parking lot, but Golden channeled that power into a kick that deflected off Montgomery’s hands and into the net for a 1-0 lead for Stansbury.

That’s when the flood gates opened.

Didericksen scored a short time later, but the ball was initially saved by Montgomery. However, Montgomery was off balance, and she fell past the goal line, giving the Stallions a 2-0 lead.

Didericksen’s second goal of the game was off another Montgomery deflection, putting Stansbury up 3-0. For the Stallions fourth goal midfielder Rachel Prescott crossed a pass to forward Bret Wilkinson, who put a foot on the ball to softly guide it into the right side of the net.

All these goals were scored in about a 10-minute span to end the first half.

Grantsville started the second half the same way it started the game in order to suffocate Stansbury’s offense. Stansbury forward Rachel Luker attacked quickly to counter Grantsville’s strategy. She got in close and knocked in the close-range goal to give Stansbury a 5-0 lead. Granstville kept with the defensive strategy, never mustering any kind of offensive attack the whole game, and things worked for a good chunk of the second half. However, Stansbury’s Chelsie Pritzkau knocked in a goal over a diving Montgomery.

That goal opened another flood gate for Stansbury.

Golden crossed a long pass to midfielder Erin Jones from the right side, and Jones knocked it in for a 7-0 lead. The final goal came from forward Katrina Wilkins, and that score ended the game with the mercy rule.

Stansbury (7-8, 4-7 in Region 11) clinched the fifth and final playoff spot in the region by owning the tiebreaker over Tooele. Stansbury defeated Tooele both times the two teams faced each other during the season. Stansbury wraps up the season against Ben Lomond, a team also headed to the playoffs. Although the game doesn’t technically mean anything, the game gives both teams a chance to face a playoff opponent in preparation for the playoffs.

For Lowry and the Grantsville players it’s all about taking the positives from this game and applying them to their final two games to finish the season strong, Lowry said.

“We’ve come a long way, but we’ve got to get the combinations together,” Lowry said. “We’re still having trouble developing possession of the ball.”

Lowry said his girls don’t have much confidence with the ball yet, and that’s something that still needs to be worked on. Grantsville is trying to keep the atmosphere fun in order to keep up motivation.