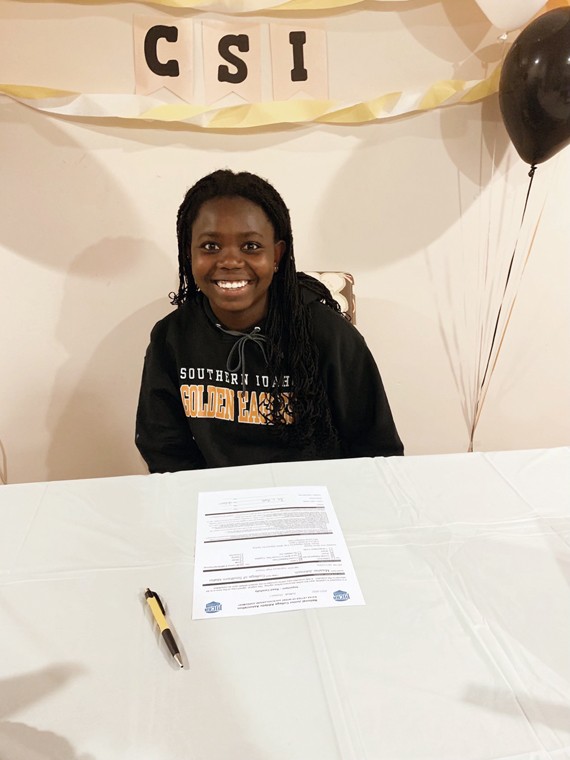 Stallions’ leadoff hitter excited for next step in softball career ♦

Stansbury senior Maame Johnson has been a force for the Stallions’ softball team since the first time she suited up for the varsity squad as a freshman, and she’s off to a strong start again this season.

Thus, it is no surprise that after she graduates this spring, she will be taking her considerable talents to the next level. Johnson recently signed a national Letter-of-Intent to play softball at the College of Southern Idaho in Twin Falls, Idaho, where she found what she feels is a perfect fit for her both academically and athletically.

“I went for a camp a few years ago and I really liked it,” Johnson said. “I’ve just been thinking about it, and then I went up for my visit and that’s when I decided. Everything fit well — the town and the team, and I meshed really well with the girls, so I decided that’s where I should be.”

“She’s our leadoff hitter, and usually when she does well, we do well,” Stansbury coach Bridget Clinton said. “She’s a good table-setter. If Maame can get on, (No. 2 hitter) Payten (Staley) can score her.”

It isn’t just Johnson’s prowess at the plate that makes her so dangerous for the Stallions. Her speed makes her a force on the basepaths, as she has racked up 41 career stolen bases in addition to her 53 extra-base hits. It also gives her incredible range in the outfield, as the center fielder has recorded 64 put-outs and four outfield assists in her career.

“She brings a lot of energy,” Clinton said. “She’s really aggressive and she’s a great outfielder. She tracks the ball really well.”

Johnson said the loss of her junior season, as well as the COVID-19 restrictions that followed, made for a challenging recruiting process.

“Coaches couldn’t come out to games as much as they used to, so it was a lot more virtual,” she said. “It was really important that the year before, I had contact with these coaches, so they already knew who I am, so they didn’t have to watch me as much.”

Johnson, who plans to study nursing at CSI, said her time at Stansbury has had a major impact on shaping her into the player she has become.

“You’re always put in different situations, and you learn something new every day in high school and in club (softball),” she said.

CSI competes in the Scenic West Athletic Conference, alongside schools such as Snow College, Utah State University Eastern and Salt Lake Community College, in the National Junior College Athletic Association. The Golden Eagles are currently 20-12 overall and 11-5 in SWAC play.