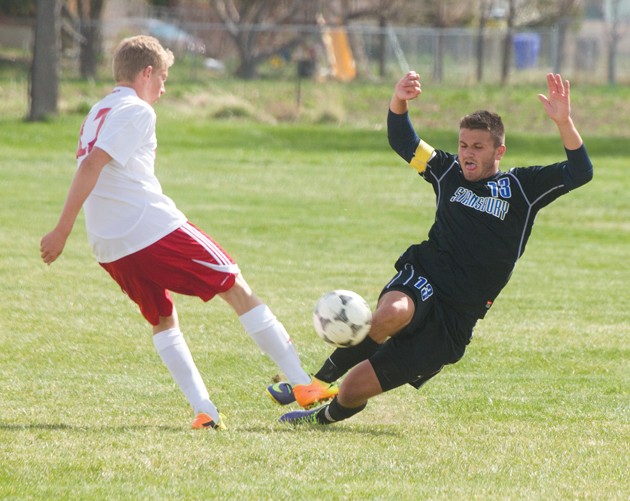 The Stansbury Stallions officially won the region championship with their 5-1 soccer win against the Grantsville Cowboys, but they’re not even paying attention to that.

With a 6-0 record in region, Stansbury is guaranteed at least a share of the Region 11 championship, but it still needs to win one of its next two games to guarantee itself the No. 1 seed going into the state tournament.

“As of right now, we just don’t consider anything like that,” said SHS coach Brandon Andersen. “We want to stay focused. We have another game on Friday against Bear River. … Right now [the region championship] is not my focus. My focus is to win the next game.”

Andersen said he knew Grantsville wanted to come out and tighten up on the defense, so the Stallions adjusted the game plan to score from areas other than up close.

The first goal of Stansbury’s four-goal victory came with the forwards finding each other with passes. Ian Thompson came down the right side of the field with the ball and crossed it to Tarl Lewis at the striker position. Lewis blasted the ball to the net for the goal and a 1-0 lead.

Thompson then got fancy with his footwork, dribbling the ball between his feet. Then, from about 25 yards out, he zipped the ball with a kick that landed safely in the net for a 2-0 lead.

Lewis then scored his second goal of the game when the ball came loose down in the goal box. Lewis tapped it in for the goal to give Stansbury a 3-0 lead.

The first half blowout continued with Nathan Johansen dribbling in and to the right. He then crossed his shot back to the left to score the goal, giving the Stallions a 4-0 lead.

Grantsville started to get things going in the second half on offense, but it was too little too late. The first offensive chance the Cowboys had was on a 40-yard kick by Matt Whitting into the wind. Whitting blasted a long shot that powered its way through the wind and clanked against the left goal post.

However, the Cowboys started to take more chances. On a collision in the goal box, Stansbury’s Josh Gallegos was called for a foul that set up a penalty kick for the Cowboys. Benton Tripp attempted the PK and knocked it safely into the net to give Grantsville its only goal.

But Stansbury didn’t stand for that for long. Junior Calderon dribbled the ball toward the left and attempted an angled shot at Grantsville’s goal. He angled the ball just right as he scored and gave Stansbury the decisive 5-1 lead.

Andersen said the last game against Grantsville at Stansbury High School was a struggle on the offensive side, and he wanted that to change on Grantsville’s field.

“We mixed up our formation a little bit just to throw a little extra flavor in there to have some postseason options,” he said. “Mainly [the game plan] was to just keep the game simple. We knew [the Cowboys] were going to compact on the defense to try and prevent us from shooting, so we modified our formations just a little bit to try and counteract what was on their defense to stop them from preventing us from having shots and see if we could get shots on frame earlier.”

Stansbury’s final two games are in the region against Bear River on Friday and at home against Tooele on Tuesday.

Grantsville plays a non-region game at North Sanpete today, and then it plays its final two region games during the next two weeks. It hosts Bear River on Friday, April 25, and then it visits Ben Lomond on Monday, April 28.