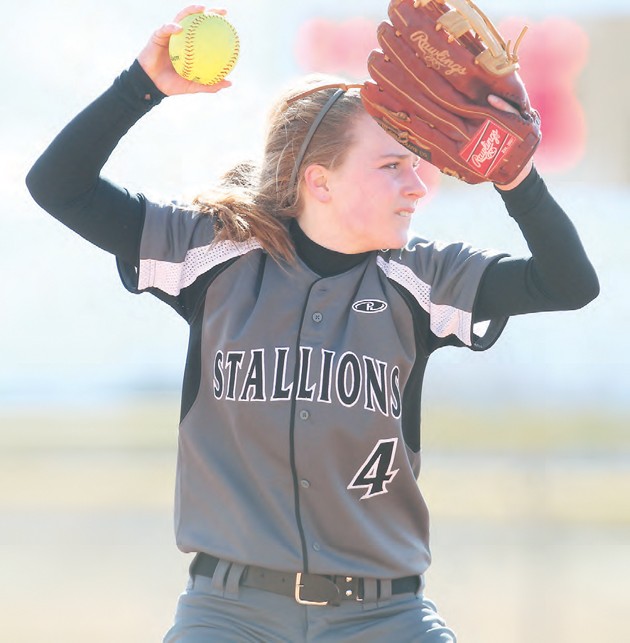 Stansbury High School’s Beth Chipman throws the ball to first against Copper Hills on March 11. Chipman is the top pitcher for the Stallions so far this season.

Stansbury continued its hot start to the season by winning four out of five games while playing in St. George at the SUNROC Invitational.

Although rocked by Riverton in the first game of the invitational, Stansbury’s pitching stepped up to deliver four wins, with two of those wins being shutouts.

Riverton scored eight runs in the first inning against Stansbury Friday, and there just wasn’t enough fire power to keep up. The Stallions chipped away at the lead but still fell short 12-7.

“Beth pitched that game, and she usually pitches well,” Stansbury coach Bridget Clinton said. “She just had a bad inning. We came back and hit the ball and made it a closer game. Riverton is one of the toughest teams in the state. We gave them a game at least.”

Clinton said sometimes losing those kinds of games, especially early in the season, isn’t necessarily a bad thing. She said the team can learn from that, and that’s exactly what it did by winning the next four games in convincing fashion.

The Stallions bounced back immediately in their next game that day for a 15-0 beatdown of Lone Peak. They finished up that evening with their second shutout of the tournament, which was a 7-0 win against Canyon View.

The game against Alta wasn’t even close from the get-go. Stansbury scored 12 runs en route to a 15-1 win against Alta to wrap up the invitational. Sophomore pitcher Kimbri Herring picked up the win, and freshman Alyssa smacked a home run.

“It’s always good to get outside and see some live pitching,” Clinton said. “Everybody pounded the ball. Our pitching was solid and defense was solid. When you get all three of those things working at the same time it’s a great thing.”

The Stallions open Region 11 play on Wednesday with a home game against Ben Lomond. They follow that up with a rematch against Alta at home on Thursday. Finally, the Stallions head to Garland on Saturday for their second Region 11 game. All three games start at 3:30 p.m.

Clinton said having success against a tough preseason schedule will help the Stallions in region play. She said with a tough region, they’ll need that positive playing experience.

“We have a tough region,” she said. “It’s the toughest region in the entire state in all the classifications. We’re definitely ready for region to start.”