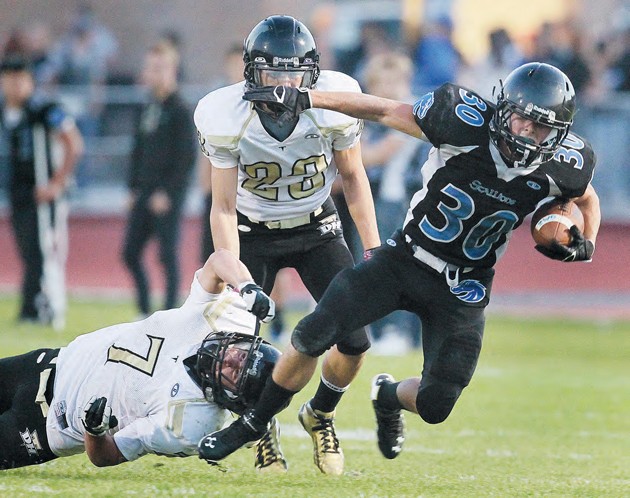 On Friday night the Stansbury Stallions engaged in a heavyweight rematch with the Desert Hills Thunder, the team that knocked the Stallions out of the playoffs last year.

The two teams slugged each other in the jaw all night long as both defenses made few mistakes and gave up fewer yards. In the end the Stallions came out on top with a hard fought 12-7 home victory thanks to their kicking game and a resolute defensive game.

“It was a defensive war on both sides of the field. It was toe-to-toe on defense,” said Stallions coach Clint Christiansen. “It was just a defensive battle, but defense wins championships.”

Trailing 7-6 midway through the third quarter the Stallions received a punt and started their offense with great field position on the Thunder 43-yard line. Stallions quarterback Chase Christiansen ran the ball up the middle for four yards, which was followed by a three-yard gain on the ground by Jesse Horowitz. The next play set the Stallions back as Chase Christiansen was met behind the line of scrimmage for a loss of three-yards.

Facing fourth down with six yards needed for a new set of downs on the Desert Hills 39, the Stallions were in a precarious position. A punt would likely result in a net gain of roughly 20 yards, but the offense was struggling to gain yards against a stout Thunder defense.

The Stallions elected to line up for a punt, but Colton May, who was lined up as a blocker in the backfield, caught the long snap and rushed the fake punt through the right side of the offensive line, catching the Thunder defense off guard and gaining 24 yards to give the Stallions a new set of downs on the 15-yard line.

The trick play changed the momentum of the game as Stansbury finished off the drive with a 10-yard touchdown run by Christiansen that gave the Stallions a 12-7 lead after a failed two-point conversion.

With just under three minutes remaining, the Stallions had the ball and only needed to keep the ball on the ground and move the chains once and the victory would have been wrapped up. Jackson Clausing rushed the ball for a big gain, but as he fought for a few extra yards as multiple Thunder defenders hit the Stallions’ running back, the ball flung into the air and landed in a Desert Hills player’s hand.

With a chance to win the game facing fourth down and inches, Desert Hills quarterback Ty Rutledge rushed for just enough to get a first down with 1:30 left on the clock with the ball on the 43-yard line. Christiansen nearly intercepted a pass on the next play. Then Clausing and Stanley Havili sacked Rutledge on second down. Staley then tackled a Thunder receiver on a screen play after a short gain.

Facing fourth-and-11 Rutledge stepped back to fire a pass but was under duress by a host of Stallion defenders, forcing the Thunder quarterback to make an errant throw defended by Christiansen and Dacota Case that was incomplete with only 29 seconds left, wrapping up the Stallions 12-7 victory on a Thunder turnover on downs.

“Desert Hills is loaded. They’re a championship contender,” Christiansen said.  “They played for (the championship) last year. It meant everything to go toe-to-toe with them. We wanted to see if we could play with a team of that caliber. Tonight we were good enough to win.”

The Stallions struck first on two second-quarter field goals by Darius Johnson. The first was from 43 yards, while the other was good from 36 yards.

“We didn’t want to take a chance and pass up points so any time we can get anywhere close to (Johnson’s) range we’ll kick it and see what happens,” Christiansen said. “Tonight (kicking) won us the game.”

The Thunders’ lone score came on a 36-yard touchdown reception by Brad Wulfenstein on a pass from Rutledge.

May led the defense with 11 tackles while Clausing added nine tackles. On offense the Stallions didn’t throw a pass as each time Christiansen stepped back to throw he was sacked or had to scramble for runs.

Stansbury had seven different players run the ball. Christiansen ran for 56 yards, Case rushed for 42 and May ran for 24 yards. Horowitz rushed for 21 yards, Chandler Staley ran for 20 yards, while Clausing and Zayne Anderson each rushed for 10 yards.