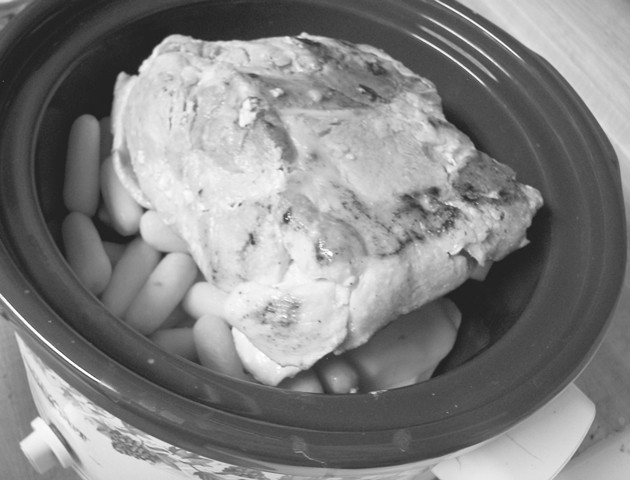 When cooking meat with vegetables, put the vegetables, cut in bite size pieces, on the bottom so they will cook evenly. Meat generally cooks faster than vegetables so it goes on top.

Slow cooking is sometimes considered a winter-time cooking method as we contemplate a hot stew or chowder, but a slow cooker can be an asset for any meal — even in the summer.

It is a good solution for supper after a day of working or playing outdoors or when company is expected. Consider putting it on the night before to simmer your favorite breakfast casserole or hot cereal.

You don’t need a special recipe to use a cooker. Many favorite recipes can be adapted to crock pot cooking. Knowing a few shortcuts and cooking tips will allow you to finish the recipe on time for dinner and it will include that rich, simmered flavor.

If your morning schedule doesn’t allow you enough time to prepare all the ingredients for a luscious dish you’d like to serve that evening, do most of the work the night before. Chop up vegetables and tuck them in separate containers and refrigerate overnight. Potatoes may be submerged in water overnight so they don’t turn brown. Cut up meat chunks. Brown ground meat completely, but do not brown chunks or large pieces of meat since browning doesn’t cook the meat completely. Browning the outside warms up the inside and encourages microbial growth.

If your recipe includes dry beans, some prior preparation is in order. Beans will not generally be cooked in the time allowed for the other ingredients and just soaking overnight is not sufficient to bring them along. For most recipes, boil the beans for about 10 minutes. Then drain and add to the cooker. If the recipe calls for sugar or acidic ingredients, cook beans completely before adding them to the selected dish. Boil the beans for 10 minutes and then simmer for one to one and a half hours before adding.

Start with a recipe that calls for less tender cuts of meat.

Find a similar recipe you know you can depend on and use it for a guideline for the adapted dish. Pay attention to amounts of liquid, quantities and sizes of pieces and cooking times.

Reduce the liquids you would otherwise use in recipes to one half, unless the dish includes rice or macaroni.  You can substitute one liquid in equal quantities to replace another.

If you find that the dish you are preparing has too much water, set the control to high for about 45 minutes. Most recipes cooked on low will be juicier since the low heat does not boil away liquids. The more fat a piece of meat has the less liquid you will need to cook it.

Rice, noodles, macaroni, sea food, Chinese vegetables and milk do not hold up well when cooked eight to 10 hours. Add these to the sauce or liquid about two hours before serving if cooked on low and one hour if cooked on high.

Cut vegetables into bite size pieces. Place vegetables on the bottom of the cooker and add meat on top so veggies will cook evenly and thoroughly. Meats generally cook more quickly in a slow cooker than vegetables do.

Cut meat like roasts to the size required to fit into the slow cooker and brown it before placing it in the cooker.

Always cook with the cover on and for the recommended time.

One hour on high heat is equivalent to two to two and a half hours on low.

Use whole leaf herbs and spices for best flavor for all-day or all-night cooking.

Do not use the cooker for thawing or cooking frozen meats unless you first add at least a cup of hot liquid. For recipes containing frozen meat, add an additional four to six hours to the cooking time on low heat and two hours on high. Fill slow cookers at least half full so they will cook correctly.

1 can cream of mushroom soup

Prepare the evening before. Brown sausage to a gray color. Add onion and continue cooking until onions are sautéed. Chill.

Mix all ingredients together and place in buttered slow cooker. Turn on low and allow to cook for six to eight hours. Top with cheese and replace lid until cheese is melted, about 15 minutes.

Combine all ingredients in slow cooker. Cover and cook overnight, eight to 10 hours.