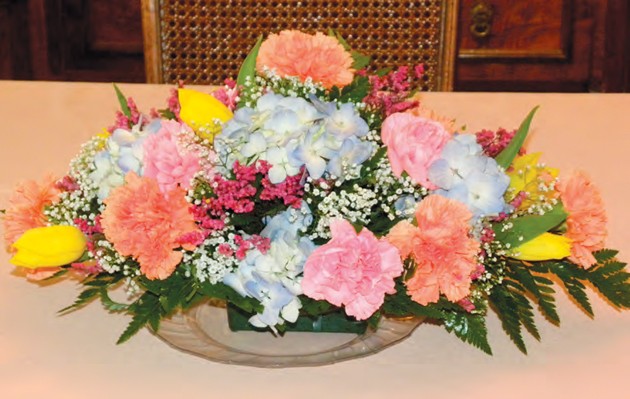 Flowers of any kind say “I love you” for Valentine’s Day. Take good care of them so they can be enjoyed longer.

For those of us who walk around oblivious to the sights, sounds and colors of the advertisements in stores, Valentine’s Day is coming on Tuesday.

What that means is either a long awaited opportunity to be a romantic and express true love and devotion or it means that it is time to get going, step out of the everyday mode and come up with something romantic before Tuesday.

If you are married to a gardener, I’m pretty sure that Valentine’s Day is not the time to present your beloved with a new shovel — unless you also plan to put a beautiful plant that says “I love you” into the ground. This does have possibilities because a well chosen and maintained plant is a gift that keeps on giving.

With that said, February is not the ideal month to be digging through the frozen earth to put a plant into the ground. A better choice might be an attractive potted plant — perhaps something that your valentine can enjoy indoors for now and plant outdoors later.

Cut flowers are much more transient, but they do convey the message of love and devotion. If you have seen the movie “Kate and Leopold” you may remember the scene on the meaning of flowers. The main character, Leopold, who is the Duke of Albany, was moved through a “time portal” from the early 20th to the 21st Century. According to the movie, he came from a time when suitors of class often conveyed their feelings through their choice of flowers. Leopold accompanied Charlie, his newfound 21st Century girlfriend Kate’s brother, to a flower shop to help choose a bouquet for a girl Charlie wanted to impress. Charlie, an impulsive sort, chose flowers that he liked in an array of colors — but the Duke of Albany steered him carefully to avoid flowers that spoke of disdain and disinterest to those which spoke of interest, charm, beauty, long-lasting commitment and love.

For the most part, we in the 21st Century don’t pay much attention to such subtleties of the language of flowers but we still have the notion that the red rose says “I love you.” For that reason, many romantic floral messages in dozens and half dozens will be delivered to sweet young things (and their older counterparts) next Monday and Tuesday. Some of the romantics in our midst will resist the charm of red roses and choose a bouquet of a different color knowing that red is not necessarily the ultimate shade of beauty in roses. Still others will opt for mixed flowers — possibly decorated with cupids and hearts — with no consideration of the unspoken meaning of each of the blossoms. It doesn’t matter at all.

The 21st Century recipients of any of these missives will understand the meaning as “I love you.” Since she will get the message in any case, you have the option to choose flowers based on color, style, appearance and longevity. Some flowers just last longer after they are cut than others.

If you wish to hasten the feeling of spring, you might choose tulips for your arrangement, but don’t plan on a long life for them. These flowers are not really long-lasting even when they are in the ground, much less after they are cut.

Roses are fairly short-lived but some colors tend to last better than others. Yellow or white roses tend to open quickly and decline quickly while red or coral colored flowers last a little longer. Some pink roses last a little longer. The decision isn’t really based on color as much as variety so there will be variations. Carnations are an attractive alternative that usually lasts longer than roses but chrysanthemums in all their variations are the longest-lasting blooms in a traditional mixed bouquet often lasting for up to two weeks. Oriental lilies also will last that long provided you remove the yellow or brown pollen tips as the flowers open. Hybrid delphinium, hydrangea and bouvardia will often last for about 10 days.

For all their reputation to the contrary, orchids are pretty tough blooms. They don’t like to be touched and are fragile in those terms, but they will last a good long while if they are kept moist and are treated with respect.

Having received the flowers, the next step is to keep them beautiful for as long as possible. Like everything else, we tend to look for a magic elixir — a flower fountain of youth — that will keep the flowers fresh, attractive and young. That doesn’t change the fact that the key need of cut flowers is water and plenty of it. You can do all sorts of things to flowers, but without water, they will soon be history. When you get your bouquet, check for water immediately whether they just arrived from the florist in a vase or as a wrapped bouquet. Despite their best efforts, sometimes vases tip in transit and they may need more water to fill them. Then add fresh water daily to keep them fully hydrated. If your flowers come wrapped or boxed without water, put them in water as soon as possible. When flowers are left out of water, the base of the stem tends to seal off to keep water inside, but it may also seal out additional water.

Cut the stems at a slant with a sharp knife so that new tissue is exposed to let water up the stem to support the blossoms. Scissors or nippers seem like an easy way to clip stems, but they tend to crush the tissue so that it is harder for them to take up water.

You can add a little sugar to the water you put the flowers in to provide a little nutrition to maintain the blooms. Better yet, use a floral preservative.

Most likely any flowers that come from a florist shop will already have some preservative in the vase. If so, make use of it by adding it to the water. If the flowers begin to droop prematurely, try putting the entire flower in a sink of water to help rehydrate it. Give the stem a fresh cut and put it back into the vase with fresh water. Another option is to add about a teaspoon of chlorine bleach per a quart of water to keep the bacteria at bay. You may have heard that putting an aspirin into the water will help preserve the blooms longer. Unfortunately, it won’t and your flowers don’t have a headache so save the aspirin for something that does.

You may also have heard that putting flowers into Sprite is helpful. Actually, it is. The Sprite provides both liquid and sugar needed to support the flowers and the carbonation acts as a preservative. Mix one part Sprite with three parts water for optimum advantage.

After about five days, most arrangements could use a boost. The easiest way to do it is to empty the vase and refill it with the right amount of water and flower preservative. If you have more time, take the flowers out of the vase. Rinse and trim the stems, pull away spoiled foliage and clean the vase well enough to drink out of it. Then refill it with water and floral preservative and put the flowers back into it.

When cupid shoots his arrows this Tuesday, he may hit you and you may feel extra motivated to express your devotion. Why not go for it?