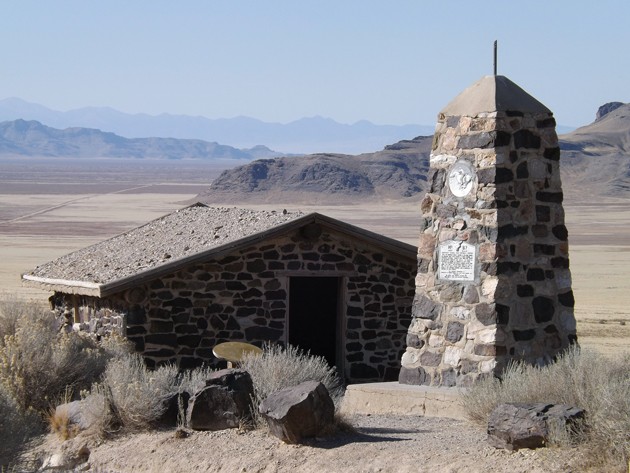 A Pony Express monument sits at Simpson Springs in the West Desert. The springs were the last chance for good water for nearly 100 miles.

“The whole scene is that of a somber, dreary waste, where neither man nor beast can live for want of the necessary food or water, and over which a bird is scarcely ever seen to fly.”

Editor’s note: This is another installment in a multi-part series on exploring the Pony Express Trail through Tooele County.

One of the most active areas of the West Desert along the Pony Express Trail in Tooele County was Simpson Springs.

Located 25 miles west of state Route 36, Simpson Springs is much the same today as it was before mule-drawn mail wagons, Concord Stages or Pony Express Riders traveled the route in the 1850s and 1860s.

Certainly, the American Indians, such as the Goshute and Paiute and possibly even the Fremont Indian cultures, used this oasis in the desert long before any white men came to the spring. Much evidence of these cultures has been found in the vicinity of the Old River Bed several miles west.

Back in the days of the Overland Stage and Pony Express, it took well-armed and brave (or crazy?) individuals to operate these lonely stations. Consider Porter Rockwell’s advice to Sir Richard F. Burton before Burton took his now famous trip across the desert in the summer of 1860.

Rockwell advised Burton to “Carry a double-barreled shotgun loaded with buck-shot, to keep my eyes skinned especially in canyons and ravines, to make at times a dark camp, that is to say un-hitching for supper, and then hitching up and turning a few miles off the road. Ever to be ready for attack when the animals are being in-spanned and out-spanned, and never to trust to appearances in an Indian Country.”

We take for granted the comfort and relative safety of nightfall and the stars coming out during a campout around a campfire. Back in the 1850s, however, sundown was probably a tense time because you never knew if an Indian, or even worse, a white bandit, was lurking just out of sight, waiting for the right moment to ambush and rob you — or worse.

Famed writer Horace Greeley stopped here for the night in the summer of 1859 and wasn’t impressed with the spring. He said, “I fear the hot suns of August will dry up this spring — while there is no other fit to drink for a weary distance south and west of this place.”

He talked about how the Simpson Springs station keeper lost his eight oxen and trailed them south through the desert for 100 miles without finding any water before, out of self-preservation, he gave up and returned to the station.

Burton also talked about the spring’s “Three names” and said the army called it “Simpson’s Springs,” the Mormons called it “Egan’s Springs.” and gentiles called it “Lost Springs.” Regardless of name, Simpson Springs was the last chance for good water and grass for nearly 100 miles across what was known as the “Great American Desert.”

Capt. James H. Simpson was disappointed when he looked west from the spring across the desert he was about to explore. He described the mountains to the west as, “Not a tree is to be seen upon them, nor a patch of green vegetation of any kind. They are fit monuments of the desolation which reigns over the whole desert.”

As for the namesake of Simpson Springs, in 1858 Capt. James H. Simpson, led by Mormon scout George Washington Bean, made a preliminary exploration of the desert as far as Dugway Pass and it was on this trip he made particular note of the springs.

Due to bad weather, Simpson cut his explorations short and returned to Camp Floyd for the winter. Then in early May 1859, Simpson and his exploring party left Camp Floyd en route to Genoa, Nevada to find a better wagon route from Camp Floyd. Simpson discovered many interesting things on the trip and his reports of the survey were published by Congress.

Simpson did not discover the springs in 1858, though, because they were already known by the likes of Chorpenning and Maj. Howard Egan. Egan, much like George Bean, was a man among men. His book of experiences while out on the trail called “Pioneering the West” is a gem and provides a rare, detailed glimpse of operations out in the West Desert and some personal near-death experiences with the Indians.

Egan wrote an article in the Deseret News on March 11, 1861 about the climate at Simpson Springs.

“Mr. George Dewees, the station keeper at Simpson Springs, informed me that a few days before my arrival, Wo-mo-gene, and a party of his Indians had been there and demanded the provisions belonging to the station,” Egan said. “The house being built of stone, so they could not burn it, and being otherwise well prepared, Mr. D told them that they could not have what they demanded without fighting. They went away mad, declaring that they meant to burn all of the stations and kill all they could this summer.”

True to their word, the Indians wreaked havoc along the Pony Express Trail that summer.

Simpson’s description of the springs bearing his name while he camped there on May 4, 1859 is as follows:

“The spring where we are encamped furnishes but a scant supply of water, which however, the mail company which has a station here, has collected in a reservoir formed by a dam across the ravine. The accommodations of the company at present are a Sibley tent, set upon a circular stone wall. There is an abundance of grass in the vicinity and cedar on the heights but not conveniently close.”

The party stayed overnight, and then made observations on the morning of May 5 and then continued toward Old River Bed.

Simpson’s exploration and his reports were instrumental in the Pony Express choosing the central route across the desert beginning in March 1860. Chorpenning’s buildings were used by the Pony Express, according to a study done by Fike and Hadley for the Bureau of Land Management on Pony Express stations in western Utah.

The Pony Express Trail is a fascinating chapter in the history of westward expansion of the United States, and Simpson Springs was right in the middle of it. Today, the desert vistas and mountain views from the spring, especially of 8,410 foot-high Indian Peaks in the Simpson Range, are beautiful yet desolate sites.

There is a BLM campground and a reconstructed Pony Express Station that is picturesque with the Simpson Buttes behind it. If you stop at this station, go out the back door and look at the distinct water line of Lake Bonneville upon the buttes to the west.

Next week’s article will continue about the area and other types of activity that occurred in the desert here: The Overland Stage and the Civilian Conservation Corps.