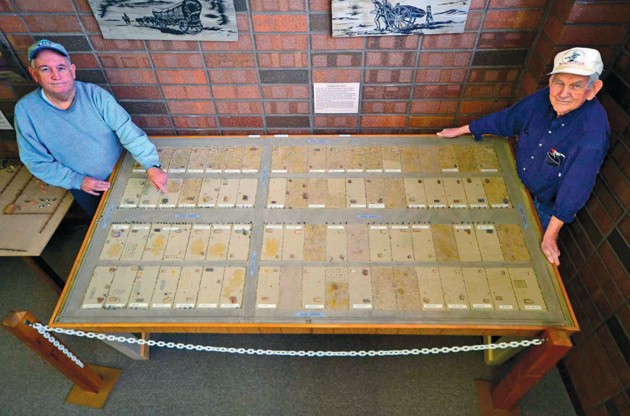 From left, Glen Stevens, Sons of Utah Pioneers’ Settlement Canyon Chapter president, and James Bevan, past director of the Tooele Pioneer Museum, inspect Tooele City’s model display as it would have looked in 1860. photo courtesy of Darrell Smith

As a teenager eager to drag Main Street in my sweet ‘56 Chevy, I could buy gasoline, get the oil checked and the windows washed all for 25.9 cents per gallon without ever getting out of my car. Instead, I would sit back on my naugahyde seat covers with my “three on the tree” and listen to my AM radio play the Beach Boys. Life was good.

Before it was the Caldwell Conoco Service, the property was the home of the Caldwell Hotel. The property was originally 20 rods long from east to west, and five rods wide from north to south. A rod is a land measurement where one rod equals 16.5 feet. That means this lot was 82.5 feet wide by 330 feet deep. It fronted Main Street. Its south border was today’s First South Street, which before was named Locust Street. Garden Street was its eastern-most boundary. The history of this lot started in the early 1850s.

When the small settlement of Tooele made a third move further to the north so Native Americans couldn’t rain arrows down on them from the top of Little Mountain, they laid out a town that was 100 rods (1,650 feet) from east to west, and 200 rods (3,300 feet) from north to south with the intersection of Main and Vine streets at the very center.

The townspeople cast lots for the various building sites. This particular piece of property was obtained by Erastus and Emily Foote by squatter’s rights, and was deeded to them by Tooele City in 1872. The Footes then contracted with Francis and Alfred Lee to build the hotel for them, first named “The Foote House.” On some maps it was called the Lee Hotel.

According to the “History of Utah’s Tooele County,” the building was two stories high and had an attic. It also had 10 bedrooms, a kitchen, a dining room and a parlor…It was constructed of adobe and was plastered inside and out. A veranda ran across the front where a guest could sit and rock in the rocking chairs during the summer time. The woodwork was beautiful…and coal oil lamps were used to light the rooms. Some of the first electric lights in town were installed there. Just as soon as service was available in Tooele, the hotel had a telephone installed. The phone number was two.”

The hotel had several different owners but was finally purchased by Robert and Agnes McKendrick and had its name changed to the McKendrick Hotel. Of this hotel, one newspaper stated “it is an excellent place at which to stop and one fares well when they are a guest of the house. Mrs. Mary Herron accommodates the hungry and the weary and is one place that offers the comforts of home. The McKendrick Hotel was sold…in 1901 to William H. Caldwell, for the sum of $2,500. The sale included four acre shares of water with the hotel and the land.”

In its run as a hotel, it was also a theater, a school room, a butcher shop and a commercial garden. The then Caldwell Hotel was torn down in 1945, and according to the Caldwell family, became Caldwell Conoco Service sometime thereafter.

For a fascinating look at the beginnings of Tooele, visit the Tooele Pioneer Museum at about 50 E. Vine St. This happens to be the location of Tooele’s first public library. There you will find photos, maps, mementos, artifacts and a model city that shows the first property owners and the old mud wall that once almost surrounded the entire town.

The Tooele Pioneer Museum is part of the mission of the Sons of Utah Pioneers’ Settlement Canyon Chapter. It is open to the public every Friday and Saturday from Memorial Day to the end of September. However, if you want to view the museum before then, individual and group tours can be arranged by calling Tim Booth at 882-1902.

Darrell Smith volunteers time as the publicity director of the Sons of Utah Pioneers Settlement Canyon Chapter. He also works as a docent at the Tooele Pioneer Museum. Smith can be reached at smithdar@q.com.