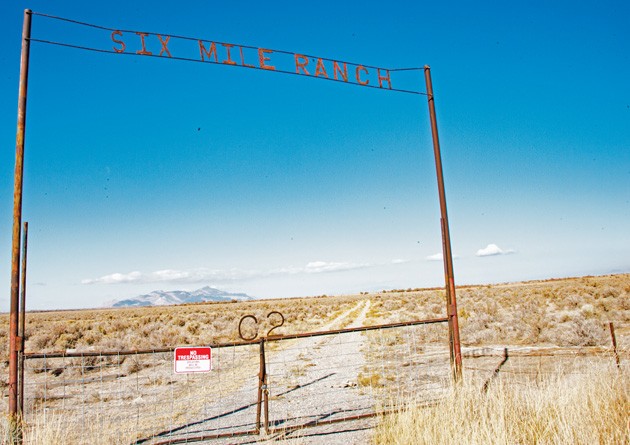 The gate for Six Mile Ranch north of state Route 138. The effort to annex Six Mike Ranch into Granstville is the subject of a referendum and a lawsuit.

The move to annex Six Mile Ranch into Grantsville City hit another snag as a 3rd District Court judge first issued a temporary restraining order pausing any action to complete the annexation and then canceled a preliminary injunction hearing and approved an order allowing the TRO to remain in effect until the Grantsville City recorder makes a determination on the referendum petition on the annexation.

On Oct. 21 Janet Conway, an attorney from Wanship, filed with the 3rd District Court a “petition for extraordinary relief” asking that the court find the certification of the annexation petition to be unlawful and void and to issue an order requiring the Lieutenant Governor’s Office to reject the annexation petition.

Conway represents the Erda Community Association, Ryan Sorensen and Kalem Sessions — who were sponsors of the incorporation of Erda ,Terry Matthews — an Erda resident who owns agricultural property adjacent to the annexation and Oakley Rogers — a Grantsville resident who is the contact sponsor for the referendum that seeks to place the annexation on a ballot for Grantsville voters.

The Six Mile Ranch Property was included in the incorporation of Erda, although the validity of that inclusion is the subject of a different lawsuit.

In the petition to the court, Conway asserts that the “annexation irreparably harms Erda, destroys the fruits of the incorporation process that petitioners have worked so hard to achieve, and causes direct and irreparable harm to petitioners, both as landowners in the annexed area and as residents of Erda.”

However, Welch approved a stipulation on Nov. 9 that allows the TRO to remain in effect until the Grantsville City recorder, in accordance with state code, determines the signatures on the referendum petition to be either sufficient or insufficient.

The stipulation also clarifies that Grantsville City and the lieutenant governor are not precluded by the TRO or the stipulation from perfecting or otherwise finalizing the Notice of Impending Boundary Action or the annexation that is the subject of the petition for relief.

The land proposed for annexation was in unincorporated Tooele County at the time the property owners filed an official “Intent to incorporate” notice with the city.

However, the property is within the boundaries of the voter-approved incorporation for the new city of Erda.

Erda residents voted for incorporation in November 2020. The City’s incorporation was certified by the Lt. Governor’s Office in January 2022.

The Grantsville City Council voted to accept an application for annexation from Six Mile Ranch for 8,934 acres it owns northeast of the intersection of state Routes 112 and 138 during the City Council’s Nov. 17 meeting.

Grantsville City Council voted to accept the annexation petition for consideration in December 2021.

After incorporating, Erda City filed a protest to the annexation that was heard by the Tooele County Boundary Review Commission. The Boundary Commission unanimously voted to allow Grantsville to proceed with the annexation process.

A group of around 22 Erda residents filed a request for a judicial review of the annexation with the 3rd District Court. Welch issued a ruling on Aug. 12, 2022, denying the residents’ request and approving Grantsville City’s motion to dismiss the request for judicial review. In her ruling Welch wrote that the plain language of the state annexation act indicates that the petitioners [the residents] did not have standing. She also said the petitioners did not follow the administrative process to appeal the annexation.