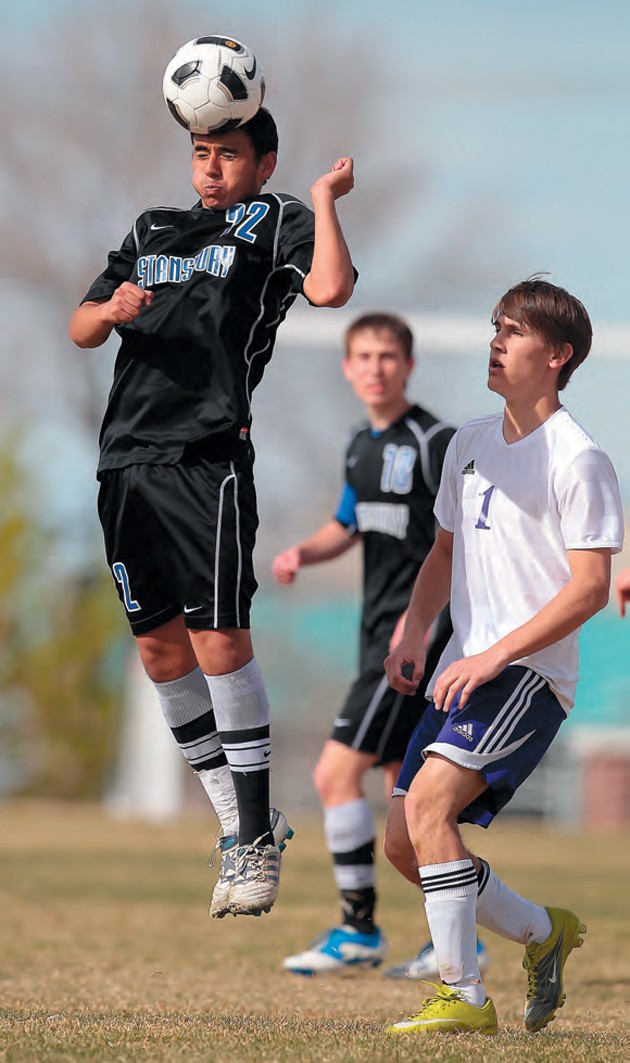 Stansbury junior Armando Herrera heads the ball Thursday against Tooele as Brian Kirk plays defense. The Stallions won their fourth region game with a victory over the Buffaloes.

Stanbury’s Ethan Babcock scored four of his team’s six goals in the Stallions’ 6-0 victory over Morgan in the region opener back on March 14. Last Friday Stansbury again scored six goals in a 6-0 win over Tooele, but this time six different players scored for the Stallions.

“We have a lot of players contributing now and we’ve worked hard on moving the ball. We’re finally putting things together,” said Stansbury coach Brandon Andersen.

“We’ve been working hard on corner kicks and set plays and now have scored five goals off set plays,” the coach said. The Stallions scored a pair of goals on set plays against Grantsville and two more against Tooele on Friday.

The Stallions pressured the Tooele net for nearly the entire 80 minutes Friday afternoon at Tooele, working the ball to the corners for crosses. Tooele played strong defensively for the first 40 minutes of the match, but were unable to mount any scoring chances themselves while having to continually battle against the Stallions’ offensive pressure.

Stansbury scored the first goal of the game at the 20-minute mark on a breakaway goal, and added a second goal in the first half at the 34-minute mark with a rebound on a header off the crossbar and kicked it in to make it 2-0 at intermission.

Stansbury improved to 4-2 in Region 11 play and has logged lopsided victories over Morgan, Grantsville and Tooele plus a 1-0 victory at Ben Lomond.

The coach said his team is looking forward to the second half of the region season which starts on Tuesday, April 10 at home against Ben Lomond. The Stallions’ two losses were 3-1 to Bear River and 4-1 to Ogden on their home pitch.

“The Bear River game was a low point. We had our star striker go down with an injury and also one of our top defenders was injured. We only have six seniors and three of them were injured. It gave an opportunity for some of our younger players to step up and that has helped us as a team. We’re really looking to play better in our upcoming games against Bear River and Ogden,” Andersen said.