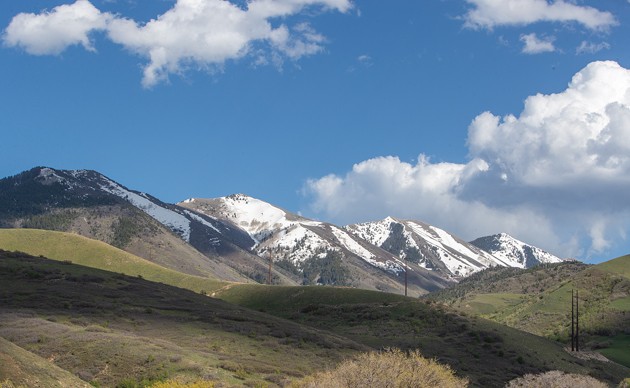 As the snow season comes to an end, there is still plenty of snow in the mountains above Tooele Valley.

Statewide, warmer temperatures have started bringing water off the mountains and into rivers and reservoirs.

“Utah’s snowpack is coming off and we’re already seeing the impact in our streams and reservoirs,” reads NRCS’s April Utah Climate and Water Report. “Most of the current observed streamflow levels range from 100 to over 250%, and we still have a significant amount of high elevation snowpack left to melt out. Soil moisture across the state is high at 81%, which will improve runoff efficiency as the snowmelt progresses.”

The report predicts “pretty good” stream flow through the month May and into July with Vernon Creek expected to run at 150% of normal and South Willow Creek forecast to run at 135% of normal.

The April report lists the snow water equivalent in Tooele Valley and West Deseret Basins at an average of 167% as of May 1, 2019, compared to 20% percent one year ago.

Locally, Ned Bevan, the Tooele City weather observer for the National Weather Service, reports April was a wetter than average month but snowfall for April fell behind the month’s normal.

Total precipitation at Bevan’s observation site in Tooele City was 3.71 inches for the month of April compared to a normal of 2.49 inches for April.

Snowfall in Tooele City for the month of April was 3.8 inches compared to a normal of 8.8 inches, as recorded by Bevan.

SNOTEL, or snow telemetry, are remote battery powered sites across western mountains that automatically measure and transmit information about snow depth, water content, rainfall, and air temperature. They are managed by the USDA’s National Resources and Conservation Service.

The NRCS has discontinued the monthly Climate and Water Reports until further notice due to ongoing hiring limitations at the NRCS and critical staffing shortages in the Utah Snow Survey program, according to an announcement in the April report.