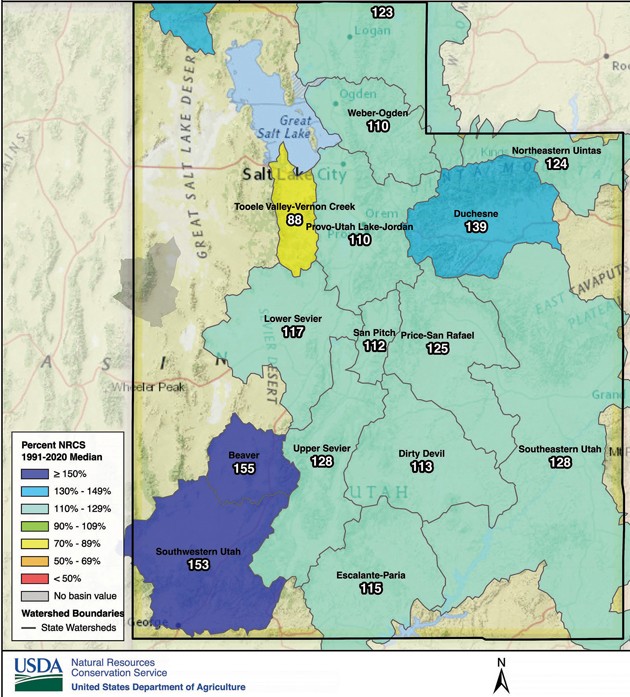 What a difference a few weeks can make.

On Jan. 1 the Tooele Valley-Vernon Creek basin’s snowpack was at 112% of normal.

Two weeks later, with little new snow added, the basin’s percent of normal has dropped to 88% as of Jan. 17.

December storms made a positive rebound for Utah’s snowpack, according to the state Department of Natural Resources.

With 95% of Utah’s water supply coming from snowpack, the state needs above-average snowstorms to help refill reservoirs, according to DNR officials.

Major reservoirs statewide are at 52% capacity. Thirty-five out of Utah’s 45 reservoirs are below 55% of available capacity.

“The last four months have been sort of a rollercoaster ride,” said Brian Steed, executive director of the Department of Natural Resources. “November was dry, but thankfully December storms put Utah in a better spot. It’s important to note that the drought is not over.”

The National Resource Conservation Service now bases their forecast percent of normal on the median, or mid-point, value, instead of the average value.

In their January 2022 Water Resources Outlook Report for Utah, the NRCS states  that because of Utah’s typical arid streamflow hydrology, where the majority of years have low flows with infrequent high flow years, along with lower overall runoff rates for the 1991- 2020 period, Utah had the highest concentration of decreased normals as result of using the new the new 30 year window.

Weather.com’s forecast shows snow showers for Tooele County on Friday with a possible accumulation of one inch in the valley.