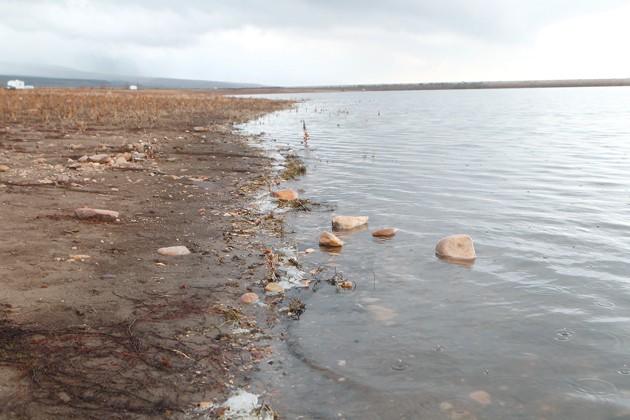 Although it rained cats and dogs Monday, snowpack statewide — including in Tooele County — is continuing to rapidly disappear.

Randy Julander, snow survey supervisor at the Salt Lake City office of the Natural Resources Conservation Service, said the county’s current basin average is 72 percent of normal, which is low for this time of year.

The county is faring slightly better than the rest of the state, but drought conditions are still a major concern, he said.

“These numbers are not average,” Julander said. “It’s pretty grim when we start looking at it. The bottom line is that we didn’t get hardly any snowpack increase in March. It was extremely dry and we’ve actually started melting down in a lot of places early, like Vernon Creek.”

He added, “What it means is we’re probably going to be in the 50 percent of average for runoff and it might come a little early as well. This is not a good situation to be in and is certainly not what we wanted.”

Although the snowpack locally isn’t looking great, Julander said Tooele County is faring better than the rest of the state.

“You’re in a little better position,” he said. “When you look at the Bear, Weber and Provo basins, all of them are in the low 60 percent of average.”

In terms of reservoir storage, Grantsville is at 54 percent of capacity, Settlement Canyon is at 50 percent, and Vernon Creek is full. Julander said these percentages aren’t good, either.

“We are exactly on the same scenario at last year, with one exception,” Julander said. “We’re starting this water year with far less reservoir storage than we did last year, so it’s kind of a double whammy on us.”

He said Tooele County residents, especially farmers and ranchers, will have a lot less water to use this year than what they need.

“It’s going to force some difficult decisions on their part,” he said. “In terms of growing crops, they may have to cut water off early and it may force two crops of hay instead of three. These are all kinds of things that we really don’t want to see, but we’ve got to play the hand Mother Nature dealt us.”

Lynn Taylor, water master for Grantsville Irrigation Company, said Grantsville residents will be in pretty bad shape if the weather doesn’t change and bring some rain. On April 15 he plans to turn the water on.

“The problem is we’re worse than last year because the snowpack is pretty close to the same, but this year our reservoir isn’t full like it was last year,” he said. “At this point we’ll give two turns from when we start up until we look at it again. We’ll proceed with caution, and I hope everybody will be cautious with it because we could be worse that last year. It all depends on the weather, but it’s not looking good right now.”

Gary Bevan, president of Settlement Canyon Irrigation Company, said Settlement Canyon is currently at about 41 feet high. That means there’s still 20 feet to go before the reservoir is full. Although Bevan normally turns the water on around April 15, this year he is going to wait to see if wet spring weather is in the stars.

“I think we’re going to plan on not having much water this year,” he said. “If we get spring rains, we can hold off longer on turning the water on, but if we don’t, then we can’t. We’ll wait and watch the weather because we’d like to hold off. If the reservoir was full, there’d be no doubt that we’d turn it on, but there’s no way it’ll be full in two weeks.”

Julander said at this point, the most people can hope for is a cool, wet spring to offset where the county is currently sitting.

“We won’t get enough snow in April and May to offset where we are,” he said. “The best we can hope for is to have lots of rain. That would postpone the irrigation season, but I don’t see that in the cards either. It looks like it’ll be warm and dry.”