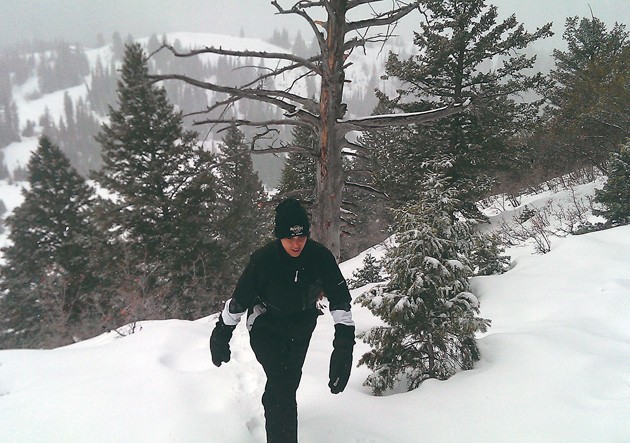 “In the depth of winter I finally learned that in me there is an invincible summer.”

Last Sunday started with a few inches of heavy, new snow on the landscape and my truck. It was pretty but it didn’t last. The temperature warmed enough for the snowfall to turn to rain, which made a mess of everything.

I hate it when lovely snow in the valley turns to mud and muck by rain. To get away from it, I headed for the mountains.

My wife, Mishelle, and I grabbed our snowshoes and drove to Big Cottonwood Canyon in the Wasatch Mountains. I knew if we could gain a few thousand feet of elevation, we’d be in a winter wonderland again. The trailhead I often use in winter for snowshoeing, hiking or cross-country skiing is called Mill D North Fork.

I like this trail. No matter how hard it snows or how deep the snow gets, the trailhead is usually plowed. And the 2.4-mile hike to Dog Lake is relatively safe from avalanches.

To get there from Tooele County: In Salt Lake Valley, take the 6200 South exit off of Interstate 215 and follow the signs to the mouth of Big Cottonwood Canyon. Proceed up the canyon on SR-190 for approximately 9.4 miles to the trailhead, which is a wide siding on the north side of the road. You will know you’re in the right place because there is a large, old brown sign with a blue heading that reads “Meeting of the Glaciers.”

The sign provides information on glaciation that formed the canyon. There is also a sign with a map and distances on it here. Elevation at the trailhead is 7,268 feet.

We parked in this area with snow coming down sideways. The temperature was 31 degrees and the snow was tiny round nuggets (called graupel) that stung our faces and got into our eyes. We headed north up the hill after we got our snowshoes on.

Into the storm we went on the trail, which makes a sharp turn east and climbs the face of a mountain on an angle through dense forest. The foliage here is interesting because the south-facing slope receives more sunlight than the slopes across the canyon. As a result, there is more biodiversity in the form of mountain mahogany, gambel oak and other types of trees and shrubs mixed in with Douglas fir, white fir and aspen.

Some of the Douglas fir here are large and there are a few spots in the trees where big, lichen-covered boulders are scattered. We stopped for a moment and my wife decided to plop down and make a snow angel. Behind her I noticed a fat, gray squirrel sitting on a snowbank, oblivious to the falling snow, and stripping down a pine cone. At its feet was a large pile of pine cone shavings. We watched him disappear behind the snowbank into the rocks and then reappear with a new pine cone to strip down. It’s always fun and educational to watch little creatures in their natural environment.

The snow on the trail was hard-packed, but if you ventured off even slightly without snowshoes, you sank up to your waist. I tried this a few times and it’s a helpless feeling, not to mention exhausting, to have to break trail through snow that deep. It was a beautiful sight to look down on the canyon floor through the snow squalls. Visible was Big Cottonwood Creek, which had deep snow piled along its banks.

If you continue on the trail, you have the option to follow it 2.4 miles to Dog Lake. I really like this route during winter. It exposes you to little avalanche danger as the slopes are forested and keep the snow well anchored. Dog Lake sits in a little bowl at an elevation of 8,800 feet. But if you venture beyond Dog Lake, you will find yourself in avalanche country.

There is a good booklet published by the U.S. Forest Service entitled “Basic Guidelines for Winter Recreation in the National Forests of the Intermountain Region.” This booklet goes into great detail on avalanche safety and is helpful. Some of the main principles are that windblown snow is deposited on the leeward slope of hills and forms slabs and cornices that can shear away and roar down the slope in avalanches.

According to the pamphlet, the most dangerous areas are from the crest of an open slope down to the toe of the slope. Any movement or disturbance in this area can cause the entire slab to give way. It also states that 80 percent of avalanches occur during or shortly after storms. Keep that in mind. It is also best to stay off slopes with angles between 30 and 45 degrees, and that face to the north, northwest or northeast.

If you plan to snowshoe, ski or snowmobile in backcountry mountainous areas, it is highly advisable to take an avalanche safety course first, and invest in avalanche safety gear, such as a beacon, probe and shovel. Also, check with utahavalanchecenter.org for current avalanche conditions. Respect what the avalanche center advises, heed all weather and condition warnings, and don’t push your luck.

Remember: Wearing an avalanche beacon is only useful if you have a partner or partners along who each are wearing one, too — and have been trained in snow burial recovery. A great resource for avalanche training is utahavalanchecenter.org.

If you stick to the main trail to Dog Lake, you won’t be exposed to much avalanche danger, but if you venture off the beaten path, the scenario changes significantly.

I enjoyed snowshoeing to Dog Lake in the storm. It was the perfect escape from the muck down in the valleys. There’s nothing like the peace and quiet of a good snowfall in the woods. For more information on the Mill D North Trail, contact the Public Lands information center at 801-466-6411.