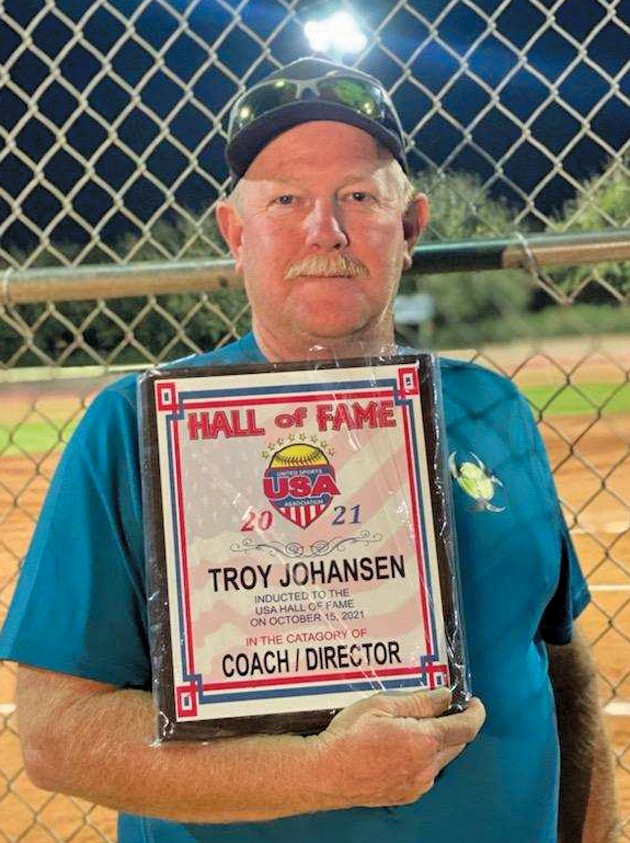 Troy Johansen was presented with a plaque to signify his induction into the USA Sports Hall of Fame on Saturday night in Mequite, Nevada.

The United States Specialty Sports Association surprised Grantsville’s Troy Johansen Saturday night at a softball tournament in Mesquite, Nevada. The Association inducted him into its Hall of Fame as a coach and director.

“It surprised me, I never saw it coming,” he said.

Johansen runs the Deseret Peak Complex softball fields and has coached youth softball for 47 years. He directs multiple tournaments throughout the year including several mega-tournaments with 50 or more teams. The facility hosted 26 tournaments this past season.

“The most teams we’ve had in a tournament is 69,” Johansen said. The softball coach was in Mesquite with his team “Utah Toxic” competing in a tournament. Toxic team members come from Grantsville, Tooele, Stockton and Erda.

Johansen is known to work long hours maintaining the softball fields at Deseret Peak, and trying to make enough money to maintain the fields through selling concessions at the facility.

The softball facility also has hosted college tournaments with teams such as USU Eastern, Western Nebraska, Salt Lake Community College and Snow College hosting games. With other teams outside the state making the trek to Deseret Peak to play in tournaments.

One well known summer tournament is Dash-N-Splash with players cooling off between games at the nearby Energy Solutions Aquatic Center.

The United States Specialty Sports Association (USSSA) was founded as the United States Slow-pitch Softball Association in the spring 1968. Over that last weekend of August 1968 the first USSSA World Softball Tournament was played in West Allis Wisconsin. Over the past 40 years USSSA has grown from a couple of thousand slow-pitch softball players to over 3.5 million participants playing 13 primary sports. In fact, USSSA sanctions teams and individuals in 38 sports.