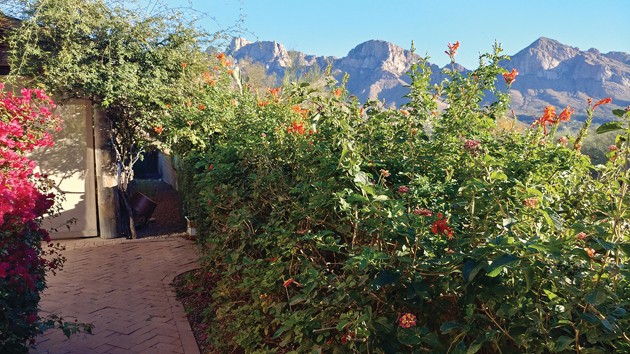 Lush settings like this would not be possible without photosynthesis.

December 14, 2017
Solar panels are impressive, but photosynthesis is the real solar power

For us who live in sunny areas of the country, we are certainly familiar with the emphasis on solar power. This has been a long time coming, and it’s great to see so many innovations making their way to market.

The photovoltaic (PV) panel is at the heart of turning sunlight  into electricity. In the last few decades, these panels have become more efficient, producing more power per square foot than before. It’s likely that there will be further breakthroughs that will occur resulting in higher energy outputs from small panels.

Much of the solar panels you see installed right now are encouraged by tax reductions and credits. You can make up your own mind if that is good or bad, but the fact is you now see a lot more roof top power being generated at residences and businesses. Solar shade structures or parking tops can be seen on Tooele’s Main Street at Subway and Birch Family Pharmacy.

There are some common misunderstandings related to the majority of solar power generation systems you see. Most of them are “net metering” systems, meaning that they work by feeding power back into the grid. If your system feeds back more than you use, you get a credit. If you supply your power company less power than you consume, you pay the difference. Also, these systems work only when the power from the utility connection is on. If you have a power failure in your neighborhood, you still won’t have lights on or power to consume. This is to assure the safety of electrical workers who would repair your connections.

Another reason you won’t have electricity is because it takes power to operate the inverter equipment that converts the power your solar panels generate into the right specifications to feed into the power grid. Unless you have a sizeable battery storage set up, or have a backup generator online, you will be in the dark just like all of your “non-solar” neighbors.

I recently spoke with a foreman for a large power utility. He said while he is a fan of solar installations, he feels that the biggest shortcoming is mankind’s penchant to get up earlier and stay up later than when the sun is shining. As a result, energy needs to be stored in some form, or augmented to provide power. Right now that is primarily done using coal and natural gas, and in some cases, nuclear and hydro-electrical facilities.

But despite all the progress in solar technology, it’s a real yawner compared to the natural solar energy that is going on all around us — photosynthesis. Since the beginning of time, and without our help or intervention, this type of energy is the very stuff of life.

Photosynthesis is happening all around us, so much so that it can easily escape our notice. It’s fair to say that photosynthesis and related plant processes can be termed as the “real” solar power. The word itself is a compound word, comprised of photo, meaning “light,” and synthesis, meaning “to put together.”

The pigment that makes most plants green (some are more purple, for instance) is chlorophyll. Some plants and trees are entirely green, such as the umbrella plant, the Palo Verde tree, and many cacti. But this pigment does much more than make plants look pretty. Chlorophyll harnesses the sun’s rays and uses solar energy to make sugars from the carbon dioxide and moisture in the air. In turn, the sugars are fuel the plant uses to grow its roots, trunk, stems and leaves. Plants aren’t alone using photosynthesis in this way; some types of bacteria and algae do, too.

In fact, there is progress being made in developing algae into a renewable and dependable energy source. That’s because algae stores the energy it produces through photosynthesis in the form of oils (lipids) that can be extracted, refined and used to fuel engines of sorts that are currently in use. Algae is grown in lagoons, harvested regularly and the oil is processed out by using either solvents or sound waves. When algae grows, it consumes a significant amount of carbon dioxide, further contributing to a clean environment.

Perhaps there will come a day when algae production facilities are located right next to power generation stations that can both refine oil from algae and provide heat and carbon dioxide to further stimulate algae production.

With photosynthesis, there are several steps that occur in plants and trees to create sugars from carbon dioxide and the sun’s energy. We don’t need to understand the process to enjoy it or to make practical use of it. Those who have orchards or vineyards know firsthand that you need to have a good ratio of leaves to fruit to get the best and sweetest result. It takes adequate leaf “real estate” on the vine or tree to support both the life processes of the plants as well as produce an optimum product.

So here’s a nod to photosynthesis, the original, genuine green power! Although most of the leaves are off the deciduous plants in our area, there are still plenty of evergreens to enjoy. Add to that the holly, complete with plentiful red berries, and we’ll get the boost we need until spring returns and the gardening season is back.