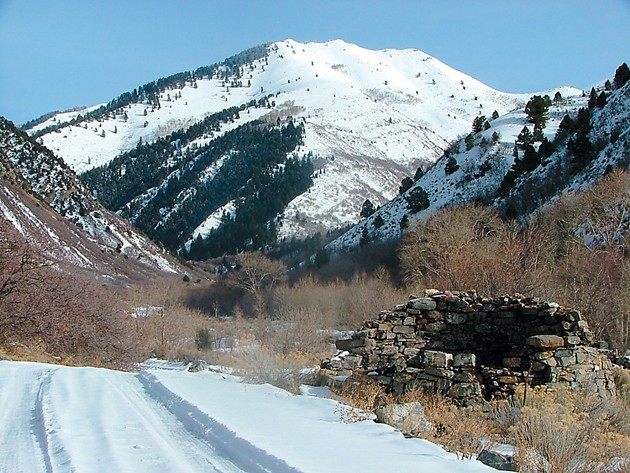 Along the main road up Soldier Canyon are several pioneer-era kilns. The kilns were used to make charcoal, which was sold to the mining smelters in the area.

“We are made wise not by the recollection of our past, but by the responsibility for our future.”

Last week’s article looked at the setting and geography of Soldier Canyon and mentioned that several old, stone charcoal kilns exist there in stages of decay.

A closer look at the kilns may raise awareness and help preserve them before they’re lost. During my research, I discovered a nicely packaged paper entitled, “Charcoal Production in Tooele County, Utah — A Historical Record of a forgotten Industry” by Douglas H. Page, Sarah E. Page and Thomas J. Straka.

The document, which is Tooele County Historical Society (TCHS) Special Publication 2014-1, is a treasure trove of information on the old charcoal kilns. There are several illustrations that show how the kilns were utilized, their approximate location, size and current condition.

According to the paper’s authors, there were 19 charcoal kilns constructed on nine kiln sites in Tooele County. Unfortunately, only seven remain, four of which are in Soldier Canyon. The kilns in Soldier Canyon and other parts of the county were built largely due to the efforts of Stockton founder Col. Patrick E. Connor.

When the Civil War broke out, the federal garrison at Camp Floyd was abandoned as the Army split down the center, half siding with the Union Army and half siding with the Confederacy. The troops had been heavily engaged with protecting the mail routes through Utah to California and their departure, in the opinion of President Abraham Lincoln, left a dangerous void.

It was essential that California remained aligned with the Union and the mail, which was the principal line of communication, was a vital link. The Union was also uncertain as to whether the Mormons would remain loyal or side with the Confederacy. The threat of Indian trouble interrupting the mail along the trail was a possibility, too.

Several regiments of volunteer troops were authorized in California with orders to travel to Utah and ensure that the mail route was kept open and to watch the Mormons. The California volunteers were led by Connor, a boisterous, opinionated Irishman who aspired to attain fame and recognition on the battlefields of Virginia.

Connor was disappointed that his volunteers were relegated to guard duty and mail escort. Connor dreamed of confrontation with the Confederacy, or if not that, the Mormons where he could prove his skill as a commander and attain battlefield glory.

These dreams were never realized, however, as Connor’s repeated requests for his command to be transferred to the eastern battlefields were denied. The Mormons also proved to be much less of a threat than anticipated. Connor had a terrible relationship with Brigham Young, and he decided if he couldn’t defeat the Nauvoo Legion on the battlefield, he would antagonize Young in another way.

Connor had prospecting experience and knew that Utah’s mountains contained great mineral wealth. If rich deposits were discovered, a full-on mining rush would ensue, flooding Brigham Young’s Zion with gentiles who would be beyond the control and influence of the Mormon church.

To realize his goals, Connor put large portions of his command on leave with guidance to prospect. These efforts were successful as wealthy deposits were discovered in Ophir, Bingham Canyon, Alta, Park City and dozens of other locations.

Of local importance, according to TCHS Special Publication 2014-1, Connor established the Rush Valley Mining District in 1862 and by 1865 there were over 500 mining claims in the district, most of which were within two miles of Stockton.

These mines produced tremendous amounts of ore that had to be processed. Smelters, such as the Waterman and Chicago, were built near Rush Lake. The furnaces of these smelters had to be fired, but transportation infrastructure was nonexistent. The only economical and readily available fuel source were trees on the mountains.

However, the wood from the trees had to be converted into charcoal. Charcoal was desirable because, according to TCHS Special Publication 2014-1, it burned twice as hot as wood, weighed a third as much, and took up less storage space. To facilitate the conversion of wood — primarily pinyon pine — to charcoal, numerous charcoal kilns were built in Tooele and Rush valleys.

A May 30, 1934 article in the Deseret News entitled “Charcoal Kilns of Pioneer Days still stand in Tooele County” described the construction and operation of these structures. According to the article, many of the kilns in Tooele County were built by a stone mason named James “Jimmy” Hammond.

The artisan’s skill is evident in the Soldier Canyon kilns. Irregular limestone chunks were fitted together in such a way the kiln’s exterior still appeared smooth. When completed, the kilns stood nearly 20 feet high from the base to the top and had a beehive-like appearance. Hammond was also responsible for helping build Tooele’s first city hall, which still stands at 39 E. Vine Street and is home to the Daughters of Utah Pioneers Museum.

The article also described the actual operation of the kiln: “Logs were piled full length tier upon tier. Then in the front of the kilns were doors near the ground where the kiln was lighted, fired and finally the fire withdrawn following the required burning. There were also small holes around the bottom the size of a brick which were opened to let air in and prevent gas explosions.” It took 4-5 days to complete one burn and then a day to clear the kiln and remove the charcoal. The redundant kilns were fired on a rotation to keep the smelters continually supplied with charcoal, according to the article.

Becky Bartholomew wrote an article specifically about the Soldier Canyon site entitled “Charcoal Kilns and Early Smelting in Utah” for the History Blazer in May 1996. She wrote the timber source for these kilns was Bald Mountain to the south and that there were two large buildings, several small ones and a dugout where approximately 15-20 families lived and worked the Soldier Canyon charcoal kilns.

In pioneer times, harvesting and transporting timber to the charcoal kilns was big business. In its heyday, over 200 men were involved in the endeavor. The smelters had a voracious appetite and they didn’t care where the charcoal came from.

Many poor citizens either supplied the kilns with wood directly or built their own crude charcoal “pits” where they produced their own charcoal that they sold to the mills. To give an idea of the scope of the operation, an 1874 newspaper article stated that 20,000 bushels of charcoal were on hand at any given time in the storage shed at the Chicago Smelter.

Tooele and Rush valleys were filled with not only smelter smoke, but smoke from dozens of charcoal kilns that must have been run around the clock to feed the hungry smelters. The smelters are gone, but you can still visit the location of the Chicago Smelter just few miles south of Stockton. There, a stone marker commemorates Col. Steptoe’s Camp on the west side of SR-36.

In Soldier Canyon, the remains of four charcoal kilns are visible in varying stages of decay. A winter snowshoe adventure up the canyon could be a pleasant outing now, with a thick layer of snow after this week’s storm.

Bartholomew stated that, “Because pioneer charcoal kilns in Utah have largely disappeared, the Soldier Canyon site is worth preserving.” Through hard work and cooperation between property owners, concerned citizens, and local, state and federal agencies, these artifacts can be preserved so that future generations can look at them and consider the colorful mining history of Tooele County.