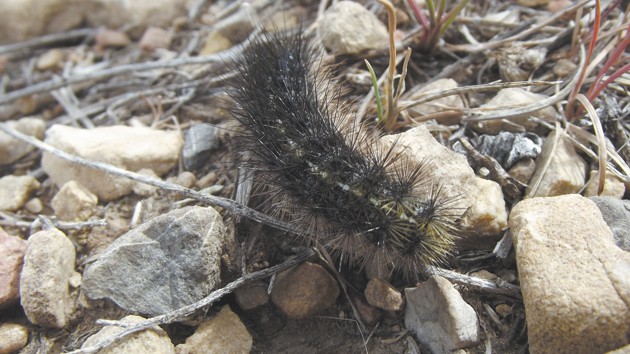 This caterpillar was found frantically scurrying across the path of a trail in the Pine Canyon area. It was not harmed or disturbed during its photo shoot.

May 15, 2014
Some caterpillars have specific defense methods

During a Lepidoptera’s second metamorphic stage as a caterpillar, known as “larva”, moths and butterflies are given the bad reputation for the disastrous devouring of particular herbs, crops, vegetation, and plants. Although they are usually admired as adults for their beauty and fascination, caterpillars in this stage have diversified forms to keep them safe.

For example, caterpillars have many predators and depending on the species, they can be colored, armed, or sometimes their body is shaped to camouflage, matching their provided host plants. Some caterpillars mimic thorns, bird droppings or are simply colored to match their vegetation.

Other known species however, use aggression or intimidation for warning off predators. Some caterpillars have long organs intended for wiggling or whipping at wanderers to frighten them, while others make a disturber timid by exhibiting unexpected violent thrashes at them. An interesting note, after its metamorphosis, one specific moth, the Walnut Sphinx, also known as “Amorpha juglandis,” whistles loudly in order to scare off birds when it is attacked.

Some species of caterpillar have spikes on their bodies that are supplied with venom. The venom effect on both humans and animals can be irritable but of itself is harmless. It can however, induce diseases and then cause sickness or even death. Certain caterpillars regurgitate acidic juices or emit foul odors at attackers as their defense method.

Did you know that a caterpillar might have as many as 4,000 muscles in its body? This is in sharp contrast to humans, having only 629 muscles!

Addie T. Lindsay is 17 years old and is an accomplished writer and photographer of wildlife creatures, big and small. She can be reached at CritterChatter@Live.com.