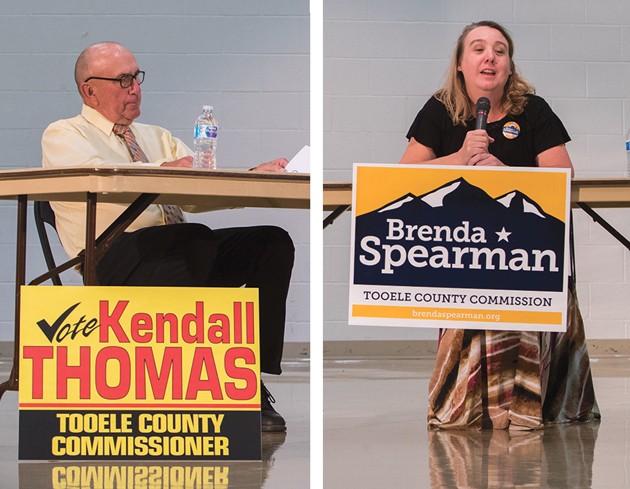 October 9, 2018
Spearman and Thomas tangle on economic development at debate

The debate, sponsored by the Tooele County Republican and Democratic parties, covered topics ranging from the proposed change in county government to economic development and population growth. Transcript Bulletin Staff Writer Tim Gillie selected the questions and moderated the debate.

The candidates for Tooele County Commission Seat B both called for a more prudent approach to development in the valley.

Thomas said the thousands of jobs connected to the in-land port in Salt Lake County will bring further growth to the county, as Salt Lake Valley runs out of room for more housing. He said the county needs to slow down growth and “get it right.”

“We’re going to have one opportunity to develop Erda, Stansbury, Lake Point area,” Thomas said. “That’s where they’re coming, folks. Growth is coming but we need to decide what we want Tooele County to be, not the developer.”

Spearman said government and residents need to work together to figure out what the county will look like through the growth. She was critical of the current county commissioners and the way they’ve handled community complaints about development.

“We have residents showing up in record numbers to commission meetings and saying what they would like to see, and our commissioners are ignoring it and they’re not doing what we as residents and voters want,” Spearman said. “So we really need someone in there that’s going to listen and pay attention.”

On rising taxes in the county, Thomas said he would prefer smaller tax increases each year to avoid massive tax increases, like the 88-percent increase approved by Tooele City this year.

“If we want a good community, you’re going to have to pay,” he said. “But let’s be smart and frugal with our responsibilities and make sure every dollar has a job.”

Spearman said continued annual tax increases, even small ones, would be a burden on unincorporated Tooele County residents who have seen jumps in the municipal services tax in recent years.

“At some point we need to stop it for a few moments, re-evaluate, figure out what our needs are — not our wants, but our needs — and reallocate those resources properly and efficiently,” she said.

Spearman and Thomas also clashed on their preferred approach to economic development in the county.

Thomas said the communities within the county need to work collectively to bring businesses in. Spearman said some collaboration is useful but the county needs a full-time employee focused on economic development, with particular focus on unincorporated Tooele County.

“We do not have anyone working full time, 100 percent of their time, 40 to 60 hours a week, on our economic development,” she said. “ … So the first thing I think we should do, and it will cost us a little bit of money, but I think we need it, is to have an official, full-time economic development person that would work for Tooele County to bring in corporations, jobs, a variety of industry.”

The entire debate was broadcast live and is available to view on the Transcript Bulletin’s Facebook page.