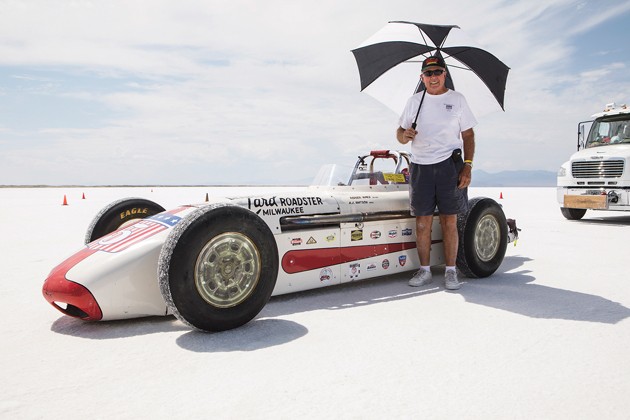 Driver Jerry Carbone stands next to his car getting a little shade while he waits in line to takes his turn running the salt flats.

Since 1914 racers have ventured to Tooele County’s salt flats near Wendover to try and set new speed records.

The Southern California Timing Association’s Speed Week will return to the Bonneville Salt Flats this weekend.

Speed Week draws racers from all over the world who drive hot rods, roadsters, belly tankers, lakesters, motorcycles, streamliners, and even diesel trucks that want to run the International Speedway in a quest to have their name added to the list of record holders.

Racing begins on Saturday at 10 a.m. and will run until 7 p.m. Racing is scheduled to start at 7:30 a.m. Sunday through Friday.

Entry passes for spectators may be purchased at the entrance to the salt.

Spectators can walk through the pits, view the vehicles, and talk to the drivers and crew members.

The SCTA advises spectators to bring a hat, sunglasses, and shade. All semi-permanent spectator areas require a tarp flooring as a covering on the salt.

Binoculars are also recommended as the race vehicles are a quarter mile way when they run the race course.

Vendors will be available with food, eyewear, sunscreen and more, according to the SCTA.

The spectacular scenery and racing conditions at Bonneville make it one of the most popular areas in the world for speed, according to the SCTA.

Additional information about Speedweek can be found at www.scta-bni.org.