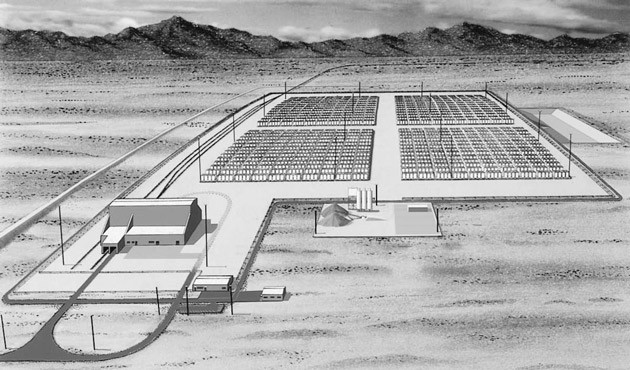 Tooele County is one step closer to becoming the temporary home of some of the nation’s spent nuclear fuel rods as the result of a decision handed down kast week by the Nuclear Regulatory Commission. The Skull Valley facility, shown in the above illustration, could be operational by late 2007 or early 2008.

With a nod of approval from the Atomic Safety and Licensing Board, (a three-member panel of the Nuclear Regulatory Commission,) Tooele County is one step closer to becoming the temporary home of some of the nation’s spent nuclear fuel rods. The board recommended (2- 1) Thursday, that an operating license be granted to Private Fuel Storage (PFS), a consortium of eight nuclear utility companies seeking to store spent nuclear fuel rods on the Skull Valley Band of Goshute Reservation.

The board rejected the state’s most recent assertions that the above-ground site is too risky due to thousands of overflights by armed F-16 jets traveling to and from Hill Air Force Base to the Utah Test and Training Range. While the board has submitted a favorable recommendation, it is still up to the entire NRC to make a final license decision.

A license would allow PFS to construct and operate a spent nuclear fuel storage site on the reservation. The site could house up to 4,000 casks filled with highlevel radioactive waste. Each would weigh some 180 tons. If created as planned, the facility would consist of a cluster of 500 concrete pads, each 67-feet x 30-feet, on which the cylindrical storage casks would sit. Each carbonsteel- encased concrete cask would be 19-feet tall and 11-feet in diameter and would hold a stainless steel canister which houses the rods.

Whether the board’s recommendation is a step in a positive or negative direction depends upon whom you ask.

According to PFS members who applied for the license nearly eight years ago, the board’s approval is terrific.

Sue Martin, the company’s legal counsel, said she is “very pleased” that in the end the board sided with PFS. “I think the fact that this whole process was over sevenand- a-half years long is another indicator of how thorough and rigorous it was. We had to jump through a lot of hoops, bend over backwards and gather additional data” to get this far, she pointed out.

PFS Chairman of the Board and Chief Executive Officer John D. Parkyn said the action, “is a great advancement for the nuclear industry in America … This facility, which complements the proposed permanent facility at Yucca Mountain, will allow the industry to move forward with a centralized, safe, secure facility and will provide an important alternative to the need to continue addressing storage for spent fuel at 72 separate locations across the United States.”

The Tooele Transcript-Bulletin was unable to reach tribal Chairman Leon Bear for comment, but in January Bear said because the process has taken such a long time (the license was originally applied for in 1997) he will be happy regardless of whether the project gets full approval or not. Bear added, of course, that he hoped for full approval.

If the license is confirmed, Bear said the tribe wants to “hit the ground running.” But if it is not, “There could never be a replacement for such a high-profile project.”

On the opposite side of the spectrum, Sen. Orrin Hatch (RUtah) said, “I strongly disagree with the board’s decision. But to be honest I expected it to go this way.”

The governor said “there seems to be a bias within the NRC in favor of the nuclear industry on this issue, and we have already set our sights on other ways to stop this plan.”

Mike Lee, general council for Gov. Jon Huntsman, Jr. said, “We’re still fighting the good fight.” He added that the governor “has made this [nuclear storage issue] a real priority.”

Lee said in the “worst case scenario,” the spent nuclear waste could enter the state in as little as two years.

“We’re doing everything we can, legally and politically, to make sure that doesn’t happen.”

Utah does not produce this dangerous waste, yet the federal government wants to make us the nation’s nuclear waste dumping ground.”

Groenewold added, “This absurd decision puts the nuclear industry in the driver’s seat, and we have to redouble our opposition or we’ll get bowled over.”

While the Atomic Safety and Licensing Board has given the project the go-ahead, the entire Nuclear Regulatory Commission will be in charge of making the final decision.

If the license is denied, PFS can make an appeal to the commission for reconsideration. An plea could even be made to the U.S. Court of Appeals if necessary. However, if it is approved, the state has the same right to take the matter back to the NRC or an appellate court.

Either way an appeal is likely. Even if the operational license is granted some hoops still need to be jumped through before site construction can begin.

One hoop is to get the land-lease agreement between the Goshutes and PFS approved by the Bureau of Indian Affairs. Another is to obtain a right-of-way from the Bureau of Land Management (BLM) to build a north/south rail line down the west side of Skull Valley. The rail spur would connect to already existing rail lines that run east and west. Part of this approval process includes a lengthy study by the Air Force, which hasn’t even started.

However, Martin said even if the rail line option was taken away, there are other methods to get the waste to the site. She said a transfer station could be built that would allow containers to be taken from trains and loaded into heavy-haul trucks, which would then be driven to the site.

Martin said “it’s ironic” because that was the option in the first place, but due to concerns over added traffic on the Skull Valley Road, the rail line plan was created. Right now PFS remains in the wait-and-see mode, but Martin said if everything was to go in favor of PFS, the site could be operational by late 2007 or early 2008.

If the license was granted the next step for PFS would be to market the site to get signed storage contracts from nuclear utility companies across the nation.

Once the site is operational the casks could stay as long as 50 years. PFS has a land lease contract with the Goshutes for 25 years with a 25-year renewal clause written into the contract.

PFS insists that once the casks would not remain in Skull Valley forever. However, if the casks remained at the site more than 50 years, the next step would be to see if the Goshutes would extend the lease.

The state is simply hoping the casks never come.