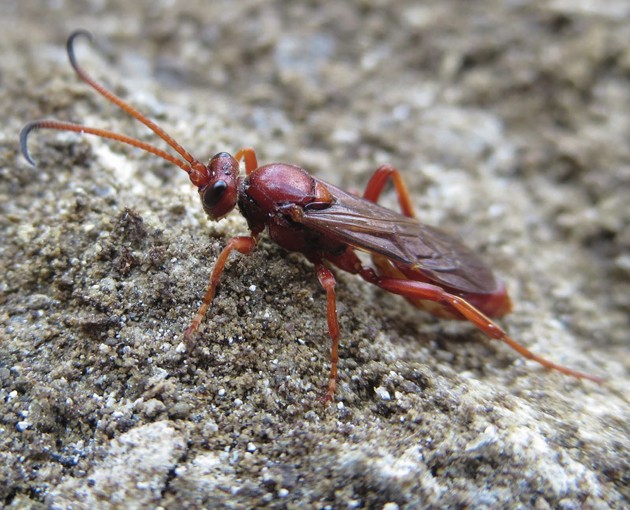 A spider wasp casually lurks on the ground near Smelter Road above Tooele City. It was photographed and left unharmed.

Named particularly after their most pursued prey, the spider wasp is of the family of wasps consisting of Pompilidae and is known for the female’s common habit of hunting spiders in order to provide hosts for their larvae.

These wasps are physically slender and are equipped with long legs enabling them to dig burrows. Varying on the species, which is some 5,000 different species, spider wasps can grow up to 2 inches and their wing coloration generally range from gray, bright reddish-orange or clear. As for their physical body colors, they are most commonly found to be black, metallic blue or reddish-orange.

Although spider wasps are weaponized with powerful stingers, they are not known for aggressive behavior and are not often reported for stinging humans. Spider wasps use their stingers in order to overpower spiders by paralyzing them, allowing them to drag the motionless arachnid to its burrow. By vigorously harassing a found spider, the wasp will attempt to sting it several times until enough venom is injected.

Once a spider is paralyzed and helpless, the spider wasp will either drag it to a burrow that was made before hand, or will make a fresh one. Sometimes these wasps will not bother digging a burrow, but will simply commandeer a spider’s own burrow. Once an arachnid has been captured, it is placed inside the burrow to have a single egg laid on its abdomen. From then, the entrance of the burrow is sealed off by the mother wasp and the egg remains there over the winter, eventually hatching and feeding on the live spider. After the larva devours the spider, it spins a silk cocoon inside the burrow to pupate (the stage of transition between larva and adult) and matures into an adult by the following summer.

Adult spider wasps can commonly be found feeding on their dietary substance, flower nectar, or seen walking on the ground looking for spiders, or even spotted dragging one off. Sometimes, when a spider is too difficult to drag, a spider wasp will bite off a few of its limbs to make it easier. Victimized spider species can include wolf spiders, huntsman spiders and baboon spiders. The size of prey can influence the development of a spider wasp’s gender. Large prey tend to give females and small prey give males.