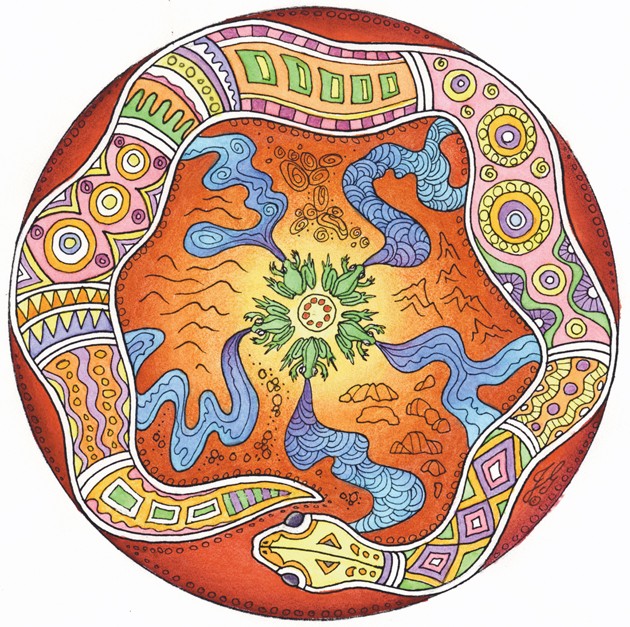 November 9, 2010
Spirit of the Rainbow Serpent

Long ago, in Dreamtime, there were no animals, no birds, no trees or bushes or flowers. There were no hills or streams, no mountains, lakes, rivers, creeks or billabongs. The country was flat and empty, waiting.

One day the enormous Rainbow Serpent, Goorialla, woke from his long sleep under the earth. His waking was sudden. Goorialla was startled and sat up fast and pushed his way to the surface of the earth. When he emerged, he looked around him and saw spread before him as far as he could see all that flat, empty land.

The sight was unfamiliar, and Goorialla did not see his people. So he began to travel in search of people he could call his own.

He traveled all the way to Cape York. There he stopped and listened to the wind. In that wind he heard the voices of many people. He listened carefully, but he could not understand the many languages. “These are not my people,” he said aloud. “I must travel on.”

As the Rainbow Serpent moved across the land, he left deep gorges, curved and straight, narrow and wide, winding this way and that in his wake. Now and then he thrust his body upward, and in these places he made mountains of granite — some with caves, some sharp, some round, some steep, some gradually rising.

Filled with longing for his own people, Goorialla traveled for a long time, moving everywhere. Everywhere he traveled, he left his tracks behind. When he was tired, he stopped to sleep, and there he left the deep imprint of his large, heavy body in the land.

After a while, the land that had been flat and empty was covered with grooves and gorges, mountains and valleys — the imprint of Goorialla’s body, the tracks of his journey.

Eventually, he had traveled everywhere, but no matter how hard he searched, he saw no one familiar, no one he could call his own. And so at long last, with a heavy heart, he returned to the place he had begun.

When he returned to this place, he saw the frogs leaping this way and that, hurrying out of his way. Their bellies were fat, full of water. They grinned, and Goorialla thought how happy they seemed. He envied them and wished to learn their secrets, so he called to them, “Please come here.”

The frogs had never seen such an enormous creature, and their eyes bulged at the sight of him. Those eyes never did return to normal. (In fact, that’s why frogs have bulging eyes to this day!)

However, he did look interesting, so they hopped closer to study him. But their bodies were so full of water, they moved quite slowly. They took one hop forward and called, “We’re coming; hold on and we shall reach you.”

“We’re trying,” the frogs said. They leaped again, and as they did, the water in their bellies bubbled and gurgled and bobbed.

Goorialla grew impatient. It seemed they would never be close. “Leap faster,” he said. “Leap farther.”

“Our bellies are too full,” the frogs complained.

So Goorialla moved toward them.

When he reached them, he began to tickle their bulging bellies. As he tickled, the frogs began to giggle. “Stop!” they gurgled. “Stop, you’ll make us laugh!”

Goorialla tickled them again, and sure enough, they began to laugh, and as they did, water flowed out of their wide, big mouths. More and more water poured out, rushing across the land. Before long all those tracks and hollows and gorges and trails that Goorialla had created with his body were filled with water.

Soon the land, once flat and empty, was filled with rivers and lakes, lagoons and billabongs and creeks. Before long the gurgling and swirling and bubbling and whooshing of all that water woke the other animals and the plants, and all the creatures came into being.

Some say it is Goorialla, the Rainbow Serpent, who had always carried every animal tribe inside of him. They say those creatures were only waiting to be born, and when it was time, Goorialla pushed his way out of the earth and called to all the animals to come out of their sleep.

Others tell the tale of Goorialla’s people. They say he at last found them, and he taught them to dress and dance. But one night a huge storm rose up, and the waters poured down from the sky. Two brothers, bil-bil and Rainbow Lorikeet, were rushing about seeking shelter. They came to Goorialla’s tent and cried to him, “Please keep us dry!”

Goorialla hurried them inside, but fearing they would drown, he swallowed them to keep them safe. But then he was afraid that the others would not understand, and so he fled to the top of the tallest mountain he could find.

When the rains stopped, and the sky cleared, the people went in search of the boys. They found Goorialla on the mountain top, and he confessed. “I have swallowed the boys.”

They say the people cut open Goorialla’s belly to free the boys. When they did, out flew rainbow-colored birds, and ever since that day, the skies have been filled with those birds.

Alas, in his despair, Goorialla vanished. Some say he dived under the sea, and others say he disappeared into the sky.

These days, when storms clear and clouds drift away, a rainbow appears in the sky, and people say the rainbow is the spirit of Goorialla.