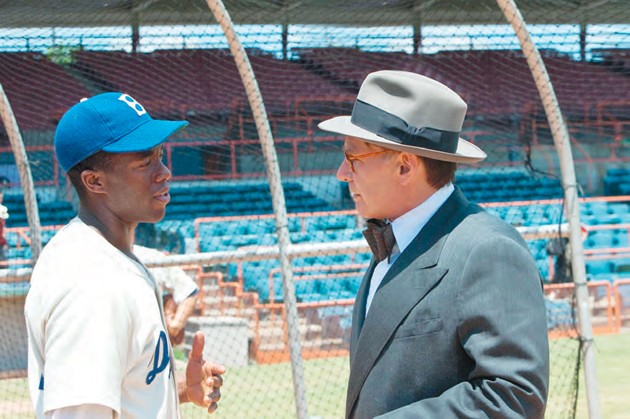 The melting snow and warmer temperatures mean spring, yes, but maybe more importantly they mean a break in the long, cold stretch of lesser movies dumped on us in the last couple of months. Here are a few of the most talked-about releases that, like green grass and blooming flowers, are not far away.

Oz: The Great and Powerful

Disney’s prequel of “The Wizard of Oz” is slick and stylish, to say the least, and it stars some pretty heavy hitters — James Franco as Oz, Michelle Williams as Glinda, Mila Kunis as Theodorah and Rachel Weisz as Evanora. Beyond the aesthetics, though, “Oz” seems to have retained the quirky magic with a macabre edge that colors Frank L. Baum’s original stories. This movie could indeed be great and powerful.

Monsters, aliens, animals, toys and even dinosaurs have all had their time to shine in animated children’s flicks, so I guess it’s the caveman’s turn to become a Happy Meal toy. Early reviews are positive for this story about a caveman family forced to relocate after an earthquake disrupts their home. While the strength of a vocal cast by no means predicts the quality of the movie, Nicholas Cage, Ryan Reynolds, Catherine Keener and Emma Stone probably help.

Because now that the “Twilight” franchise movies are over, how will Stephanie Meyer make more millions? I cannot even begin to explain the plot in the space allotted here, but think kind of a postapocalyptic chick flick with an “Animorphs” twist, for anyone who remembers that series. Saoirse Ronan stars as Melanie Stryder, a girl at odds with the alien symbiote forced inside her brain. It should be interesting, at least, to see how they pull off the pages and pages of inner dialogue between Melanie and her alien. Yeah, it only made marginally more sense in the book.

Twenty years ago, the sight of dinosaurs chasing children and eating adults broke new ground in realistic CGI, not to mention sparked fear and wonder of extinct giants to a new generation. But what’s better than computer-animated dinosaurs eating lawyers off of toilets? Computer-animated dinosaurs eating lawyers off of toilets in 3-D, of course! Yeah, it’s just a gimmick and retroactive 3-D is never as good as inprocess 3-D, even if you’re into that sort of thing. And who hasn’t seen it a million times by now, but I’ll probably still see this one all the same.

A movie about Jackie Robinson? Well, it’s about time. “42,” named for Robinson’s jersey number, stars Chadwick Boseman as the legendary baseball player, with Harrison Ford as the Dodgers’ manager, as well as Alan Tudyk and Christopher Meloni. The trailer itself is inspiring, and this movie could hit it out of the park.

Ashton Kutcher steps out of his lowbrow comedy groove to play one of the most recognized (and revered, in some circles) icons of our day — Apple co-founder Steve Jobs. “jOBS” casts Kutcher as Jobs from the time he drops out of school and founds Apple (with Steve Wozniak, played by Josh Gad) and through his ascension to the man who changed much of how we see the world. But while giving Kutcher a shaggy haircut and a beard certainly makes him look like the late innovator, is it just putting lipstick on a pig?

Robert Downey Jr.’s fourth turn as billionaire playboyturned- superhero Tony Stark finds him with his back against the wall and forced to rely on his own instincts and ingenuity to survive against a vicious foe, played by Ben Kingsley. Don Cheadle reprises his role as Stark’s military friend, James Rhodes, while Gwyneth Paltrow is back as love interest Pepper Potts. Every frame of every trailer has been painstakingly analyzed by nerds around the world for months; hopefully it will live up to the hype (and surpass “Iron Man 2”).

Man, May is going to be a good one for fanboys. At least as hotly anticipated as “Iron Man 3,” J.J. Abrams’ sequel to his rebooted sci-fi series puts the crew of the Enterprise in peril in more than one way. Details on that peril, though, have been kept tightly under wraps, as has the exact role of Benedict Cumberpatch, the movie’s villain. Secrets lead to speculation, of course, and there’s plenty of it on the interwebs to be cleared up when this thing finally opens.

Not to let cavemen have all the fun, this animated children’s movie magically transports an Amanda Seyfriedvoiced girl, Mary Katherine, into a secret universe under siege by the evil Queen Tara (voiced by Beyoncé). Based on William Joyce’s illustrated children’s book, “The Leaf Men and the Brave Good Bugs,” this could easily sink or soar. The fact that the plot involves “fun and whimsical characters,” called Leaf Men, is at once worrisome and encouraging, as Johnny Knoxville, Aziz Ansari and Colin Farrell appear to be in their ranks. And the first trailer does look pretty good, so this might live up to its name.