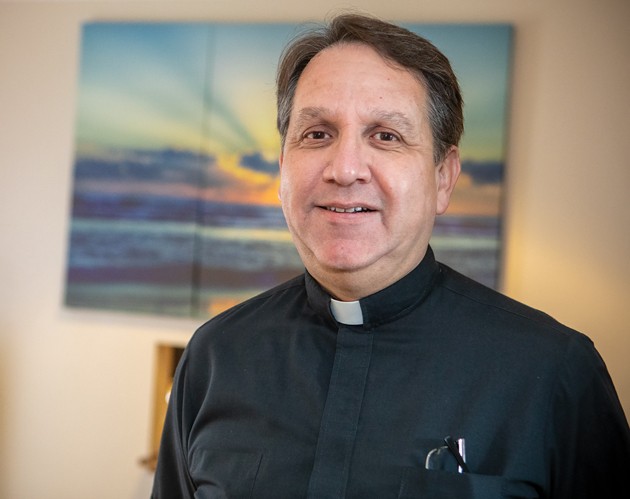 Rev. Kenneth Vialpando is moving from being pastor at Saint Marguerite Catholic Church to Vicar for Clergy at the Catholic Diocese of Salt Lake City. Father Vialpando’s last mass as pastor will be Sunday, August 11.

The Rev. Ken Vialpando will celebrate his last mass as pastor of St. Marguerite Church on Sunday.

Vialpando was appointed as vicar for clergy in the Catholioc Diocese of Salt Lake City.

He has been serving as vicar for clergy on a limited basis since February, working one day a week at the pastoral center in Salt Lake City while he also served as pastor at St. Marguerite. After Sunday, he will work fulltime as vicar of clergy in the Diocese.

“I’ll be kind of like the human resource person for 61 priests and 68 deacons,” he said. “I’ll be there for their joyful times and in their sorrowful times.”

The vicar for clergy attends to the needs of clergy, deals with complaints and comments, welcomes and orients priests new to the diocese, helps new priests adjust, oversees preliminary investigation and maintains updated information regarding possible civil litigation regarding clerics, according to Vialpando.

Vialpando was born and raised in Tooele City. He attended Harris Elementary, Tooele Junior High School and graduated from Tooele High School in 1979.

After graduating from high school, Vialpando served in the Marine Corps for three years before entering the seminary. After seminary, he served for one year as a Navy chaplain and three years as a National Guard chaplain.

He served as a religious education teacher at Judge Memorial Catholic High School and as parochial vicar at St. Therese of the Child Jesus and St. Ambrose parishes. He has been pastor of the parishes of St. Pius X and Our Lady of Guadalupe.

Before receiving the call to return home to Tooele in 2016, Vialpando served for 12 years as pastor of St. Joseph Catholic Church in Ogden.

“It is very unusual for a priest to return to his home church,” Vialpando said. “I will miss my family, friends and parishioners.”

Vialpondo said he may return to Tooele as a substitute for the new parish priest or perform marriages or conduct funerals as requested.

During his three years at St. Marguerite, Vialpando said the parish worked successfully at bridging the gap between between English speaking and Spanish speaking communities to become one community.

“We all speak the language of the love of Christ,” Vialpando said. “We work and walk together in unity as one body of Christ.”