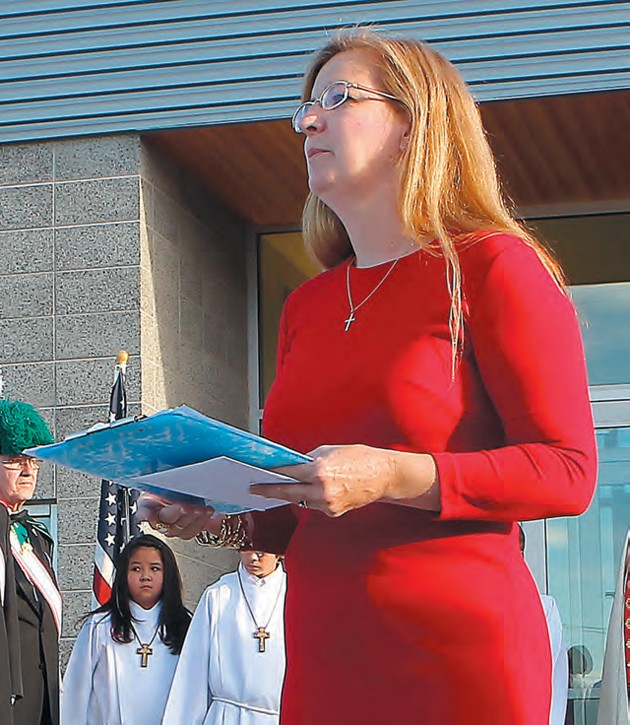 Marcella Burden gives an address on Aug. 17, 2011. Burden resigned from her position as principal of St. Marguerite Catholic School Wednesday following the investigation into alleged miscounduct by faculty.

The principal of St. Marguerite Catholic School in Tooele resigned late Wednesday afternoon following the completion of an investigation into alleged misconduct by faculty and staff.

Parents were informed by a recorded phone message from the Catholic School Office of the Diocese of Salt Lake City that Marcella Burden, principal of St. Marguerite Catholic School, had resigned.

The diocese accepted the resignation, which was effective immediately, according to the recorded message. Burden has been the school’s principal since 2007.

Her resignation came 24 hours after the diocese announced that it had reinstated faculty and staff that were suspended pending the outcome of an investigation into alleged alcohol consumption at a Feb. 28 luncheon in the cafeteria.

Students were reportedly present in the cafeteria when the alleged incident occurred. The investigation by the diocese concluded that no children were directly involved in the use of alcohol.

“Few, if any, of the faculty or staff besides the administration actually had a drink that contained alcohol,” according to an email sent to parents from Sister Catherine Kamphaus, superintendent of Catholic Schools for the Diocese of Salt Lake.

The individuals suspended were to be reinstated as of 10 p.m. on March 6, and letters of reprimand placed in their files, according to the email from Kamphaus.

But by 5 p.m. that day, Burden’s resignation was announced.

Prior to the principal’s resignation, some parents told the Transcript-Bulletin that they were dissatisfied with the diocese’s response to the incident. “This is too mild for what happened,” said Hilary Makris, a parent with two children enrolled at the school. “I don’t drop my kids off at a bar for school. Education and alcohol don’t go hand in hand.”

She felt a boundary had been crossed by the faculty that shouldn’t have occurred.

Makris didn’t demand for Burden’s resignation but felt that a suspension of two weeks, two months, or until the end of the school year would have been more appropriate than a few days, she said.

Other parents had stronger feelings.

“I’m devastated,” said Toni Bench, Wednesday afternoon before Burden’s resignation was announced. “I will pull my child out of St. Marguerite School if the principal is allowed to return.”

State law prohibits the possession or use of alcohol inside or on the grounds of any public school building, but the law is silent about the use of alcohol at private schools like St. Marguerite Catholic School.

Tooele County School District has a policy that forbids the possession or use of alcohol on school property.

The Wednesday email from the diocese indicated that the incident involved a “lack of professionalism and the violation of safe environment policy.”

“It’s sad that it had to come to this,” said Makris. “But I’m grateful that the principal took it upon herself to resign.”

Christine Nielsen has been named acting principal. The school’s enrollment is over 150 students, and teaches kindergarten through the eighth grade.