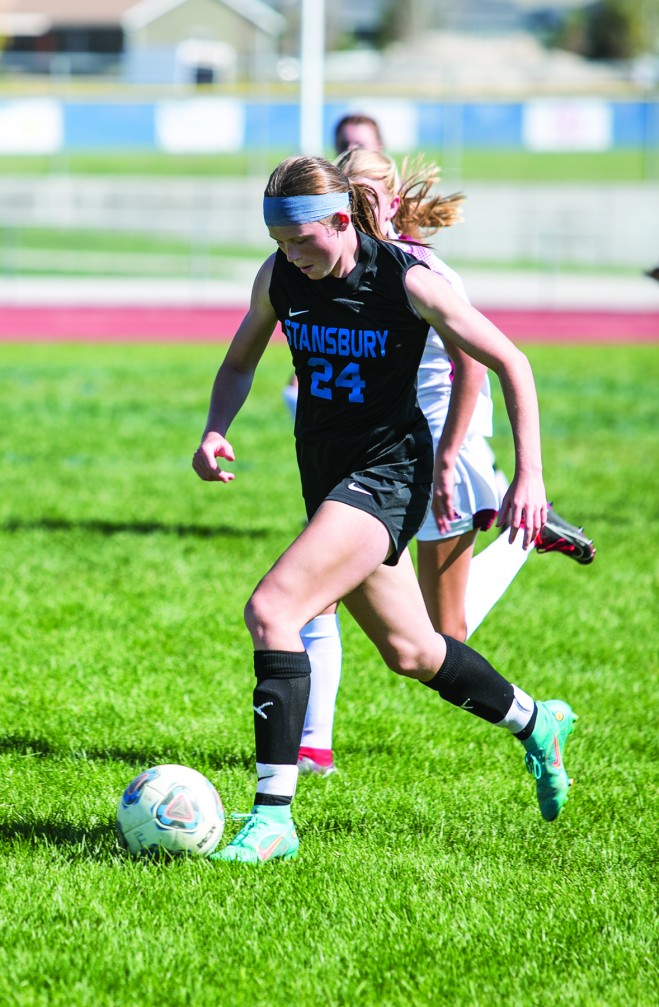 In its ninth game of the season, the Stansbury Stallions girls soccer team faced an undefeated Cedar Valley Aviators team seeking to win its eighth-straight match.

Playing host to the 7-0 Aviators, the Stallions looked to improve upon their early 6-2 record in the second game of 5A Region 7 play.

Early on, the Aviators controlled the pace of the game, hemming Stansbury into their own end of the pitch and recording quality scoring opportunities against the Stallion defense.

Despite the lack of time in the offensive zone, the Stallions stymied Cedar Valley by playing solid defense. After the sluggish start, Stansbury started to come alive and spent more time in Cedar Valley’s end. Then, at the 26:39-minute mark of the half, Stansbury forward Gracee Alders scored the game’s first goal off a free kick to put the Stallions ahead 1-0.

Following the goal Stansbury continued to force the issue, but an untimely penalty gave the Aviators a chance to knot the game up with a penalty kick. During the kick the Aviator’s forward put the ball past goalkeeper Lola Gardner. The game settled in during the last couple minutes, with both teams heading into the end of the half tied at one goal apiece.

As the second half began, the Stallions and Aviators played each other closely and neither gave up any early scoring opportunities. When the Aviators eventually did get a quality scoring chance, Gardner was quick to bail her team out with a great save to negate the Stallions’ broken play.

Stansbury seemed to be fueled by the stop and at the 28:51-minute mark, Emily Coleman outran several Aviator defenders, sped by the goalkeeper and netted the team’s second goal of the game. The go-ahead point proved to be the game winner and the Stallions held on to win 2-1.

Stallions head coach Spencer Call was impressed by the team’s intensity and willingness to fight for every ball.

“We played 25 girls today and they all gave their best effort,” Call said. “I’m really proud of that.”

Despite giving up the goal on the unfortunate penalty, Call said the team rebounded well and played with short-term memory.

“You’ve got to move on to the next play and I thought they did a good job of that in the second half.”

Call cited the play of goalkeeper Lola Gardner as the ultimate turning point that rallied the team and helped win the game for Stansbury.

“She really inspired us,” Call said. “Our team really feeds off her hustle, determination and her sure-fire hands.”

“Nothing was going to get behind Lola in the second half,” he said.