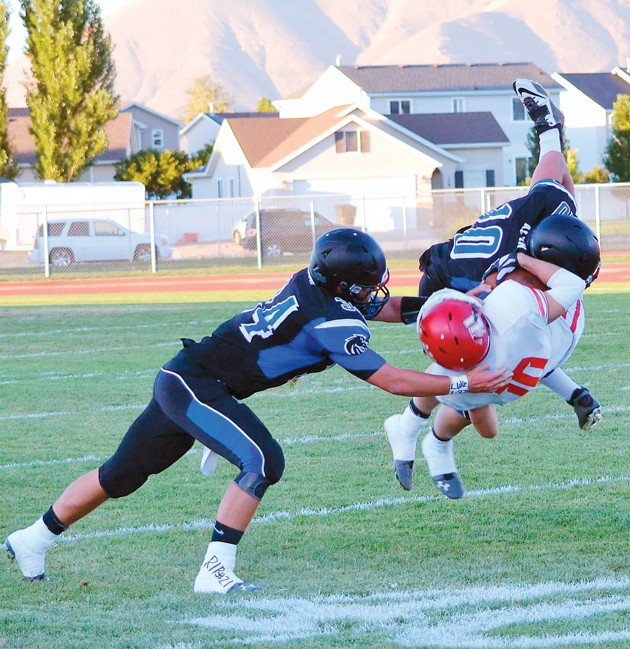 All Stansbury needed on offense was to complete a pass to get going against Uintah. After missing on his first seven attempts in a sloppy first half, Gage Manzione found Landon Stice in the flat and Stice did the rest for a 76-yard touchdown for a 14-6 lead at intermission.

That pass broke the ice for the Stallions. The senior quarterback came back and tossed three more touchdowns in an impressive second half where the Stallions outscored visiting Uintah 35-0 to open 3AA North Region with a 49-6 victory Friday night in Stansbury Park.

After a sluggish first half where Stansbury only led by eight points, the Stallions broke open the game and showed that they belonged at the top of the region standings. The Stansbury defense was stingy and only allowed 70 yards while gaining 493 yards of offense in their region opener.

Manzione completed only five passes but those passes went for 186 yards and four touchdowns while rushing for a touchdown late in the game. Stice and Casey Roberts each caught two touchdown passes for Stansbury.

On the first drive of the game, Stansbury flexed their muscles and drove down the field. Josh Griffith, Manzione and Gavin Skogg each had rushes that converted a first down for Stansbury and then McCoy Didericksen finished off the drive with a 2-yard touchdown run to give the Stallions a 7-0 lead only 1:53 into the game.

Stansbury didn’t have as much success on their next two drives as they had a turnover on downs and then a lost fumble deep in their own territory.

Kedric Coonis recovered that fumble late in the first quarter that gave Uintah the ball 35 yards away from tying the game. Haden Bunderson opened the drive with a completion to Talon Strong for 12 yards and then Bunderson finished off the drive himself after faking a handoff and carrying the ball 23 yards to the left side of the field for a touchdown. A failed extra point kept Stansbury in a 7-6 lead with 3:02 left in the opening quarter.

The fumble wouldn’t be the only mistake that Uintah forced Stansbury to make, but it would be the only one they would capitalize on. Vaisa Maile recovered a botched Stansbury snap and Uintah got the ball 30 yards away from a score, but was forced to punt by the Stansbury defense.

Jurey Beddes was able to intercept a pass late in the second quarter that gave Uintah the ball only 11 yards away from the end zone. A Uintah holding penalty and the stingy Stansbury defense helped to force a turnover on downs.

That Stansbury defensive stand must have sparked the Stallion offense as Manzione found Stice on the first play of the drive in the flat and Stice ran the rest of the way for a 76-yard touchdown pass that gave the Stallions a 14-6 lead heading into halftime.

Uintah came out with energy to start the second half, but the Stansbury defense stifled the Utes on their opening drive and essentially the entire second half. Uintah didn’t earn a first down in the second half as their drives in the final two quarters either ended with a three and out or a turnover.

While the Uintah offense was stalling in the second half, the Stansbury offense was finding its stride. It only took two plays on the first Stansbury drive of the second half to score when Manzione found a streaking Roberts down the middle of the field for a 51-yard touchdown and a 21-6 lead with 9:49 left in the third.

Uintah had a turnover on downs on its next drive when the Utes got great field position after a solid kick return by Beddes to the Stansbury 37. Griffith had a pair of rushes for Stansbury on its ensuing drive that of 8 and 13 yards to keep the Stallions’ drive alive. Manzione capped the drive for Stansbury with a pass over the middle to Stice to give Stansbury a 28-6 lead with 2:08 left in the third.

The Stansbury passing game helped to tack on more points as Manzione tossed his fourth and final touchdown pass, this time to Stice crossing over the middle for a 38-yard touchdown and a 35-6 with 11:12 left in the game.

Disaster struck the Uintah offense as they lost a fumble on the first play and gave Stansbury the ball only 5 yards away from another score. Manzione provided another score, this time with his feet as he crossed the goal line from a yard away for a 42-6 lead with 10:09 left in the game.

Stansbury tacked on another score before the end of the game as Mitchell McIntyre took a hand off 30 yards through the Uintah defense for a 49-6 lead with 4:04 left. That would be the final points for Stansbury as the clock ran out.

Stansbury, now 3-1 overall and 1-0 in region, will travel to Ogden on Friday to face Ben Lomond for a game at 7 p.m.