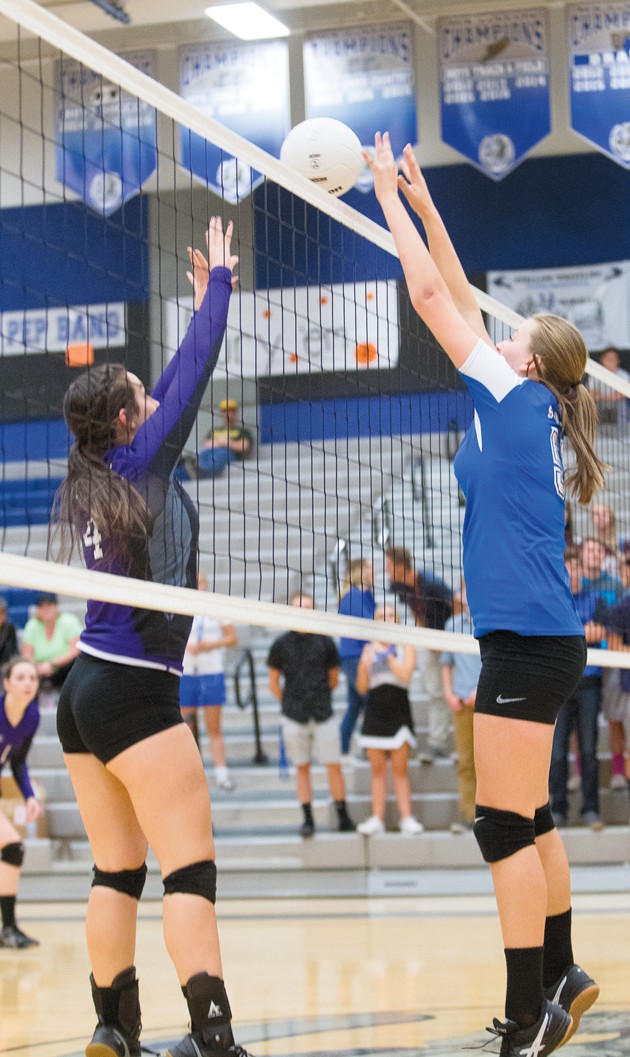 Tooele’s Kati Shields (4) and Stansbury’s Mckenzie Brady (51) joust for a ball at the net during the five-set rivalry match earlier this season. Tooele will face Desert Hills and Stansbury takes on Dixie in the first round of the state tournament. (Francie Aufdemorte/TTB photo)

After having captured the region’s final two berths to the Class 3A state volleyball tournament, Stansbury and Tooele are set against some tough matchups against top teams in the first round.

The Stallions have already played Dixie this season at the Bingham Claim Jumper tournament in the beginning of October, a 27-25, 24-26, 15-9 loss.

“We feel confident about that, that we’ve seen them before and there’s not going to be a ton of surprises there,” Stansbury head coach Erika Smith said. “I have to give so much credit to my team. I’ve said from the very beginning that we were going to surprise some people, and I think we’ve accomplished that.”

The Flyers are fresh off straight-sets wins over Snow Canyon and Hurricane on Tuesday and Thursday. Dixie’s last loss came by two points to Delta in the Bingham tournament — Dixie exacted a 2-0 result in a rematch during the next day of the tournament’s action.

While the Stallions have won two of their last three league games, this year’s squad has exceeded most expectations by even making it to the tournament after graduating seven seniors and breaking in a new head coach.

This year’s Stansbury team is mostly made up of underclassmen. Junior outside hitter Cassidie Hoffmann leads the team with 144 kills while fellow junior Sami Oblad has another 131. Sophomore setter Samie Bryant has 339 assists, and junior Sienna Riggle leads the team in blocks with 34.

“We’ve just got to act like we’ve been there before. I mean, a lot of our players are pretty inexperienced and they don’t have a lot of experience in the state tournament. It can be intimidating even if you have been there before,” Smith said. “It’s a pretty hectic environment and it takes a lot of confidence to go in there and stay focused.”

Should the Stallions advance, they will face the winner of the match between Region 11 champion Morgan and Region 12 No. 4-seed Canyon View, which match is scheduled to also begin at 5:30 p.m., but on Court 3. The second-round winner’s match is scheduled for 8:30 p.m. on Court 2.

If Stansbury falls to Dixie, they will play the loser of the Morgan/Canyon View match at 8:30 p.m. in the consolation bracket for a chance to win three matches for sixth place.

“I couldn’t be more proud of the girls and the hard work that they’ve put toward getting to this goal,” Smith said.

The Buffaloes also have their work cut out for them.

Tooele head coach Kristi Brown said her team will need to look to exploit matchups in order to defeat Desert Hills, a team that ran the table in the tough Region 9 and only lost 14 sets in a 19-7 season. The Thunder haven’t lost since going 2-5 in the Durango Fall Classic, pitting elite high school teams against each other in Las Vegas, Nevada.

“As far as going up against Desert Hills, which of course has been doing really well this year, we’re just going to have to bring our best game forward,” Brown said. “I think we just need to go in with a really positive outlook.”

The Buffaloes are fresh off a five-set win over second-place Union on Tuesday’s Senior Night.

Senior Raegen Root led the team with 16 kills in that match, adding to her season total of 193. Fellow senior Rayah Nielson has chipped in another 151. Sophomore setter Sadee Simmons leads the team in aces with 46, and assists with 281.

Should the Buffaloes advance, they will play the winner of the match between Region 11 runner-up Juan Diego and Region 12 No. 3-seed Richfield, which is scheduled to begin at the same time on Court 1. The second round winner’s match will be played on Court 3 at 7 p.m. Wednesday.

Should Tooele fall to Desert Hills, the Buffs will face the loser of the Juan Diego/Richfield match in the consolation bracket at 7 p.m. on Court 4.

Should Tooele and/or Stansbury advance to the second day of competition in either the winner’s bracket or the consolation bracket, those matches will begin at either 11 a.m. or 12:30 p.m. on Thursday, depending.

“For most, it’s seemed like a real up-and-down season,” Brown said. “But I am really proud of my team and what we’ve accompllished so far.”