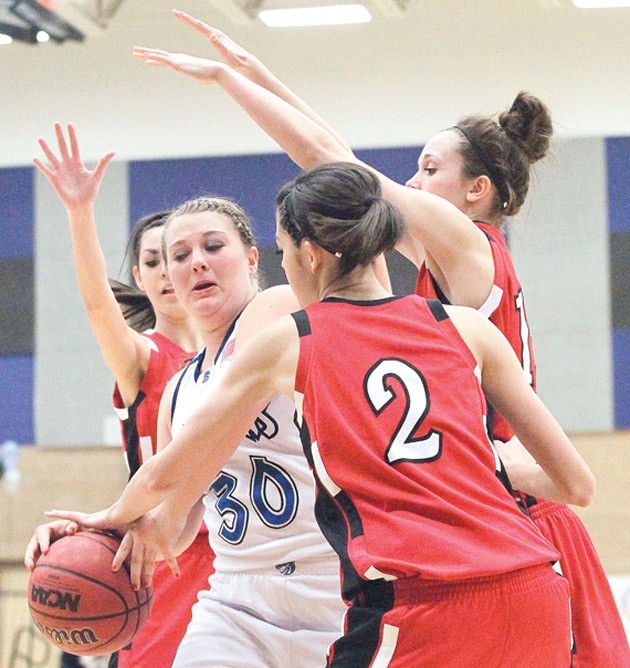 Stansbury High School senior Karlee Manzione (30) tries to hold on to the basketball as Grantsville’s Shayla White, Jessy Davis and Kara White guard her Tuesday. Stansbury secured a playoff spot with its win against Grantsville.

Maybe the lengthy pre-game ceremony put players in lala land for the first 3 minutes of the game because neither team could muster a basket.

Finally, Stansbury’s Bailey Wilson buried a 15-foot shot to break the ice, and the Stallions were off and running en route to a 45-22 victory over winless Grantsville. The victory puts the Stallions in a tie with Ogden for third place in Region 11 with Tooele one game back. The region season ends Thursday with Stansbury at Ben Lomond and Tooele at Bear River.

“This is the first group of players we’ve had for all four years since we started the program, and they symbolize what Stansbury girls basketball is all about,” said coach Kenzie Newton in the pre-game ceremony.

Newton said Manzione is a competitor who’s not worried about individual glory but just wants the team to win. “She’s a gamer and competitor and lays it all out on the line whether rebounding or diving for a loose ball. She’s a vocal leader and does all the little things to help the team,” the coach said.

“Becca (Lords) is an awesome defender with a ton of great qualities. She makes it tough on offensive players with her great defense and that has helped us in practice with her guarding or players to make them better. No matter whether she’s starting or coming off the bench she’s all for the team,” Newton said.

“Erika Alvey has gotten better and better every year and making those three foul shot against Ogden to help us win that game is something we’ll remember forever. The first time we played Ogden she made 11-of-11 foul shots and the second time she made 10-of-10. She gets after our players sometimes when they aren’t taking things seriously and she has credibility with them because she’s such a good player and works so hard,” Newton said.

After Wilson broke the ice, she hit another outside shot and the Stallions started to convert at the foul line. They made six foul shots to push the lead to 10-0 with 1 minute left in the first quarter. Grantsville avoided being shut out in the opening quarter when Shayla White sank a 19-footer to make the score 10-2 after the first quarter.

Stansbury started to make steals with their full-court press, hit from the outside and converted at the foul line in the second quarter to expand their lead to 26-6 at intermission. Stansbury ended up hitting 19-of-32 shots from the line for the game while the Cowboys made 4-of-8. Erika Alvey scored two field goals in the second quarter, Rachel Prescott scored two baskets and Kallie Stewart scored one. The rest of the points came from the foul line.

Grantsville’s 4 second-quarter points came on a foul shot from Kara White and a 3-pointer from Amy Matthews.

The Cowboys started to hone in on the bucket in the first 3 minutes of the third quarter. Shayla White knocked down a 7-footer and then her sister Kara rejected a Stallion shot. Jessy Davis then sank a 6-foot baseline shot to cut the lead to 26-10.

Erika Alvey didn’t want the Cowboys to gain too much confidence, and responded with a pair of 3-pointers within 1 minute. Shayla White added another basket between Erika Alvey’s baskets to make it 32-12 with 4 minutes remaining in the third quarter. The Cowboys kept up with the Stallions in the third stanza with both teams scoring 10 points.

Each team used several players in the final quarter with the Stallions outscoring Grantsville 9-6.

Grantsville hosts Ogden Thursday to close out the season. The Cowboys have lost 53 consecutive games.