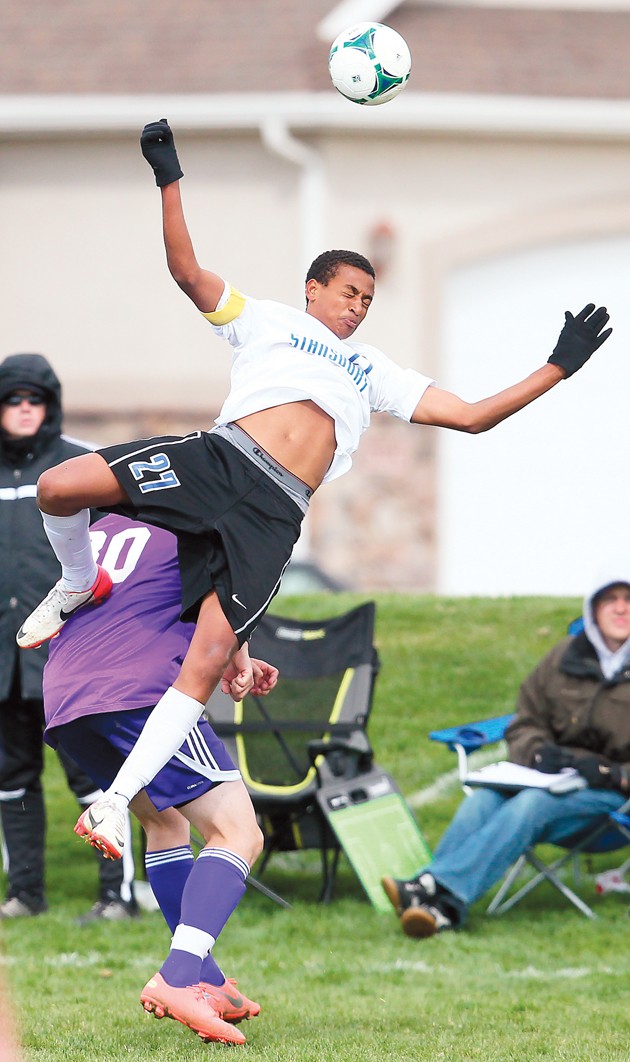 Stansbury High School’s Jara Eshete heads the ball Tuesday against Tooele. Eshete has been a scoring machine with six goals in the last three games.

March was cold for the Stansbury soccer team in more ways that one. The weather was frigid and snowy, and the team’s performance was a little chilly too.

The Stallions posted a 1-4 record the first month of the season.

“We only had one preseason game and our practices were all inside,” said high-scoring left midfielder Jara Eshete. “Now that we’ve had some time outside we’re finally getting used to playing together. We’re gaining momentum.”

Eshete has been a scoring machine with six goals in the last three games. He opened the scoring in the Tooele game with a header at the 33rd minute. Eshete scored all three of Stansbury’s goals in a 3-0 shutout at Bear River Friday, and scored twice in the lone April loss at Ben Lomond.

Stansbury’s defense and the goalkeeping of Ian Thompson have been incredible in the month of April. All three victories were shutouts with a 2-0 win at Morgan on April 8, the 3-0  win over Bear River Friday and the 3-0 victory over the Buffaloes Tuesday.

“We couldn’t get the snow off the field this spring so we were just late getting out on the pitch,” said Stansbury coach Brandon Anderson. “Our field has some problems and hopefully we’ve remedied that for next season. We had two games canceled because of snow on the field, and we didn’t have any outside practices and ended up with only one preseason game.”

Back on March 8, Clearfield edged Stansbury 3-2 in overtime on the Stansbury pitch.

Ben Lomond visited Stansbury in the first region game and left with a 4-0 shutout. Bear River came to Stansbury on March 15 and handed the Stallions their third loss of the season. The Stallions picked up their first victory with a 3-0 win at Tooele on March 19, and then lost to Region 11 leader Ogden 5-0 on March 27.

With three region wins in April the Stallions are 4-4 in the league sitting in fourth place only one-half game behind third-place Bear River. Ogden leads the league at 9-0 followed by Ben Lomond 6-2 with Bear River in third at 5-4.

Stansbury hosts Morgan today, hosts Grantsville on Wednesday and finishes up the regular season with a game at Ogden April 26 and a final home game versus Grantsville on April 30.

The Stallions had several scoring opportunities in the first half with several corner kicks against the Buffaloes. Tooele played well defensively, and keeper Mathew Lozano made plenty of spectacular saves to keep the Stallions off the scoreboard.

“We pretty much dominated from an offensive standpoint, and probably should have scored more but you have to hand it to their keeper — he made some great saves,” Anderson said.

Tooele had few opportunities to score with the standout defense from the Stallions led by Bryce Terry, Josh Meyer and Nate Johansen.

Stansbury finally got on the board at the 33rd minute when Eshete headed the ball into the net on a cross from Tyler Williams. Armando Herrera gave the Stallions some breathing room just four minutes later when he blasted the ball inside the net from just outside the box.

Stansbury wrapped up the scoring at the 51st minute when Terry scored on a rebound off a corner kick.

“We seemed to play very well over the first 20 minutes of the game and then we let our guard down a bit and Stansbury took advantage of that,” said Tooele assistant coach Cody Valdez.  “We have had a good run over the last few weeks playing better soccer, but we took our foot off the gas for a while against Stansbury and they made us pay for it by scoring goals.”

With five Region 11 teams headed to post season, Tooele has a good chance to make the playoffs as the final team from region.

“Our team is still staying positive knowing that we control our own destiny as far as the playoffs are concerned. We know that if we win our games against Grantsville (today) and Morgan (next Thursday), we will make the playoffs. This has been a goal for us and will be the first time in over five years that our boys soccer team has qualified for the playoffs.”