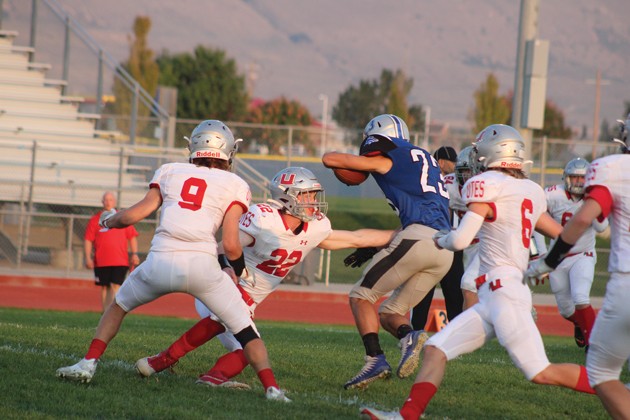 The Stallions limited the Huskies to 85 total yards and five first downs while gaining 307 yards and 17 first downs on the night. Stansbury rushed for 206 yards and passed for 101.

Stansbury limited its turnovers to one and forced four Hillcrest turnovers in the victory.

The Stallions used a stable of running backs to prevail with four players carrying the ball four times each.

Bushnell scored three touchdowns in the first quarter on short runs of 1 and 2 yards, plus a 15-yard interception return.

Hamilton stole the spotlight in the second quarter with a 15-yard TD reception from Topham, and a 55-yard punt return for six points.

Baker grabbed a fumble late in the second quarter and raced 45 yards to complete the first-half scoring with the Stallions up 41-0.

Stansbury added two more TDs in the third quarter. Harris connected on an 18-yard TD toss to Rowley, and Topham intercepted a Hillcrest pass and ran to the end zone for a 35-yard TD.

Midway through the fourth quarter the Stallions scored a final TD on a 3-yard run by Kapono Serrao.

The Stallions will entertain Tooele (5-0) on Friday in a cross-valley rivalry game. The first RPI rankings were released on Monday and Tooele came in as fifth in 5A and the Stallions10th. Region 7’s Timpanogas Timberwolves (5-0) were listed as sixth in the first RIP rankings. Stansbury will host Timpanogas in the final regular season game on Wednesday, Oct. 13.