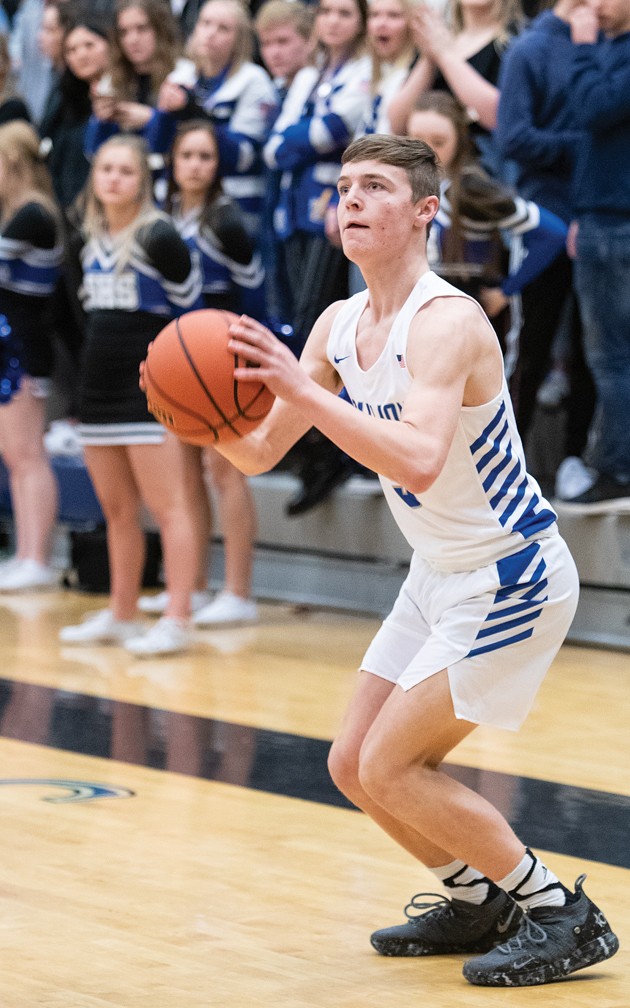 Stansbury’s Peyton Thevenot shoots a 3-pointer from the corner during a home game against Ben Lomond last season. Thevenot is one of five seniors on this year’s Stansbury basketball roster, and hopes to help lead the Stallions to their first-ever region championship this season.

With the success of Stansbury’s football, baseball, cross-country and wrestling programs, the Stallions’ boys basketball team has often found itself overshadowed since the school opened in the fall of 2009.

This season, the Stallions aim to change the perception that Stansbury isn’t a basketball school. And, with most of their top scorers back from a year ago, the Stallions expect to be right in the hunt for their first-ever region championship.

“I think the kids have put in a lot of time during the summer and have gotten better,” Stansbury coach Joe White said. “I think they understand their roles now. Every year, they understand what I’m expecting and the play call gets easier and they know exactly what to do.”

Peyton Thevenot leads a talented group of five seniors returning this season. He set a school record with 70 3-pointers and averaged 16.5 points per game after transferring from Tooele High before the start of his junior season.

“Last year, I showed everyone what I could do,” Thevenot said. “This year, people are going to game-plan for me, but I’ve just got to play through it. If they’re guarding me super tight, one of my teammates is going to be open.”

White said Thevenot’s fiery personality on the court is a major boost to his team and rubs off on his teammates.

“I think he’s always been there,” White said. “He’s a great shooter, but what I don’t think we understood was how competitive he was. He has that kill-or-be-killed mentality. He loves to play the game.”

Jaden Jenkins is another key returner for the Stallions, averaging 9.4 points and 4.0 rebounds per game last year to go with a team-leading 51 assists and 32 steals. While teammates like Thevenot and Payton Gaillard can shoot with the best of them from the perimeter, Jenkins is more of a slasher and gives the Stallions someone who can drive hard to the basket.

“I remember being here my freshman year and how much it’s changed over four years,” Jenkins said. “It’s progressed a lot. It’s my last year — my senior year — so I want to make it a good one.”

Gaillard presents a matchup nightmare for opponents, given that he has the body of a power forward and the shooting stroke of a shooting guard. He exploded on the scene late last season, hitting 15 3-pointers over a span of four games — including an 18-point outburst against Juan Diego and 12 more against Park City.

“I used to be a guard freshman year, and now I’m one of the bigs,” Gaillard said. “Now, I just work inside, work outside and focus on what I’m supposed to do.”

Kaden Taylor is looking forward to playing a bigger role this season for the Stallions. Last year, he scored 44 points in limited action, with his best all-around game coming in a loss to Hillcrest when he had six points, five rebounds and a steal.

“I’m very excited,” Taylor said. “I believe we’re capable of our first region championship, and I guess we’ll see what happens from there. I need to play my role, just doing what I do best — rebound the ball and helping my teammates out.”

Kobe Otasua is another player eager to get more time on the court as a senior. This season won’t just be a culmination for him, but a chance to show just how far the program has come as a whole in its four seasons under White’s tutelage.

“I think the expectation is to win region this year, and we’ve got a good chance — one of the best chances in Stansbury High School (history),” Otasua said. “We’ve been running the same system since we were freshmen.”

Stansbury also has the benefit of a very talented group of underclassmen — though they are a little beat up at the moment. Guard Kru Huxford is battling a shoulder injury he suffered as the Stallions’ quarterback during football season, and forward Pae Tia has a knee injury. They will be joined by Dave Spaulding in a strong junior class.

“We’re eight or nine deep (with) kids that can legitimately play,” White said. “It’s a tribute — they want to be basketball players.”

Stansbury will open its season Tuesday night at home against Delta, with a home game against Hillcrest on Wednesday. They will open Region 10 play at home Dec. 17 against county rival Tooele.