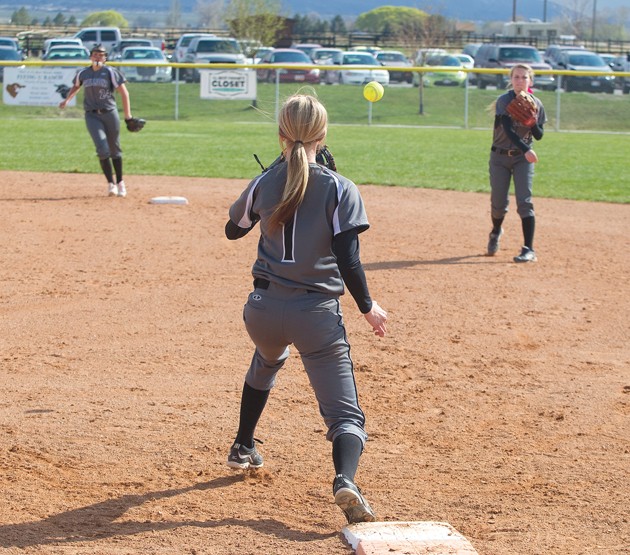 Stansbury’s Beth Chipman picks up an infield grounder and throws it to first baseman Qyncee Horrocks for an out against Tooele in Thursday’s game.

The Stansbury Stallions opened the region season with a 7-3 win against the Tooele Lady Buffaloes last week.

The Stallions (1-0 in Region 11) scored three runs in the first inning to get started, and they held off Tooele (1-1), which blasted Ben Lomond earlier in the week.

“There’s four tough teams in our region,” said SHS coach Bridget Clinton. “Every game is a tough game, and they’re all rivalry games. They all look forward to playing each other, and they all want to go out and beat each other. It’s good because it prepares us for the state tournament.”

Tooele made it interesting with two runs in the second inning to narrow the gap. Both pitcher Lauren Frailey and catcher Whitnie Touhuni got on base after a hit-by-pitch and a walk, and Izzy Nicholas and Hanna Strege came in to run as courtesy runners for the two of them. Rylee Whitehouse then moved the runners over with her sacrifice hit. Trystin Crofts walked to load the bases, which brought up Lexis Bolliger.

She walked as well to score Nicholas and cut Stansbury’s lead to 3-1. A sacrifice by Loryn Fonger then scored Strege to make it 3-2.

THS coach Melanie Nelson said the Lady Buffs need to have a better determination to take advantage of those scoring chances throughout the game.

“We’ve got to have kids that are out for blood,” she said, “that want to be the one in that position and not looking to somebody else to do it, but they want to be the one wanting the ball to come to them. We’ve shown signs of that all season long, and this was an off game.”

Nelson said the result of the game was simple: Stansbury made the plays needed to win, and Tooele did not.

“They were the better team today at bat and defensively,” she said. “We played just basic softball, but it’s a different game. We got emotional; we got tight, and they ran with that. Our kids just need to believe that they can make plays and believe that nobody’s better than them.”

Stansbury pitcher Kimbri Herring helped her own cause while at bat against Tooele in the bottom of the fourth inning, which led to Janessa Bassett putting the game out of Tooele’s reach.

Herring started the rally with a double to right field, and Kamryn Grover came in as a courtesy runner. Alyssa Warr then put the ball in play for a sacrifice that moved Grover to third base. Qyncee Horrocks was hit by a pitch and then stole second base to have both runners in scoring position with Bassett at the plate.

Bassett slapped a double that scored both runs to make it 5-2.

“We lost some power from last year, but we’ve got some good contact hitters that hit well in situational counts,” Clinton said. “They really do the little things to manufacture runs.”

Clinton said the defense is what made the difference for the Stallions.

“Our defense makes the play and (at bat) find ways to score runs,” she said. “I think what worked for Kimbri today was that our defense made some good plays for her. She got rattled there in the first inning when the umpire called a couple of illegal pitches on her. She settled down, and it always helps when your offense comes back and scores some runs so that you can relax a little bit.”

The Stallions tacked on two more runs in the bottom of the fifth inning, and the Lady  Buffs added a run in the top of the sixth.

Stansbury next plays at Grantsville on Tuesday, and then it plays host to Bear River on Friday. The Bear River game is the first meeting between the two schools since they played in the semifinals of the state tournament last year.

Tooele has the week off until Friday when it hosts Grantsville.

All four teams have winning records overall and should make for an interesting competition for the region championship.

“It’s going to be fun to see how it shakes out and where everybody falls come state,” Nelson said. “It’s a fun region.”