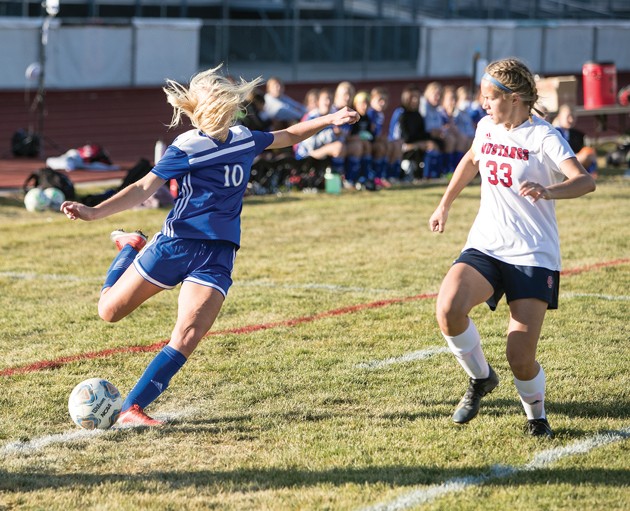 Stansbury’s Reagen Didericksen (10) gets a shot off with her hair in her face as Crimson Cliffs sweeper Emalee Plewe defends during Wednesday’s Class 4A second-round state tournament game at Stansbury High School. Stansbury’s season came to a close as the visiting Mustangs picked up a 1-0 win over the Stallions.

October 15, 2020
Stallions fall to Mustangs in 4A tournament

Crimson Cliffs scored the only goal of the game Wednesday afternoon in a 1-0 victory over Stansbury in the second round of the Class 4A girls soccer state tournament at Stansbury High School.

Jantzyn Lossee was able to get past one last defender and find the net with just under four minutes left in the contest to give the visitors the victory and a trip to the quarterfinals to host nearby opponent Snow Canyon on Saturday.

The Stallions produced fewer shots on goal than the Mustangs, but Reagen Didericksen nearly tied the game with a close-in shot in the final 40 seconds.

Late in the first half, Stansbury (11-6 overall) had an early chance to score with the Crimson Cliffs keeper out of position, but the attempt came up empty.

The loss snapped a five-game winning streak for the Stallions, who entered the state tournament as the No. 5 seed in Class 4A. Stansbury will lose eight seniors to graduation, including Didericksen, Osborn, Sebrina Brown, Mallory Clark, Samantha Coleman, Marissa Durrant, Elyssia Harris and Makenzie Matkin.