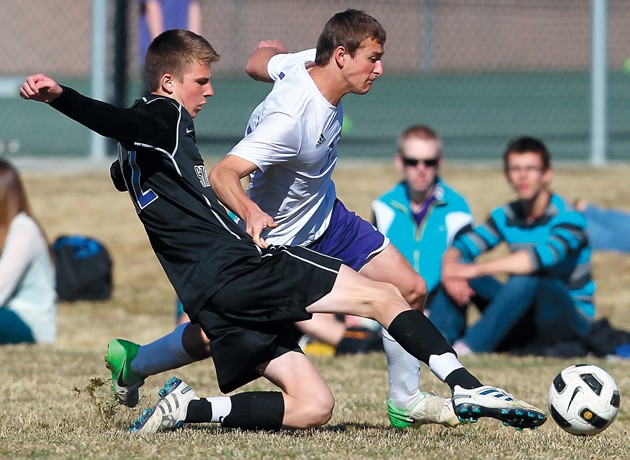 Stansbury High School’s Nathan Johansen and Tooele’s Jordan Shields battle for the ball Tuesday. The Stallions defeated the Buffaloes 3-0 for their first region win of the season.

With both teams desperate for their first region victories, the Stallions prevailed ♦

Stansbury grabbed a 1-0 lead in the second minute of the game on a goal from Travis Hansen, and it never looked back in a 3-0 boys soccer victory against Tooele.

The first goal came on a corner kick before most people even had a chance to realize the game had started. Then after a deflection in the goal box, Hansen kicked the ball into the back of the net.

Stansbury coach Brandon Andersen said his players needed a little regrouping after starting the region schedule with two losses. He said this win was the product of letting his team relax and enjoy playing soccer.

“We let the kids take control of their fate,” Andersen said. “Everybody knew how important the games were this week. They knew what was on the line. They knew that if you keep dropping games, playoffs start to get farther and farther away. We gave them the freedom on Monday to take destiny into their own hands. We freed them up and left them alone.”

Andersen said he wanted to let his players get their heads right and take control. So the seniors and team captains were able to rally the troops and reset their game.
“I was proud of them today,” Andersen said. “We came on the pitch, and immediately we were pressing. The kids did what was right. They did what was needed. That was the game plan, and it was their game plan. It wasn’t the coaches’ game plan. They did what they were supposed to, and they took it to their rival team.”

Hansen’s first half goal marked the first of several scoring opportunities the Stallions had. The rest of those shots missed wide or high, but that didn’t matter to Andersen. He said he was happy the shots were available, and hopefully as the season progresses those shots will start to go in.

Jara Eshete had a head attempt in the seventh minute that hit off the post; he then had a kick that sailed high in the 10th minute. Junior Calderon streaked down the side and attempted a shot from left to right that missed wide in the 16th minute. Ernie Montes had a breakaway attempt in the 29th minute where Tooele recovered quickly and eventually cleared the ball after a Stansbury corner kick. Eshete had a breakaway chance in the 34th minute, but Tooele’s Dalton Drake stole it away and cleared it. Freshman Clayton Holdstock had a scoring chance he missed left of the net after taking a pass that Eshete bounced off his back. Finally, Darius Johnson had a scoring chance in the closing minutes of the first half on a head attempt. He missed the shot left, and Stansbury went into halftime with only a 1-0 lead to show for their scoring chances.

The Stallions made adjustments and came back out firing once again. Then in the 54th minute, Eshete was fouled in the goal box and received a penalty kick. He easily knocked in the penalty kick to give Stansbury a 2-0 lead. Stansbury’s final goal came in the 72nd minute when freshman Nathan Johansen scored off a failed clear attempt from Tooele. He put his foot on the deflected ball, and it sailed into the net for the 3-0 score. A fourth goal nearly scored for the Stallions when Johnson attempted a header in the 78th minute that missed.

The biggest message Andersen wanted to send to his players leading into this game was to not worry about dropping the first two region games. He said the season isn’t over yet, and they’re still very much alive for the playoffs.

Tooele assistant coach Cody Valdez said the Buffaloes were a little stunned following the early Stallion goal, but they finally recovered. He said the biggest problems were their own mistakes.

“All three goals came off of set pieces,” Valdez said. “Obviously they scored the goals, but they came off of our mistakes that gave them that opportunity to score. They didn’t beat us except the fact that they made us make mistakes.”

Valdez said the players have been working hard, but they just didn’t come together as a team and had a lack of communication.

“Our touches were off,” he said. “(We) just didn’t have the possession we needed.”

The Buffaloes had some good scoring opportunities of their own in the second half. In the 49th minute, Jordan Shields found Brandon Eldredge for a scoring attempt, but the Stallions were able to clear the ball away. Nathan Fisk had a free kick, but no goal came from that as well.

The Buffaloes are currently battling some injuries, and Valdez said he hopes to have everyone at full strength soon. Their next game is another rivalry game when they head on the road Grantsville to battle the Cowboys, who are also looking for their first Region 11 win this season. That game takes place at 3:30 p.m. Friday.