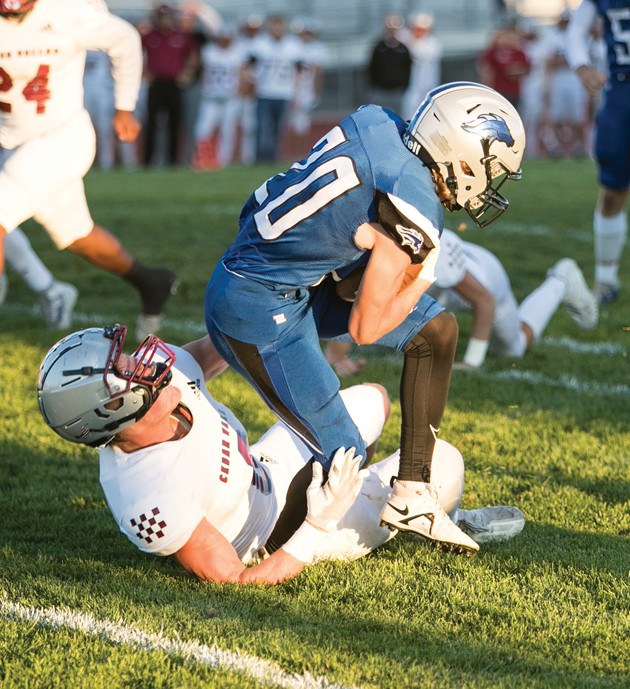 With a perfect 10-0 season under its belt, the Stansbury Stallions football team is ready to roll into its first playoff game this coming Friday.

Having won each game by an average margin of 32 points and boasting players in the top-10 of the state in several categories, the regular season alone could be considered a resounding success — but Stallions head coach Eric Alder and the rest of the team don’t see it that way.

“We’re happy with what we were able to accomplish and feel good that we were able to go 10-0, but the general attitude is that it was just the first step,” Alder said. “We’re hungry for more and I certainly think everyone’s got aspirations to be even better than what we’ve been.”

In the last meeting between these two teams, the Stallions handily beat Cedar Valley by the score of 45-7. Ezra Harris threw for 172 yards and two touchdowns, tacking on another three touchdowns he rushed into the end zone himself.

Harris and his teammate running back Mateaki Helu will be two x-factors the Aviators will have to be especially on top of, as the pair have been giving opponents fits all season long. Harris averaged 211 passing yards per game, in addition to averaging 96 rushing yards which, in all, contributed to over 40 touchdowns.

For Helu, his 115-yard per game average rushing the ball placed him 32nd in the state, which amounted to 14 touchdowns over the past 10 games. His 15 total touchdowns placed him at 16th-place in Utah, with an 18th-place ranking for 92 total points also under his belt.

Stallions receiver Dylan Hamilton also contributed greatly to the teams’ success as well, on both sides of the ball. Hamilton led all players on the team with seven interceptions, in addition to leading the pack with 100 receiving yards per game and scoring 20 total touchdowns.

Alder reiterated that the season accolades, while noteworthy, aren’t the end-all-be-all for his team.

“Our goal is to be the best we can on a daily basis,” he said. “I don’t think anyone feels like we’ve arrived anywhere yet — there’s still more goals yet to be accomplished this season.”

Looking ahead to Friday’s game, he added that the message he wants to get through to the players is to be confident and comfortable in their ability to succeed. All season long the team’s core focus has been on three areas: effort, execution and being at their best when the best is needed.

“Football still comes down to doing the basics very, very well,” Alder said. “And this year, when our best has been needed it’s been there.”