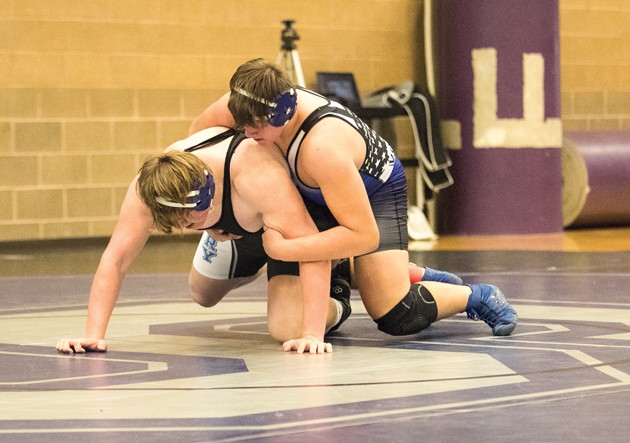 Stansbury teammates Ethan Vorwaller (top) and Matt Ingersoll compete in a 285-pound match during the AK-47 Duals on Dec. 12 at Stansbury High School. Both wrestlers will advance to the Class 4A state tournament on Feb. 20 in Richfield, as Ingersoll won the 285-pound championship and Vorwaller finished third at 220 pounds during the Class 4A Division B tournament in Vernal on Saturday.

Stansbury sends 13 to 4A state tournament ♦

It was a strong showing for the Stansbury wrestling team at the Class 4A Division B tournament on Friday and Saturday, as the Stallions finished fourth out of 10 teams at the two-day state qualifier at Uintah High School in Vernal.

No Stallion had a better tournament than 285-pound senior Matt Ingersoll, who captured the division title in his weight class with a spotless 4-0 weekend. Ingersoll needed just 45 seconds to pin Canyon View’s Luke Langston in his first match, but things got tougher from there. He was up to the task, scoring a 9-1 major decision over Bear River’s Carson Pond in the quarterfinals and a narrow 2-1 decision over Dixie’s Kenneth Ericksen in the semis. In the finals, he got past Ridgeline’s Damiem Boehme in a 3-2 decision to earn a No. 1 seed in the Class 4A state tournament, set to take place Feb. 20 at the Sevier Valley Center in Richfield.

Jordan Hammond also reached the division final at 145 pounds, earning a 15-3 major decision over Uintah’s Christian Hartle, a 9-5 decision over Ridgeline’s Owen Munk and a pin against teammate Warren Welch. Hammond will go into the state tournament as a No. 2 seed with a 29-6 overall record after a tough 5-4 loss to Ridgeline’s Brenden Gessel in the final.

Eleven more Stallions will also be making the trip to Richfield for the state tournament, having finished eighth or better in their respective weight classes. Brandon Ploehn (113 pounds) finished third, posting a 4-1 record, and Xander Howard (195) bounced back from a quarterfinal loss to Pine View’s Ryder Hendry by pinning Hendry in the third-place match. Ethan Vorwaller (220) went 3-1 with three pins — two of which came against Pine View’s Corben Gifford — to earn a No. 3 seed for the state tournament.

Zane Kanirie was 3-2 at 152 pounds and finished seventh, and Braydon Allie earned a return trip to the state tournament with an eighth-place finish at 170. He pinned Pine View’s Eli Trombley in 56 seconds in a consolation-bracket match to clinch his spot.

The state tournament will be a one-day event this season, leading to alterations in its format. Instead of having the semifinal losers compete in the consolation bracket, they will automatically be placed in the third-place match, making it so no wrestler has to compete in more than five matches in the tournament.