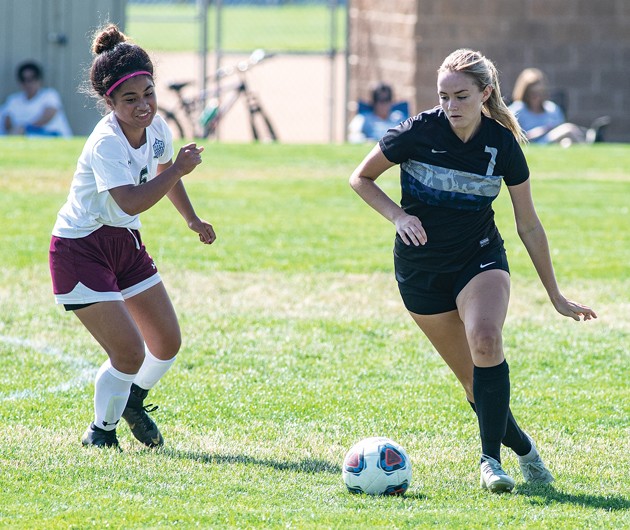 The Stansbury girls soccer team was down in its home opener against Class 6A Jordan on Thursday afternoon, but the Stallions weren’t out of it.

And while their rally ultimately came up one goal short in a 2-1 loss to the visiting Beetdiggers, there was plenty for the Stallions (0-1-1) to be happy about after the final whistle sounded.

“We were just right there,” Stansbury coach Spencer Call said. “They were all commenting after the game that last year, they would have given up and lost by three or four or five (goals). They were pretty proud of themselves that they hung in there, gave them a game and got back (in it).”

Despite a relatively strong start, the Stallions found themselves behind 1-0 in the 23rd minute when a quick turnover near the right post allowed Jordan’s Kailey Brecke to slip a quick shot past Stansbury goalkeeper Ainsley Thurber. Stansbury had several chances to tie the game as the first half progressed, including a pair of free kicks by Rylie Klenk and a point-blank shot by Reagan Didericksen that was turned aside.

However, it all went awry in the final moments of the half as Elsie Tafuna squeaked a shot past Thurber in stoppage time after a free kick. The Stallions’ sophomore goalkeeper very nearly made the save, but the ball trickled just over the goal line.

Stansbury came out determined to make a game of it in the second half, though Jordan (1-0) didn’t make things easy. Kirsten Oldham sent a shot over the crossbar in the 43rd minute for the Beetdiggers, and teammate Hannah Babinski rang one directly off the bar one pointe later. Thurber also made a diving stop on Brecke in the 46th minute.

The Stallions were finally rewarded in the 66th minute on a picture-perfect shot from senior Gracey Hinton. Hinton and Danica Silvestri worked a give-and-go along the right side, and Hinton blasted a shot that found its way past Jordan goalkeeper Camryn Miller and into the top left corner of the net.

“A sense of urgency and just connecting more passes — that’s kind of what I thought it was,” Call said of the difference in the Stallions’ second-half effort. “I think they were a little intimidated because they’re a big 6A school and they’ve got a lot of good players, but I think we showed that we’re just as good or maybe a hair behind them.”

Nine minutes later, Silvestri nearly tied the game, only to have her shot be turned away by Miller’s diving stop. Miller also smothered a free-kick attempt by Silvestri in the 79th minute to preserve the Beetdiggers’ victory.

“Probably the most encouraging thing right now is that there’s a a sense of unity amongst them,” Call said. “They all really like each other. There’s a really good defensive mentality, and the offense is very, very close to scoring, breaking out of their shell and getting a lot of goals in the back of the net.”

Stansbury continued its preseason schedule Tuesday afternoon in Garland against Bear River. The Stallions will return home to face Taylorsville on Friday afternoon.