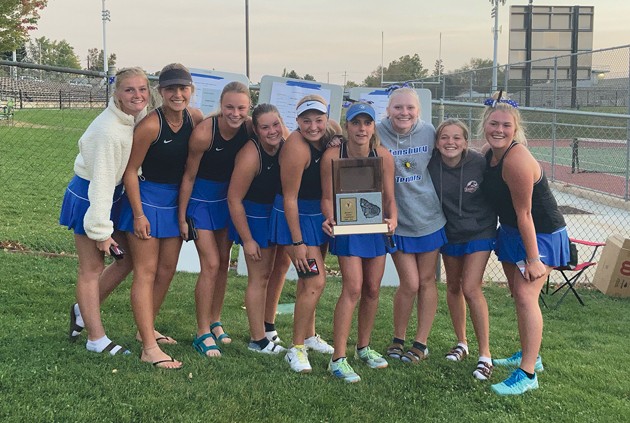 The Stansbury girls tennis team had a successful season this fall, but the Stallions came into the Region 10 tournament in Ogden with one more prize left to win — a prize that had eluded them for each of their previous 11 seasons.

On Thursday, the Stallions finally won that elusive region championship, putting an exclamation point on the team’s most successful season to date. Everyone the Stallions took to the region tournament finished either first or second, which bodes well for Stansbury going into the Class 4A state tournament this Friday and Saturday at Liberty Park in Salt Lake City.

Anna Jones won the region championship at third singles, which gives her a first-round matchup against Canyon View’s Kiera Hunt at the state tournament. Alison Witkowski and Maylee Didericksen were the region champions at second doubles, and will face Logan’s Staeli Ellis and Norah Perry in the first round.

Stansbury’s Taylor Sasser and Ceili Crawford finished second in the third doubles bracket to wrap up their season, as there is no bracket for third doubles at the state tournament.

Tooele will send both of its doubles teams to the state tournament, along with a pair of singles players. Madeline Shepard was the Buffaloes’ top finisher at region, finishing fourth in the third singles bracket to earn a first-round matchup against Mountain Crest’s Sidney Nielson. Hannah Sheppard was fifth at second singles and will face Region 9 champion Tia Turley of Desert Hills in the first round. Cately Jensen and Camilla Pankratz finished fifth at first doubles and will face Region 11 champions Olivia Phillips and Alice Wilkinson of Green Canyon, and Marynn Hamilton and Brinley Dunn were fifth at second doubles and will meet Region 9 champions Taylee Anderson and Brooklyn Price of Desert Hills.